A Grade I Listed Building in Horton Kirby, Dartford, Kent 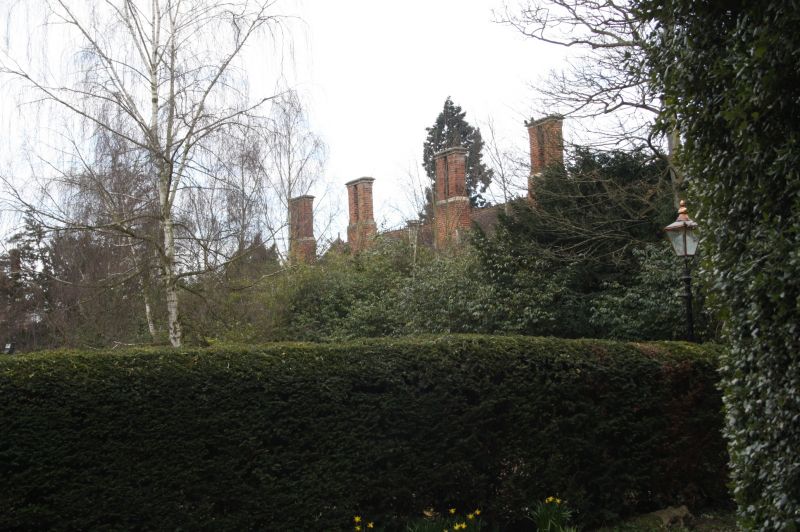 HORTON KIRBY FRANKS LANE
1.
5280
Franks Hall
(formerly listed as
Franks)
TQ 56 NE 3/176 1.8.52
I
2.
This house was built in 1591 by Lancelot Bathurst (died 1594). The original
mansion was on the other side of the river but was very damp so it was abandoned
and a new house built. It is a square building of 3 storeys. Red brick on a
tall base of knapped flints. Tiled roof. Casement windows in stone surrounds
with stone mullions and transoms. The entrance front faces east. The centre
of 2 windows is recessed with a parapet over it having a small pediment in the
centre surmounted by a finial. Advanced wings of 2 windows each edged with long
and short stone dressings. The centre windows have 2-lights, in 2 tiers on the
first floor and in 3 tiers on the ground floor. The windows flanking these have
a similar arrangement of 4-lights each. The outermost windows are bays of 2 tiers
of 6-lights on the ground and first floors. Stone doorway left of centre with
Doric columns on tall bases, triglyph frieze and curved pediment flanked by
finials. This leads into a recessed porch. The north or garden front has 5 windows
of 2 tiers of 3-(and one of 4) lights and similar dressings flanking it.
A gable surmounted by a finial at each end, and in the centre 3 projecting chimney
breasts topped by 3 octagonal shafts each. The south front is somewhat similar
but has only 2 chimney breasts, placed just within the outer gables. Six windows.
Large bay window of 2 tiers of 6-lights left of the centre ground floor window with
a strap work parapet over it. The west front has 4 windows and a projecting central
octagonal turret. The C19 wooden cupola which surmounted it has been removed. The
interior has very fine plastered ceilings, one dated 1591, stone fireplaces,
panelling and late C16 staircase.
See Country Life Article 26th July 1913.