A Grade I Listed Building in Mattersey, Nottinghamshire 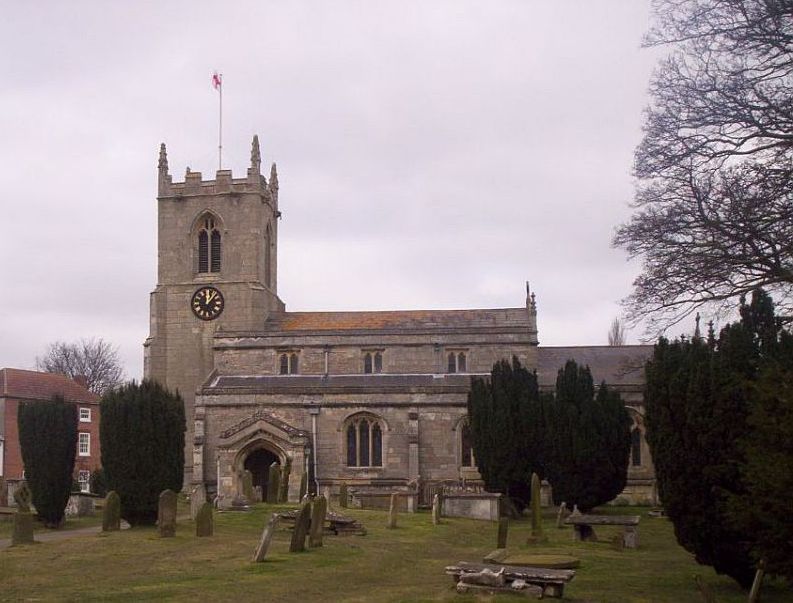 Parish Church. C13, C14, C15, restored 1866. Ashlar with
fragments of coursed rubble. Slate roofs, ashlar parapets with
single ridge crosses at the east end of nave and chancel.
Buttressed, set on a plinth with string course running over and
with guttering under the parapet. Tower, nave, north and south
aisles with north chapel and south vestry, south porch and
chancel. The diagonal buttressed tower of 2 stages has a
restored, arched 3-light window with reticulated tracery,
cusping, hoodmould and label stops. The bellfry has 4 arched 2-
light openings with panel tracery and cusping, with hoodmould and
label stops over. Under, on the south and west sides, are single
early C20 clock faces. There are 2 gargoyles to all but the west
wall, which has a single remaining one. The parapet is embattled
with single crocketed pinnacles at the angles. Abutting the
north west corner is a stair turret with 2 small fixed lights.
The west wall of the north aisle with some coursed rubble has an
arched 2-light window with panel tracery, hoodmould and label
stops. The diagonally buttressed north wall has an arched
doorway with wooden door and hoodmould with worn label stops.
There are 3 late C14 3-light windows all with cusping, flat
heads, hoodmoulds and label stops, the 2 on the right have
reticulated tracery, the one on the left has tracery with cusped
mouchettes. The east end of the north chapel, with fragements of
coursed rubble, has an arched window with 3 lights, panel
tracery, cusping, hoodmould and label stops. The north
clerestory has 3 2-light windows with cusping under flat heads.
To the east, above the parapet, is a single crocketed pinnacle.
The diagonally buttressed east end has a restored, arched, 5-
light window with panel and reticulated tracery and hoodmould and
label stops. Above the parapet, at the angles, are single
crocketed pinnacles. The east window of the vestry has a
restored, arched, 3-light window with tracery, cusping hoodmould
and label stops. The south wall has a restored, arched, 3-light
window with tracery, cusping, hoodmould and label stops. There
is an arched door with hoodmould and label stops and 2 further
arched windows with 3 lights, cusping and hoodmoulds. At the
east end of the parapet is a large crocketed pinnacle. The south
porch arched entrance has single columns either side, with worn
and restored foliate decorated capitals supporting a chamfered
arch with hoodmould and label stops over. At the apex of the
parapet is a damaged finial. The inner doorway has a moulded
arch. The south west window is arched with 2 lights, cusping and
hoodmould. The south clerestory corresponds to the north.
Interior. 3 bay nave arcades, having low octagonal columns and
moulded capitals supporting tall, pointed double chamfered
arches. The north arcade responds consist of compound piers.
The south responds are single moulded capitals resting on
corbels. The double chamfered tower arch is supported on single
moulded capitals, in turn supported on carved heads. A C13 2 bay
arcade divides chancel and north chapel. The central round
column has a moulded capital decorated with a single course of
nailhead and supports double chamfered arches, with a fleur de
lys at the springing of the arch on the south side. The responds
consist of similar single capitals supported on foliate decorated
corbels. The chancel and south vestry are separated by a double
chamfered arch. In the vestry are 2 un-restored, finely carved,
early C14 panels of the workshop of the Hawton Easter Sepulchre,
probably brought from the priory. That on the east wall depicts
St Martin dividing his cloak with the beggar, on the west wall St
Helena finding the true cross. In the south aisle is a late C14
recess under an ogee arch, with foliate decorated finial.
Thought to be the site of what used to be the tomb of Isabel de
Channcey who gave the village to the priory. The south wall of
the north chapel has a small piscina with cusped arch over.
There are 2 small openings in the north wall, probably for
statues. The roof is supported on mid C19 foliate decorated
corbels, with a similarly decorated font. The pulpit and lectern
are early C20. In the east window of the north aisle are
fragments of c1300 stained glass, possibly from the priory. In
the chapel is a wall tablet topped with urn and drapery, to
William Hodges, 1815.