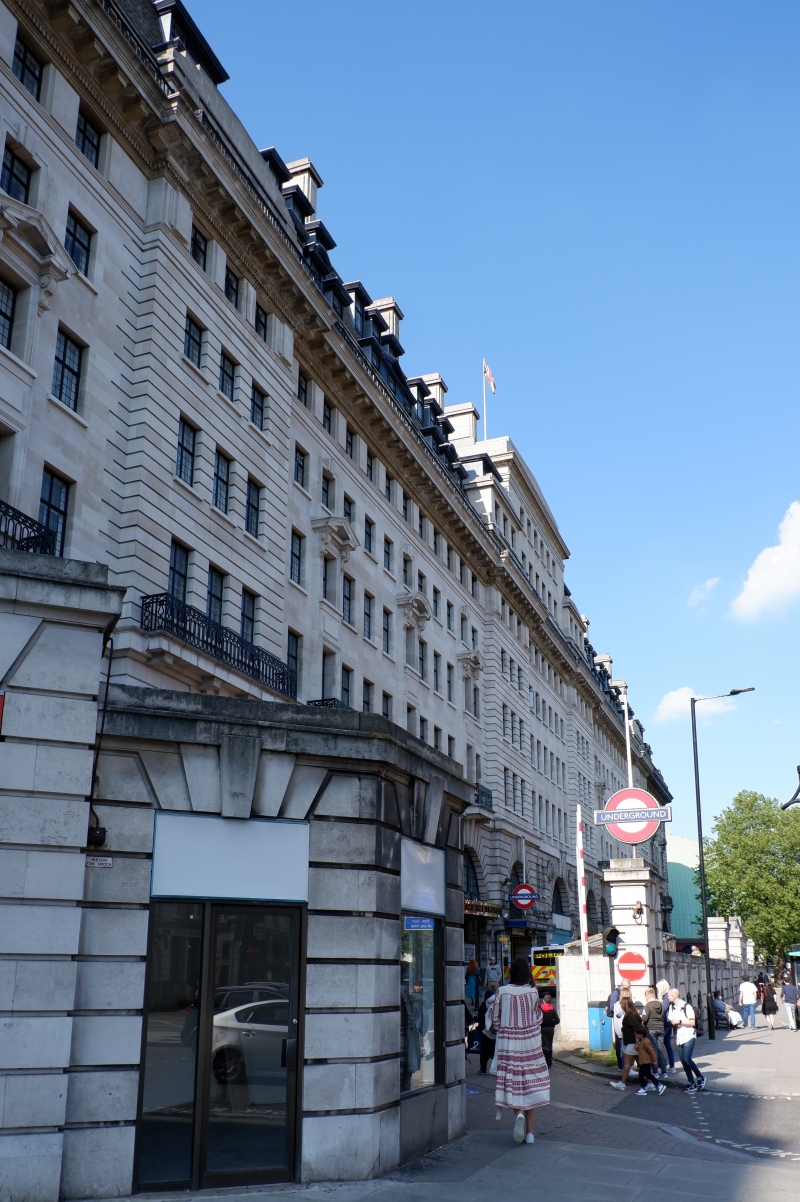 Chiltern Court, the building above Baker Street Station, is not included in the listing.

PLAN: The station entrance building comprises the ground floor of the three-bay centrepiece of Chiltern Court, plus the four adjacent bays to the east. One storey above basement with an upper mezzanine level. Entrance in west bay leads down stairs to large rectangular booking hall; to east of this are offices. Original (1863) sub-surface platforms, now serving the Circle and Hammersmith & City Lines (platforms 5 and 6), run east-west, parallel with the station frontage beneath Marylebone Road. A stair on the south side of the booking hall leads down through a lower concourse to the east-bound platform; the west-bound platform is accessed by a bridge to the left of the stair. Stairs to either side of west end of the platforms probably date from 1863; that on south side more altered; linking bridge between them added 1911; in front of this is a bridge built 1966-7; both bridges linked to modern ticket hall on south side of Marylebone Road. Platforms No 1-4, serving the Metropolitan Line (ML), are accessed by stairs on the north side of the booking hall.

EXTERIOR: Classical frontage of seven tall arched bays with rusticated voussoirs. Central bay of the three projecting western bays has heavy keystone and cornucopian devices to left and right inscribed 'MR' and '1912', and paired narrow windows to either side. Door to left with shouldered architrave inscribed 'LUGGAGE'. Bay to right, originally an exit, is now infilled with a shop, as are the four bays to the east.

INTERIOR: Entrance stair lobby clad in biscuit-coloured faience with roundels. Secondary entrance arch with rusticated voussoirs and keystone bearing elaborate cornucopian device with MR insignia and date of 1912. Round-headed window above with moulded architrave. Booking hall ceiling is coffered with a grid of beams, some straight and others segmental, which are panelled on the faces and soffits, carried on square faience-clad piers with panelled faces and a dentilled cyma cornice. Faience signs on south wall for 'WH Smith and Son' and 'Luncheon and Tearoom', restored 1985. Walls clad in biscuit-coloured faience. Stairs down to east-bound platform have timber handrail and iron balustrade. Entrance to lower concourse has cast-iron screen with glazed overthrow bearing illuminated names of east-bound stations on the outer face and west-bound stations on the inner, surmounted by clock, installed 1925 to control passenger flow during the British Empire Exhibition at Wembley, a distinctive feature of the London Underground. Inset in tall niche in wall to right is a marble WWI memorial to the fallen of the MR, comprising a tablet set within Ionic columns and surmounted by a sculpture of a lion destroying a serpent, erected by the Directors, Officers and Staff of the Company, designed by Charles Clark. Platforms altered at east end 1911-13. East-bound platform is entered through a three-bay segmental arcade with faience-clad columns; the platform vault has been breeched at this point by a three-bay section of jack-arches. Beyond, the platforms are covered by the 1863 broad segmental buff-brick barrel vault of 16 main bays, each with deep lunette set into flanks, clad internally in modern white tiles. Vault soffit repaired 1985 matching original. Footbridges to east and west end. East footbridge lined with glazed brick faience tiling, incorporating oculus inscribed 'MR', probably remodelling of earlier (possibly 1868) bridge. 1911 footbridge at west end, of reinforced concrete, has segmental rusticated arch, and also retains internal tiling, as does stair on north side. Behind this is the 1863 tunnel portal with roll-moulded arch. Remains of basement of 1863 entrance building survive behind north staircase.

Offices to east of booking hall not inspected, but have been modernised. The Bakerloo and Jubilee Line platforms are not of special interest.

SUBSIDIARY FEATURES: Retaining wall to ramped station approach road, built 1911-13, was an integral part of the station/hotel design and originally had a port cochère. Faced in Portland stone with channelled rustication. Arcaded with keyed semi-circular openings with heavy iron grilles, six to either side of the centrepiece which has channelled piers with cornices, flanking two further arches, flanking a memorial. This carries, on the central panel, a bronze plaque recording: 'THIS STONE WAS LAID BY THE HON. LORD ABERCONWAY DC / CHAIRMAN OF THE METROPOLITAN RAILWAY COMPANY 24 JULY 1912 / R H SELBIE GENERAL MANAGER W WILLOX M.I.C.E. ENGINEER'. This is flanked by wreaths and fasces and has a lion's head above; ramped cornice overall. Railings removed. To west is a small triangular rusticated stone pavilion, built 1930 as an entrance to the ML platforms via an existing stair.

HISTORY: In 1854 an Act of Parliament was passed enabling the Metropolitan Railway to construct an underground railway between Paddington and the City, as part of an envisaged 'Inner Circle' linking the mainline stations, to be completed in conjunction with the MR's collaborator, later arch-rival: the Metropolitan District Railway (MDR), inaugurated in 1864. This - the world's first underground railway - was constructed 1860-3 under the supervision of (Sir) John Fowler, the MR's Engineer in Chief, from Paddington, Bishop's Road (now Paddington), and Farringdon Street (Farringdon), with intermediate stations at Edgware Road, Baker Street, Portland Road (Great Portland Street), Gower Street (Euston Square) and King's Cross. The railway was constructed on the 'cut-and-cover' system whereby a trench is excavated and roofed over, a method employed until the 1890s when it was superseded by the deep tube system for electrified trains. Both broad and standard-gauge track were laid.

The original MR station surface buildings were relatively modest, single-storey Italianate buildings in brick and stucco and none survives other than as fragmentary remains. Of the seven, Paddington, Edgware Road, Kings Cross and Farringdon had platforms in open cuttings flanked by brick retaining walls covered by conventional iron-and-glass roofs, while Gower Street, Great Portland Street and Baker Street had sub-surface platforms covered by a brick barrel vault, lit by globe gaslights; these latter stations were thus the first true 'underground' stations. At Baker Street and Gower Street, which were virtually identical, lighting was supplemented by a series of deep lunettes pierced through the vault, lined with white glazed tiles, each of which had a thick glass cover at surface level with ventilation apertures, enclosed by railings. No more of these sub-surface platforms were built due to the noxious atmosphere from steam and gases.

Baker Street station opened on 10 January 1863, comprising a pair of one-storey buildings on the north and south corners of Marylebone Road and Baker Street, each containing a booking office and stairs down to the west end of the platforms. In 1868, two surface-level platforms opened on the north side to serve an extension to Swiss Cottage, later extended to four, with a link to the existing line. From here the line - known as the 'Metropolitan Extension' - was incrementally extended north-westwards into Middlesex, Buckinghamshire and Hertfordshire, reaching Aylesbury and Verney Junction in 1892, some 50 miles from central London. Branch lines were opened from Harrow to Uxbridge (1904), Moor Park to Watford (1925) and finally Wembley Park to Stanmore (1932). The MR absorbed the Hammersmith & City Railway in 1867, and opened a new branch from Edgware Road to South Kensington in 1868. The MR also operated trains on the London and South Western Railway line to Richmond by 1877. The original line was extended to Moorgate in 1865; Bishopsgate (Liverpool Street) in 1875 and Aldgate in 1876. Meanwhile, the remainder of the Inner Circle was constructed by the MDR, from South Kensington (1868) to Tower Hill (1884). The Baker Street & Waterloo Railway (later the Bakerloo Line) opened its station at Baker Street on 10 March 1906.which stood to the northwest of the MR station, interlinked to it by a subway. It was demolished in the 1960s.

The MR deliberately cultivated the image of a mainline company (which in effect it was). The line was electrified by 1907, and in 1911 the MR embarked on a comprehensive rebuilding programme in which Baker Street was to be its new company headquarters and flagship station. This was prompted not only by increasing congestion, but also the drive to exploit suburban expansion to the northwest. Here, the MR enjoyed a uniquely privileged position whereby it was legally enabled to retain surplus land it had acquired for railway development in the late C19. Thus was born 'Metro-land', the term coined by the MR's publicity department in 1915 and used henceforth in MR marketing, and which rapidly entered common parlance as an idealised evocation of northwest London commuterland. Baker Street Station was the 'Gateway to Metro-land'.

The new station was designed by Charles Walter Clark (1885-1972), appointed Chief Architectural Assistant to the Engineer of the MR in 1910 and Architect in 1921. It was intended to form part of the ground floor of a large five-storey, 15-bay hotel carried on a tall rusticated-arcaded ground floor, approached by a long ramp. The station comprised a grand booking hall and concourse at basement level with a ladies' room, buffet, lost property office and WH Smith bookstall among the facilities, providing a modern service comparable to that of a main-line station. To the east were offices, a parcels office and a goods entrance. The MR Extension platforms were remodelled, and to the northeast in Allsop Place an imposing new MR headquarters was built to Clark's design. Building ceased on the outbreak of WWI, and the hotel proposal was superseded by a scheme for mansion flats, named Chiltern Court, designed by Clark in 1927 and completed in 1929.

The MR remained fiercely independent until 1932, having resisted absorption into 'the Combine' which dominated underground railway construction in London until the 1930s. In 1933 the Combine, the MR and all bus and tram networks, were merged into the London Passenger Transport Board, an unsubsidised public corporation, and the MR network became the Metropolitan Line. In 1939, Bakerloo trains took over the ML service to Stanmore. Another entrance was formed further to the west in Chiltern House c1939, linked to the ML booking hall by a corridor. In 1979 the new Jubilee Line took over the Baker Street to Stanmore branch of the Bakerloo line and added an extra northbound platform. In 1990 the section of the ML from Baker Street to Hammersmith became part of the newly-created (or recreated) Hammersmith & City Line.

REASONS FOR DESIGNATION: Baker Street Station is designated at Grade II* for the following principal reasons:

* The 'cut-and-cover' platform vault of 1863 is of major architectural and historic interest as the most complete of only three such sub-surface platforms constructed on the original sequence of stations of the MR, the world's first underground railway. Dramatically pierced by shafts of light from the deep lunettes, it is one of the most evocative and enduring images of London's early underground system.
* The 1911-13 remodelling by Charles W Clark 1911-13 is of more than special interest; most notably for the entrance and booking hall, which are the grandest on the Underground, as befitted the chief station of the Metropolitan Railway and 'Gateway to Metro-land'.
* The retaining wall to the station approach road, an integral part of the original station/hotel concept, is an impressive piece of streetscape which illustrates the MR's grand aspirations for Baker Street, and has strong group value with the station frontage