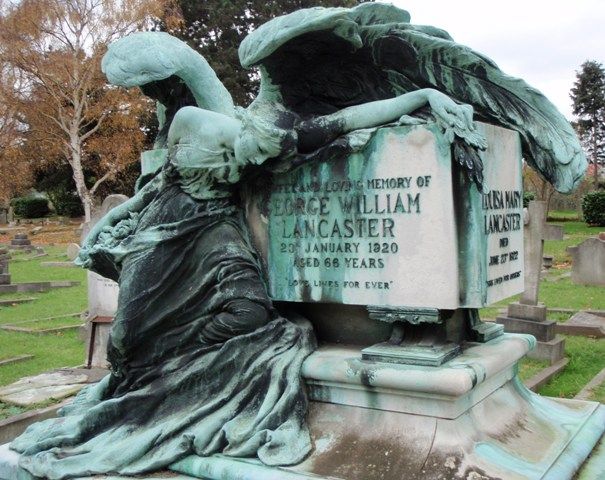 Chest tomb. Memorial to George William lancaster (d. 1920) and
Elisa Mary Lancaster (d.1922) by Sidney march (1876-1967).
Portland stone and bronze. Comprises a loosely draped female
angel in bronze, with roses gathered up in her skirt, mourning
over a rectangular sarcophagus of Portland stone which stands on
a coved base and rectangular plinth, also of portland stone: This
work is influenced by North Italian tomb sculpture (especially
Leonards Bistolfi) and is considered one of the most significant
C20 examples of funerary sculpture. Memorable for the fluid
positioning of the body and the weight-defying droop of the wings
over the stone sarcophagus. Described by Hugh Meller as "Arguably
the most dramatic sculpture in any of London's cemeteries".
Sidney March showed regularly at the Royal Academy between 1901
and 1932 and his best known work was the Canadian National War
Memorial at Ottawa (unveiled in 1939) made in collaboration with
his brothers.
See: Sir Hugh Miller "London Cemeteries" (2nd Ed. 1985).