A Grade II Listed Building in Earlswood and Whitebushes, Surrey 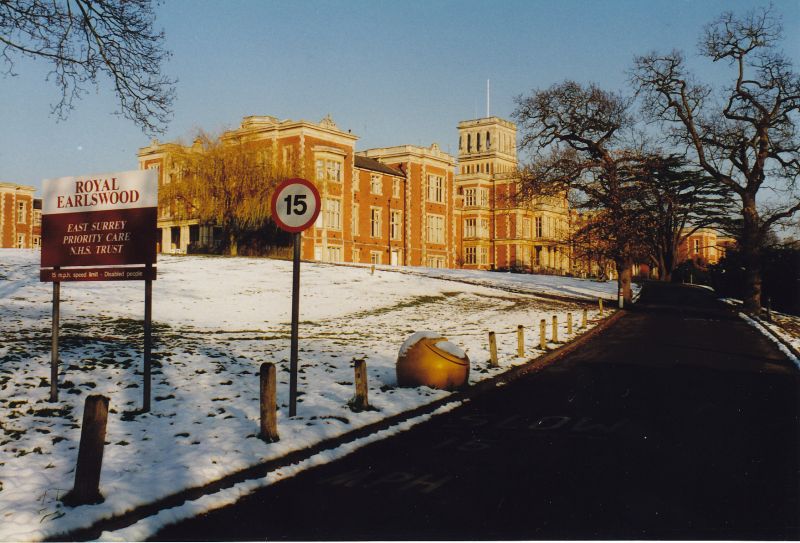 Hospital for people with learning disabilities. Designed by W B Moffatt in 1852 and the 1st asylum in the British Isles built to cater specifically for those with learning disabilities. Previously people with learning disabilities had been put with the mentally ill in lunatic asylums or workhouses. The Rev Dr Andrew Reed believed that they could be trained by careful teaching to lead a relatively normal life in the outside world, working and caring for themselves. This was a charitable foundation paid for by London livery companies. The builder was Mr Jay, the contractor for the Houses of Parliament and the foundation stone was laid by Prince Albert in 1852. Jacobean style, built on a quadrilinear plan orientated south east for fresh air and sunlight. Built of red brick with Bath stone dressings with some Reigate stone to the rear elevation but internal courts entirely faced in stock brick. There is some evidence that the building was originally clad in Reigate stone which was replaced c. 1855. It seems very unlikely that the stone would have been replaced so quickly so perhaps the plans had been altered from building in stone to brick slate roofs, now without chimney stacks. The main or south east front has a central feature of a 5 storey, 90 foot high tower, the top storey of Bath stone with pierced balustrade, 3 round-headed windows and pilasters and similar features below but in red brick. Central 2 storey 3 bay entrance with pierced parapet and curved pediment with blank shield. 1st floor has coupled pilasters and ground floor has recessed portion with 6 Tuscan piers and a flight of steps. On either side in a 3 storey wing with 3 light mullioned windows and to either side are 2 storey semi-basement and attic extensions. The attic storey has 6 mullioned and transomed windows with curved stone pediments. Octagonal roof features with parapets terminating in square taver with pediment and deep moulded. Below are 7 windows with central full height bays and portico and steps on either side in the angle. At each side breaking forward is a 3 storey section with elaborate square tower with pierced balustrading facing inwards and plainer tavers with full height bays facing outwards. South west front has central feature of 2 storeys and attics with 3 curved pediments and tuscan portico flanked by 3 storey towers, 2 storey wings either side terminating in 2 storey towers. Similar treatment to north west front. North west front has some traces of Reigate stone facing and has the later C19 brick isolation hospital unit on to it which is not of special interest. The interior has an entrance hall with imperial staircase of Hopton Wood stone with baluster and paired fluted pilasters. On the landing is a niche containing a bust of the founder the Rev Dr Andrew Reed. Doorcases with carved overmantels and marble fireplace with brackets and round-headed arch. Great hall with hammerbeam roof and pierced gallery with organ decorated with Coats of Arms. Tower has elaborate warden gallery and Board Room has panelled ceiling. Subsidiary staircases are of cast iron in a Chinoiserie derived pattern.