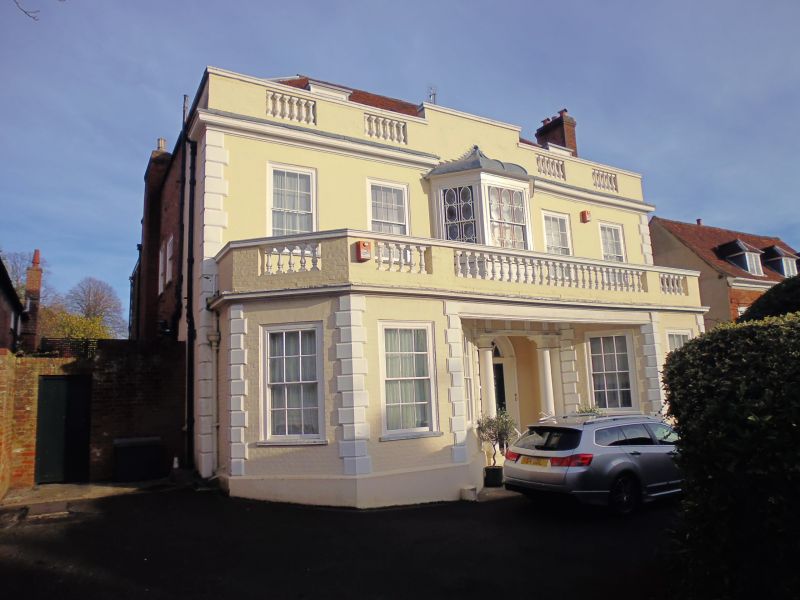 2.
Late C18. 2 storey and attic. Colour-washed brick with chamfered stone quoins
on projecting plinth. Moulded stone cornice; broken in centre to allow for
bay window. Parapet with closed balustrade panels over side windows and raised
central section, all with moulded stone coping. All stone work painted.
Hipped mansard old tile-roof. 2 dormers, small sashes, with moulded cornice.
4 windows, with architrave frames on 1st floor and central angular bay with
angle Ionic pilasters, delicate moulded entablature and ogee hipped lead roof,
probably late C18 and with early C19 sashes of narrow side glazing and pointed
arched top panes. The ground floor treatment consists of 2 large angular
bays with chamfered quoins at angles, moulded cornices and balustrades with
moulded stone coping; the cornice and balustrade has been carried across between
bays at a later period overwhelming the porch. The bays themselves probably
early C19 alterations. The porch is central and set back, and consists of
2 Doric pilasters and 2 columns in antis with entablature of triglyph frieze
and modillioned cornice. On 2 moulded stone steps, with 6-panel central door,
top panels glazed, and arched fanlight of curved diamond pattern with central
lamp in architrave surround with projecting springers and keystone. Good
cast iron lion head knocker. Formerly 2- and 3-storoy later extensions each
side, well set back; these have now been removed, so that the house now has
greater visual unity. 2 large clipped hollies central in hedge along road
form a prominent street feature.

All the listed buildings in Castle Street (East Side) form a group.