Warehouses and General Offices at Western End of North Quay

A Grade I Listed Building in Canary Wharf, Tower Hamlets 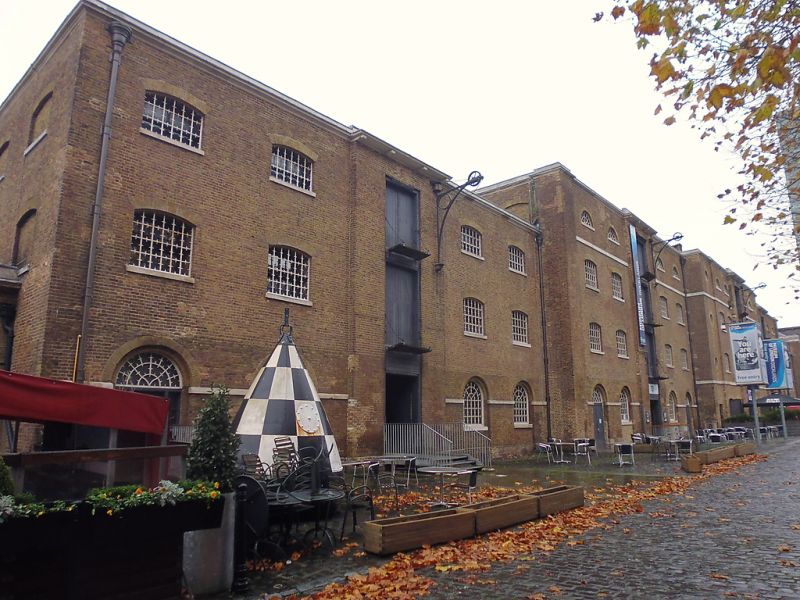 GV I
The warehouses and general offices lie at the western end of North Quay, West India Dock Road. Originally forming part of a range of nine warehouses divided by single-storey link buildings, formerly over half a mile in length, built 1800-4. The original scheme had a 'low warehouse' at west and east ends and in the centre, with 'high warehouses' in between; the 'low warehouses' were raised two storeys in 1827 by John Rennie, bringing their cornices in line with those of the high warehouses. Nos 1 and 2 Warehouses are the only survivors; the rest was destroyed by bombing in World War II. The architects of the scheme were George Gwilt & Son.

Warehouses: Stock brick with Portland stone dressings, the northern elevations of the warehouse in cheaper plum brick. Main blocks of five storeys and attic with semi-basement below quay level. Stone cornices and blocking course. Triple span, hipped slate roof. Top storeys have semi-circular windows. Stone string courses. The lower link buildings have walls curving inwards and stone capped buttresses. No. 2 Warehouse was built between 1800 and 1802 and is the earliest multi-storey warehouse to remain intact in the Port of London; the contractors were Messrs Adams & Robertson. The cast-iron stanchions supporting the timber floors date from 1813-18 and are the earliest remaining in a London multi-storey warehouse. They were installed to increase load capacity, replacing oak storey-posts. No. 2 Warehouse was converted 1998-2000 as a mixture of apartments, restaurants and shops by FSP Architects for the developers Manhattan Loft. No. 1 Warehouse was built between 1802 and 1804; the contractors were Fentiman, Loat & Fentiman. Originally a 'low warehouse' it was raised in height in 1827. Interior badly damaged by fire in 1901; the warehouse was restored almost as original immediately afterwards. No. 1 Warehouse was converted to become the Museum in Docklands, which opened in 2003. The architects were Purcell Miller Tritton and Partners.

Dock Office: built against the buttressed boundary wall of the Import Dock, these were constructed in 1803-4 and remodelled as a ledger office in 1827 by Rennie. Stock brick, main southern elevation of two storeys with tetrastyle Doric portico complete with triglyph frieze and mutule cornice. Western elevation with curved walls, stone coped parapet and supporting buttresses, one of which carries a chimney. Door approached by steps with wrought iron handrails. Architrave surround, double panelled doors and flat bracketed hood above. To north, two round, and three round-arched, windows; to south two later windows.

HISTORY: The West India Import Dock, of which Nos 1 and 2 Warehouses, and the Dock Office form part, was opened in 1802 by the West India Dock Company, the first dock in London designed and built for trading. It was built to meet the needs of the West India trade, which in 1797 accounted for nearly a third of London's imports, and nearly a fifth of its exports. Dissatisfaction with existing facilities at the Legal Quays, situated between London Bridge and the Tower of London, led to two rival schemes being proposed; one at Wapping, and the successful scheme at the Isle of Dogs. The West India Docks were to be for the exclusive use of the West India trade, and the Docks were to have a twenty-one-year monopoly of that trade. The chief promoters of the scheme were Robert Milligan and George Hibbert, both men with substantial West Indian interests.

The first warehouses to be built, which included No. 2 Warehouse, were pressed into service when the Import Dock opened in 1802. The other warehouses of the North Quay were completed by 1804. Writing in 1955, S. H. Kessels observed that at twice the length of the Palace of Versailles, the development outreached 'all the palaces and great houses of Europe', whilst the buildings are described by the Survey of London as 'one of the great monuments of European Commercial Power'. Rum warehouses opened on the south side of the Import Dock in 1806, and the Export Dock opened in the same year.

The trade which the West India Docks were built to facilitate is often described as 'triangular'. Ships left England loaded with goods which would be used to buy slaves on the west coast of Africa; those slaves would then be carried to plantations of the West Indies; and the ships would return to England with the products of those plantations. Goods were stored at the West India Docks to store at either end of this operation. Cargoes carried for trading in Africa included cloth, beads, guns, and even rum produced on the plantations. The principal imports were sugar, rum, coffee, pimento, mahogany and dye wood; cocoa, ginger, Madeira wine (the only non-West Indian cargo) and cotton were also handled. The warehouses on the North Quay would have been used for storing all imports, until the opening of the Rum Warehouses, after which rum and Madeira wine were carried there. Before the opening of the Export Dock the North Quay warehouses would also have been used for export goods; following the 1807 Act abolishing the slave trade, these were destined for the use of plantation owners, residents and slaves, and included clothing, building materials, household goods, victuals and wine.

In 1827 the 21-year trading monopoly of the East India Dock Company expired, and the low warehouses of the North Quay were raised to receive East India private trade goods, sugar produced by slaves in Mauritius, and tea. After the abolition of British colonial slavery in 1833, the West India Docks - together with other London docks - continued to receive coffee from Cuba and Brazil, where slavery was to continue until 1886 and 1888 respectively. The West India Docks remained in use until 1980.

The surviving buildings of the West India Import Dock occupy a unique place in the history of the British slave trade. Intended for the exclusive use of the West India trade, as endorsed by the West India Dock Act of 1799, the warehouses were built expressly to receive the products of slavery, and are the only surviving buildings of their kind in Britain to be linked to the slave trade in this direct and unambiguous way. In November 2007 the Museum in Docklands, housed in No.1 Warehouse, opened a permanent gallery entitled London, Sugar & Slavery, which examines the history and legacy of the capital's involvement in transatlantic slavery.

Warehouses Nos I and 2 and the Dock Offices now form part of the West India Dock Conservation Area. Also falling within this area are the 'Round House', built as a guard house by George Gwilt (1804-5); the former Excise Office building by Thomas Morris (1807-9), with its railings and gatepiers; John Rennie's Quadrangle Stores of 1825; five West India Dock Company Police houses in nearby Garford Street (by John Rennie, 1819); the sailmakers' and chandlers' warehouse at no. 11 West India Dock Road; and two of the original three stone piers of the entrance gates to the West India Docks. All of these are listed, as are the quay walls, copings and buttresses to the Import Dock and Export Dock.

A stone dedication plaque, originally placed on No. 5 Warehouse, has been re-sited on the western flank wall of the Dock Office building. The plaque describes the building of the West India Docks as part of 'an undertaking which under the favour of God, shall contribute Stablity, Increase, and Ornament to British Commerce.' A bronze statue of Robert Milligan (c1746-1809, statue 1812), original promoter of the Docks, stands on the North Quay outside the entrance to No. 1 Warehouse, the Museum in Docklands.

SOURCES: Survey of London vol XLIII Poplar, Blackwall and the Isle of Dogs (1994); Chris Ellmers, Warehouse No. 1 and the West India Docks, London: Historical and Cultural Significance (Report produced for Museum in Docklands, 2007); B. Cherry, C. O'Brien and N. Pevsner, The Buildings of England, London 5: East (2005); http://www.museumindocklands.org.uk/ accessed on 24 October 2007

REASONS FOR DESIGNATION
The Warehouses and General Offices, North Quay, West India Dock Road, are designated at Grade I for the following principal reasons:
* Fine Georgian warehouses and offices; No. 2 Warehouse is the earliest remaining multi-storey warehouse in the Port of London.
* Group Value with a number of other structures built as part of the exceptionally important West India Import Dock
* Strong connection with the British slave trade adds to historical interest of buildings, the warehouses having been built for the express purpose of receiving goods produced by slaves on West Indian plantations. This amendment is written in 2007, the bicentenary year of the 1807 Abolition Act.