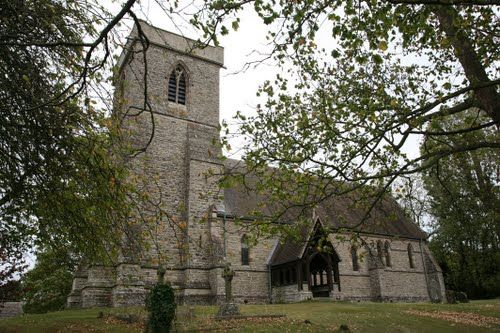 EXTERIOR: In the Decorated style of the early C14. The 2-stage west tower has a south-east turret and angle buttresses and freestone parapet; this replaces the original broach spire. There is a small clock face and 3-light west window in the tall lower stage. In the upper stage are 2-light openings with Y-tracery. The steeply gabled south porch is on a dwarf wall and has barge boards with pierced quatrefoils. Inside it the south doorway has a continuous filleted roll mould. The nave has 3 simple pointed windows in north and south walls, and a 2-light Decorated window at the east end of the north side. The chancel has angle buttresses. Its cusped windows are linked by continuous sill and impost bands, the latter carried over the windows as hood moulds. There are single-light north, single-light and 2-light south windows. The 3-light east window is identical with the west window. The vestry has a half-hipped roof and 3-light straight-headed window.

INTERIOR: Interior walls are brick-faced with modest polychrome bands and friezes. The keeled, boarded ceiling is divided into panels by moulded ribs with foliage bosses. The break between nave and chancel is marked by a cusped arched brace on tall corbelled shafts, of which the braces were carved by Martyn & Emms.

PRINCIPAL FIXTURES: The Norman font is similar to the font at Wyre Piddle, with arrowhead moulding around the rim and chevrons lower down. Benches have square moulded ends. A mid C19 reredos has been re-erected at the west end. It consists of 3 panels, of which the central has painted Victorian Royal Arms, with painted texts below and in the side panels. There are memorial tablets, with draped urns, to Samuel Lesingham (d 1827) by Lewis of Cheltenham, and Lucy Sheldon (d 1839) by Preece of Worcester.

HISTORY: Built in 1882 by W.J. Hopkins (1820-1901), architect of Worcester, for William Laslett of Abberton Hall. A C12 font, C19 reredos and memorial tablets and ledgers were salvaged from a previous church. In 1962 the original broach spire was removed (it stood in the flight path of RAF Pershore) and replaced by the present parapet.

REASONS FOR DESIGNATION:
The church of St Edburga, Abberton, is listed Grade II for the following principal reasons:
* It is a well-proportioned Gothic-revival church, although old-fashioned for date.
* It has a C12 font of special interest.