A Grade I Listed Building in Widecombe in the Moor, Devon 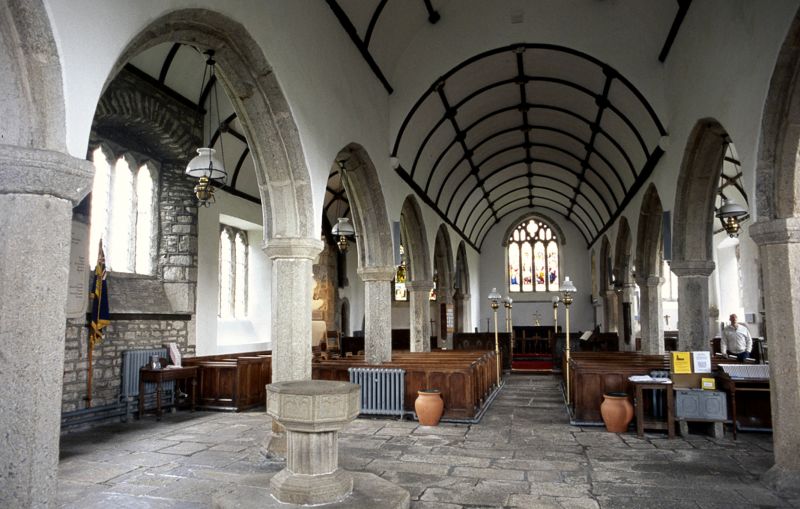 Civil Parish: Widecombe in the Moor

Find accommodation in
Widecombe in the Moor

Parish Church. C15 "restored in 1874 and subsequent years". Tower and nave roof
repaired after being struck by lightning in 1638. Tower, south and east sides of
body of church of granite ashlar, remainder of granite rubble. Slated roofs. Nave,
north and south aisles, north and south transepts, chancel, north and south chancel
chapels, south porch, west tower; vestry, of some antiquity, on north side of north
chancel chapel. Windows are Perpendicular and contain a considerable amount of
unrestored work; detail is mostly in granite, apart from some heavily restored
limestone at the east end. Arches are pointed, except for the north and south sides
of the nave and south side of south chancel chapel which have 3 cinquefoiled lights
under a flat arch. Tudor priest's door on south side of chancel. Blocked doorway
with pointed arch in west wall of north aisle. South porch is single-storeyed;
moulded inner and outer doorways with pointed arches, wagon-roof. Tower, plainly a
later addition, is very fine and a famous local landmark. 3 stages; clasping
buttresses with offsets, each of which carries a pinnacle. Crenellated parapet with
large octagonal pinnacle at each corner. Heavily moulded west door. Unusually
elaborate belfry openings of 3 lights.
Interior: nave and chancel have a continuous arcade of 6 arches each side;
octagonal columns with double-chamfered arches. Moulded tower arch with attached
shafts. Transepts have moulded 4-centred arches of wood. Simple piscinas in south
transept and chancel chapel, south wall of chancel. Stone rood stair in north
chancel chapel. Wagon roofs throughout. Lower part of medieval wood screen, with
painted figures, across nave and aisles. Some C17 granite tomb-slabs.
Sources: R Dymond, ed., Widecombe, 1876, pp.89-98. Kelly's Directory of
Devonshire, 1906, p.804.