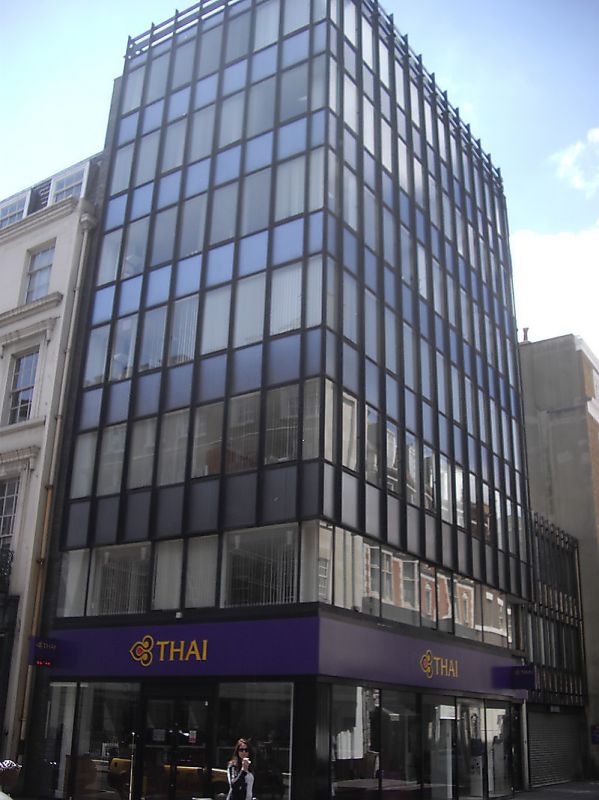 MATERIALS AND STRUCTURE
Cantilevered concrete frame, rough textured where it is exposed at the rear of the building. Glazed curtain wall of black aluminium framed window units juxtaposed with silver grey spandrel panels. Flush, stretcher bond, grey stock brick to rear wall and to narrow side panels of main elevations. The building is elegant, precise and measured, reflecting Moro’s strong sense of geometry.

PLAN
Corner site of Albemarle Street and Stafford Street. Moro's brief was to build the maximum permitted accommodation on the site, including a small basement car park.

Flat-roofed, seven-storey block of offices above a former showroom that originally occupied the lower floors from basement to fifth floors. Glazed semi-circular stair well to the rear, above a three-storey rear block of offices over a garage at street level. In the basement, earlier parallel vaulted cellars project below the street.

EXTERIOR
Albemarle Street elevation in seven and a half glazed bays with a narrow half bay clad in stretcher bond brick to the left. Stafford Street elevation in 12 and a half bays, recessed at first floor above the side entrance. Upper floors are defined by a projecting, slender glazing grid in dark grey/black aluminium of fixed lights and pivot casements, above silver-grey spandrel panels. The outer angles at first floor, which was the upper floor of the main showroom and more lightly glazed, have chamfered glazed joints. Renewed plate glass shop front, set either side of a rectangular corner pier, originally in exposed concrete and now clad in vertical aluminium panels. The entrance has been moved, its original position marked by a flush, polished granite threshold. Deep, Thai Airways fascia (not of special interest) covers or replaces the original concrete upstand which was lit.

STAIRWELL
Semicircular, projecting glazed stairwell at rear, the glazing in similarly scaled, single-glazed units to the curtain wall. Stair in untreated grey concrete with a lighter coloured concrete lip above a deep incised band. Seen from the outside, the rounded profile of the stair gives the appearance of being suspended in the stairwell like a lift in a lift shaft, or a washer in a tube. The stair has a steel balustrade and deep timber fascia panels and slender handrails. It continues in simplified form, internally, to the basement.

Rear block in three storeys in horizontal shutter-marked concrete behind a screen of vertical fins to the first and second floors which have continuous, aluminium framed horizontal strip windows of fixed lights and casements.

INTERIOR
Inside the building, greatest interest resides in the stairwell, which is the only unaltered area of the interior, and in particular in the upper glazed section, where Moro's precise detail and colour scheme are clearly legible.

Elsewhere, rectangular structural piers, set back from the curtain wall, and originally in exposed concrete have been rendered and painted.

The spiral stair from the basement to the second floor showroom and Robin Day's interiors were removed in 1987/8 when Thai Airways acquired the building, and before it was listed in 1995.

41 Albemarle Street was built in 1961-3 by Peter Moro, assisted by Michael Mellish, as a showroom and offices for the furniture company Hille. Within the main building the offices were confined to the top two floors, the rest of the building, including the basement, were designed as showrooms. The roof garden was intended to display garden furniture.

The Hille company was set up in the East End of London in 1906 by Salomon Hille, a Russian emigrant, to renovate C18 furniture. By the 1930s it had acquired an international reputation for its skilled craftsmanship. After the Second World War, Hille became synonymous with modern design, establishing close relationships with leading modernist architects and designers. Hille moved out of London to Hainualt after the war, and in 1961 employed the acclaimed modernist architect Ernö Goldfinger to design new offices in Watford. While Peter Moro was chosen as architect for their prestigious new building in Albemarle Street, the showroom interiors were designed by Robin Day (1915-2010), who became one of Hille’s leading designers, responsible, for example, for the Hille stack chair in the early 1950s and the highly successful low cost, polypropylene stacking chair (1963) as well as their graphics, showroom designs and exhibition stands.

Peter Moro (1911-99) was an internationally renowned modernist architect of the post-war era. He emigrated to Britain in 1936 to avoid Nazi persecution, and went on to have an acclaimed if never extensive practice in England, later specialising in theatre design. He worked with Lubetkin and Tecton, and was architect for the interiors of the Royal Festival Hall. London (listed Grade I) before setting up in private practice. His limited output has a clarity and stylishness that sets it apart from its contemporaries: it carries forward the modernist principles established by Lubetkin in England during the 1930s, while always being of its time.

Aside from 41 Albemarle Street, the precise elegance and sense of geometry that pervades Moro's work is also captured in Harbour Meadow, 1938-40, (listed Grade II) by Moro and Richard Llewelyn Davies with Gordon Cullen, for Mr and Mrs Tawse; his own house at Blackheath Park,1957-8, (listed Grade II*); Nottingham Playhouse, 1961-3, (listed Grade II*) and Fairlawn School,1955-57, (listed Grade II) designed by Peter Moro and Michael Mellish, one of only three schools produced by Moro.

41 Albemarle Street, showroom and office building for Hille, 1961-3 by Peter Moro is listed at Grade II for the following principal reasons:

*Architectural interest: built as a showroom and offices on a corner site, the building is elegant, precise and measured, reflecting Moro’s strong sense of geometry;

*Materials: carefully juxtaposed palette of colours and contrasting use of rough, fair-faced concrete to the frame and smooth finishes to the curtain glazing;

*Intactness: aside from the ground floor showroom window and entrance which have been modified slightly, the important exterior elevations and rear stairwell are unaltered;
*Architect: Peter Moro was an internationally renowned modernist architect of the post-war era, influenced by Lubetkin, his work having a clarity and stylishness that sets it apart from its contemporaries;