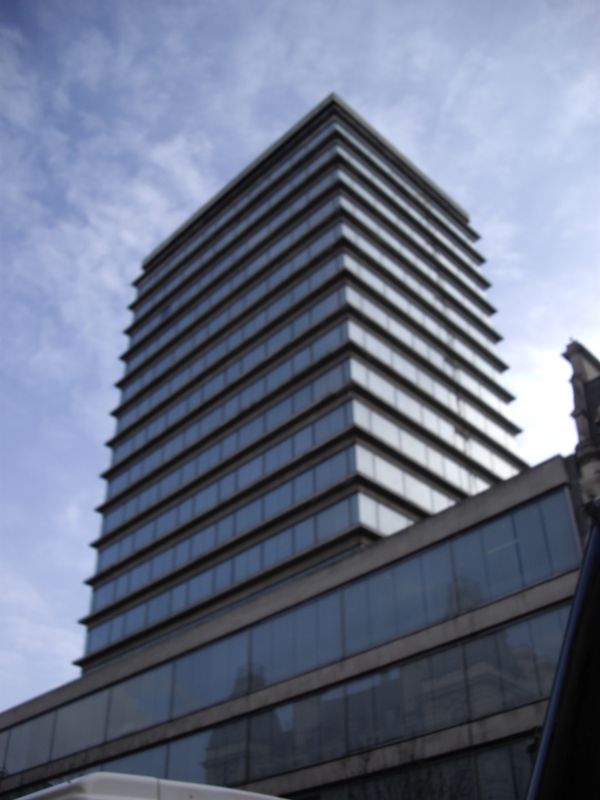 TOWER is characterised by continuous strip windows to each floor with projecting Portland stone bands, which define the silhouette of the building. Tower is finished at the top with a heavy horizontal band, which is slightly set back and appears to hover above the further set back windows with tall steel mullions at this top storey. This overhang is supported on steel circular columns and there is a perimeter viewing balcony with steel balustrade. Behind this, the further-set-back top of the tower is clad in grey marble, which externally has been much weathered, capped in a strip of vents and with attached steel circular flagpole.

PODIUM is raised on circular stainless steel pilotis which reappear as short columns on the 4th floor of the podium, where the floor is recessed to Pall Mall, creating a roof terrace. Here, the stone-edged canopy is flush with the face of the building below and along Haymarket.

Entrance to Haymarket with cantilevered canopy and NEW ZEALAND HOUSE in blocky lettering on the fascia. This is flanked by engraved glass figurative panels by John Hutton. Entrance to Royal Opera Arcade is setback from the arcade and predominantly glass with steel doors and fascia with NEW ZEALAND HOUSE in blocky font. On the exterior of the Haymarket side of New Zealand House is a ceramic blue plaque erected by the British Vietnam Association to Ho Chi Minh, the Vietnamese leader. The plaque commemorates that Minh worked as a waiter in the former Carlton Hotel in 1913. The Carlton occupied the site prior to New Zealand House.

INTERIOR
The internal arrangements of the podium are complex with inter-penetrating internal spaces of varying heights and mezzanines and linking bridges. Internal planning is based on a modular grid, which was intended to be subdivided internally with a system of demountable aluminium partitioning panelled with New Zealand hardwood. As a general rule, where original timber (primarily vertical slatted panelling) and marble floor and wall finishes survive, these are of special interest; original utilitarian and later finishes are not of special interest.

In the PODIUM, the main Haymarket entrance leads to a small vestibule with late C20 sliding doors and a shallow ramp all under a low ceiling of large timber beams in a traditional style. This opens into the double-height lobby featuring a timber-slatted ceiling and Greek white Pentellic marble floor paving, two exposed structural steel columns, the timber sculpted pole (see below) and the late C20 replaced reception desk. At its centre is the lift core, which rises through the podium and the full height of the tower above. It is lined in grey Marathon marble and is visibly expressed in both the lobby and from the series of central voids which allow for engaging views through the four storeys of the podium. The grey marble wall features inscribed panels announcing that stones were laid by the Prime Minister of New Zealand on 16th May 1960 and the building was opened by Queen Elizabeth II on 9th May 1963, carved by David Dewey. A staircase from here to the mezzanine leads has C20 glazed partitions inserted at the top. In the lobby stands a striking three-storey wooden sculptured pole, which can be appreciated from each level it passes through, and was always intended, but added later. Meticulously carved in the basement of the building, from a single New Zealand totara tree, by the operatic bass and sculptor, Inia te Wiata MBE (1915-71), it bears life-sized representations of the tribal figures of the Maoris. It sits on a marble plinth and is a substantial artistic fixture of special interest.

Beyond the lift is the grand main staircase, faced with grey marble and a glazed balustrade, leading to the mezzanine gallery. The mezzanine features rimu timber slatted panelling and grey marble walls and exposed structural steel columns. The ground floor reception hall was not available for inspection but noted to be lined with timber originally. The lower ground floor features a large ladies’ bathroom with extensive use of grey marble wall cladding and a timber-clad vestibule. The basement has storage and car parking, with a deep sub-basement housing plant and none of this is of special interest, except for the surviving vaults used as wine cellars in the Carlton Hotel (Mewes and Davis, 1899), which was formerly on the site (these were not inspected). The podium features an internal open-air courtyard at 2nd floor level, which is paved in brick and Portland stone and contains planters. There is an original external staircase and a later spiral stair to this courtyard from the 3rd floor and it is enclosed by the typical glazed walls and the blind brick wall of the adjacent theatre. At upper levels of the podium, there are internal bridges with glazed and hardwood balustrades as well as some steel doorways with original lettering.

Throughout the TOWER, the only interiors of interest are the central lift lobbies, which are mostly carpeted and of concrete construction, with the exception of floor 17, which has a floor of reconstituted marble installed in 1993. The offices on each floor have been much altered for different tenants and possess no features of special interest. The exception is the penthouse or floor 17, which has fully-glazed walls to the viewing platform with magnificent 360’ views over central London. Here the original lounge with bar and gallery is largely lined in grey marble and vertical slatted wood panelling; the carpet has been replaced in replica of the original. There are two modest staircases with metal balustrades. The use of air conditioning, which was an innovative technology at the time, allowed for distinctively large windows, which did not need opening. Venetian blinds were planned from the beginning to deal with solar gain and glare and are variously praised for the dynamic qualities or criticised for interrupting with the otherwise pure nature of the highly-glazed tower.

Professor Sir Robert Matthew (1906-75), CBE, PPRIBA, FRTPI, FRIAS, ARSA trained at the Edinburgh School of Art. He served for seven years as architect to the London County Council, where he was responsible for the Royal Festival Hall, and brought in a number of architects who went on to lead the next generation. Matthew then held the chair of architecture at Edinburgh and from 1956 he was a lead partner in the major post-war architectural partnership of Robert Matthew, Johnson-Marshall and Partners.

New Zealand House was built as the new headquarters for the New Zealand High Commission, formerly on the Strand, on a site leased from the Crown Estate Commissioners where Mewes and Davis’ Carlton Hotel formerly stood. It was a sensitive site at the bottom of Haymarket, close to Trafalgar Square, St. James’ Park and the Mall, and the design’s genesis was thus controversial. It also abutted Her Majesty’s Theatre (which was originally intended to be demolished but kept, and listed Grade II* in 1970) and Nash’s Grade I Royal Opera Arcade, which was always to adjoin, and communicate internally, with the new building. The London County Council (LCC) had not planned for tall building so close to these major landmarks but the scheme had immunity from normal controls since the land was Crown Estate and because of its diplomatic nature. Nevertheless there was a long debate with the LCC and the Royal Fine Arts Commission about the design, which evolved between 1956 and 1959, and the resultant building had a higher podium (dictated by the cornice height of the surrounding buildings) and a more complex roof profile than was originally intended. It was opened by Queen Elizabeth II on 9th May 1963. That year the Architects' Journal commented that: 'Every so often a building is complete which can serve as a yardstick by which we can measure our architectural standards and conceptions. Such a building is New Zealand House. It is partly an office block, home for visiting New Zealanders and partly a symbol of Commonwealth pride. It may not be fair therefore to compare it with most commercial offices...because of the high quality of the design.'

New Zealand House, of 1959-63 by Robert Matthew and Johnson-Marshall, is listed at Grade II for the following principal reasons:
* Architectural quality: an elegant tower and podium composition characterised by plate glass strip windows and pronounced Portland stone bands, designed by one of the most significant post-war architectural practices.
* Interior quality: the public spaces make apposite use of native New Zealand timbers for finishes, as well as Greek white Pentellic and grey Marathon marbles.
* Historic interest: a proud diplomatic headquarters for a Commonwealth country and illustrative of a period of post-war embassy-building excellence in the capital (Saarinen’s US Embassy of the same time is also Grade II); it has significance as the first major office tower in central London, the first to be fully air conditioned and the first to be fully glazed on all sides.
* Relationship to context: the building confidently commands a sensitive corner site close to the Mall, St. James’ Park and Trafalgar Square, in a resolutely modern style but with contextual sympathy e.g. the podium height responds to surrounding cornices and it incorporates an entrance to Nash’s adjacent regency arcade.
* Critical reception: the building was much admired when built (and praised by Ian Nairn in his 1964 ‘Modern Buildings in London’) influencing a broader acceptance of modernist and tall buildings through its careful handling and detailing.
* Group value: attached to the north is the Grade II* Her Majesty’s Theatre (which was nearly demolished to accommodate New Zealand House) and to the west is the Grade I Royal Opera Arcade, an entrance to which was accommodated into the new building.