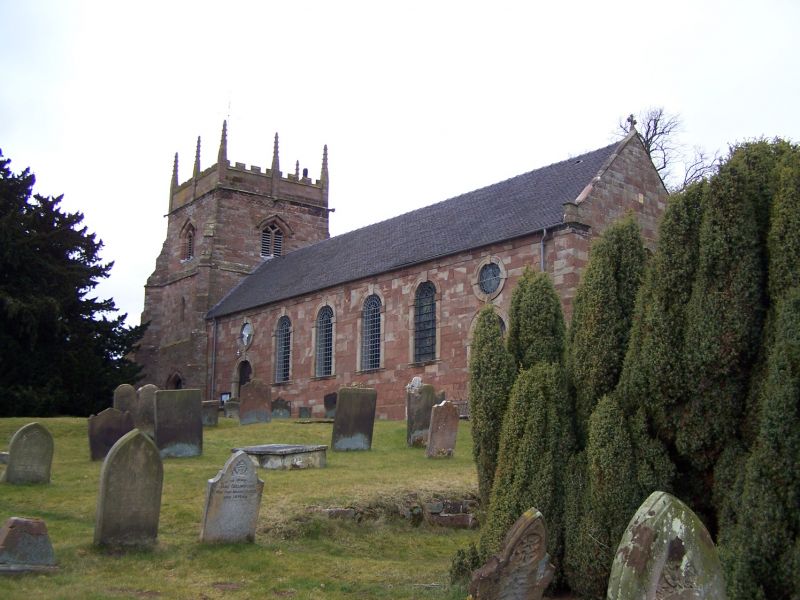 II*
Church built of dressed sandstone. An unusual mixture of dates being of possible C12 origins with a C18 remodelling to south wall and interior.

EXTERIOR: West tower with early C13 base, angled buttresses and late medieval upper part with a decorated frieze and eight pinnacles. The chancel is of early C13 date, possibly earlier, with a small window to the north. The east window is a Victorian replacement in Perpendicular style. The east window of the aisle is of C15 date with quatrefoil detail. The north wall (aisle) is of C14 with Decorated style windows. The south wall of the nave was rebuilt in 1723 and consists of 1:4:1 bays; four tall keyed round-arched windows flanked by round arched doors surmounted by keyed oculi.
INTERIOR: To the north of the nave is an arcade of 1723 comprising six Tuscan columns on high plinths with round arches. The nave and chancel have a continuous flat plaster ceiling with moulded cornice.
The northern aisle has a C19 close boarded roof with arched braces and pendants. The organ and alabaster monument (see below) are situated at the east end of the aisle.
Much old clear glass survives.
FITTINGS: Stylish C18 marble baluster font with waterleaf decoration presumably contemporary with the early C18 remodelling of the church. There is also a plain wooden C18 pulpit. Good modern screens of Classical Character.
MONUMENTS: C17 Alabaster table tomb with effigies to Sir Thomas Skrymsher (1633) and his wife Anne (1656) by Garrat Hollemans. The two effigies lie beneath a flat canopy on four columns; the couple's children are represented along the side of the chest.

HISTORY: Garrat Hollemans was on of a number of alabasterers working out of Burton upon Trent in the C17. The Skrymshers built the original Aqualate Hall (to the south east of Forton) in the early C17.

Summary of Importance: When assessing churches for listing, high quality work of any period after the Reformation combined with medieval work would normally result in a high grade, but the survival of C16 - C18 work, partly because of the age and partly because of the paucity of church building in this period, is even more likely to result in a high grade. All Saints Church not only possesses substantial early medieval fabric with its C13 chancel and tower but also was remodelled in 1723. The high quality of this C18 work, externally to the southern wall and internally with the restrained plastered ceiling and fine Tuscan arcading greatly contribute to the church's overall significance. It certainly merits listing at Grade II*.