A Grade II Listed Building in East Cliff and Springbourne, 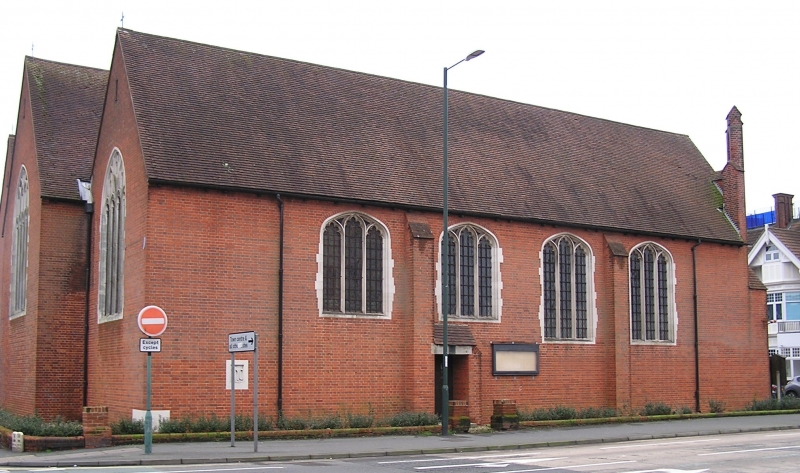 Anglican church. 1926-34; by Sir Charles Nicholson. Red brick in English bond with stone window dressings. Clay plain tile roofs with brick tumbling in the gable ends. PLAN: Aligned NE-SW. Nave and chancel in one and full-length 5-bay north and south aisles; no tower, but bellcote on liturgical NW corner and porches and offices in low ranges on the 'west' end and 'south' side. The church was designed to be built in stages, to replace an existing mission church. Restrained Perpendicular style. EXTERIOR: The nave and aisles are in three almost equal parallel ranges, the nave slightly taller and the ranges staggered at the' east' end, the nave advanced slightly and the north aisle recessed more than the south aisle. The' east' end has large 4 and 6-1ight Perpendicular windows and a single-storey range in front with moulded pointed arch doorways to left and right, straight-headed lancets and flat brick buttresses between. On the 'NW' corner a brick bellcote set at an angle to and integral with the corner, with a broach at the base and a saddle-back top. The 'north' and 'south' sides have 4-centred arch 3-light Perpendicular windows, the two to the 'east' with raised cills, tall brick buttresses, on the 'north' side the 'priest's' doorway with shallow porch against a buttress. The staggered 'east' end has similar windows to that of the 'west' end, but the 'south' aisle gable is blind. South side has slim chimney stack with little buttresses and a stone cap. The 'west' end has lead rainwater heads to small brick arches in the valleys between the gables. INTERIOR: Whitewashed walls. Tall 5-bay arcades with octagonal piers and chamfered 2-centred arches, the end piers without capitals and the arches dying into them. Boarded timber roof with painted decoration on the soffits of the moulded tie-beams and with king-posts with braces. Similar painted decoration to timber reredos, pulpit and font-cover. Low panelled screen and 'north', chapel screen with carved open-work. Furnishings designed by Nicholson. Stained glass, some by N. Comper including the 'east' window [1931], the 'east' and 'north' windows of the 'north' chapel [1949]. SOURCES: Buildings of England [Hampshire], page 124.