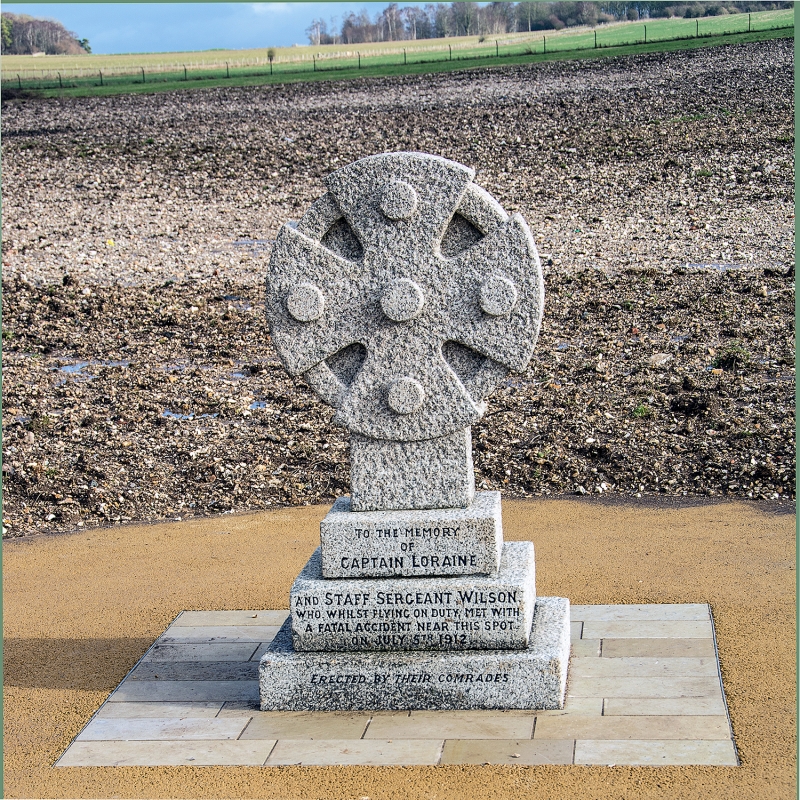 A memorial erected in commemoration of two pioneer airmen who were killed in a flying accident near Stonehenge in 1912.

A memorial erected in commemoration of two pioneer airmen who were killed in a flying accident near Stonehenge in 1912.

Description: a relief-carved cross set into a wheel-head with a short shaft and stepped plinth, inscribed with the words:

TO THE MEMORY/ OF/ CAPTAIN LORAINE/ AND STAFF-SERGEANT WILSON/ WHO WHILST FLYING ON DUTY MET WITH/ A FATAL ACCIDENT NEAR THIS SPOT/ ON JULY 5TH 1912./ ERECTED BY THEIR COMRADES

The Airmen's Cross near Stonehenge was erected in memory of two pioneer airmen, Captain Eustace Loraine and Staff Sergeant Richard Wilson, who were killed in a flying accident near Stonehenge in 1912. In 1911, shortly before the creation of the Royal Flying Corps (active from 1912 to 1918), military flying had begun in the area around Stonehenge, as the open grassland was particularly suitable for flying early aircraft. Loraine and Wilson were flying a Nieuport monoplane from Larkhill Airfield, north of Stonehenge, on a routine training flight on 5th July 1912, when, unaccountably, the aircraft crashed.

On 25 June 2012 the memorial was removed from its original location along the A303, and re-erected near the new Stonehenge visitors' centre in 2013. On 1 May 2014, the Airmen's Cross was re-dedicated by the Earl and Countess of Wessex.

The Airmen's Cross near Stonehenge is listed at Grade II for the following principal reason:

Historic interest: a relatively rare memorial erected in 1912 to commemorate the historically significant event of a flying accident that killed two pioneer aviators shortly before the formation of Britain's first military flying corps.