Terrace of Flats, and Former Laundry Block to the Rear 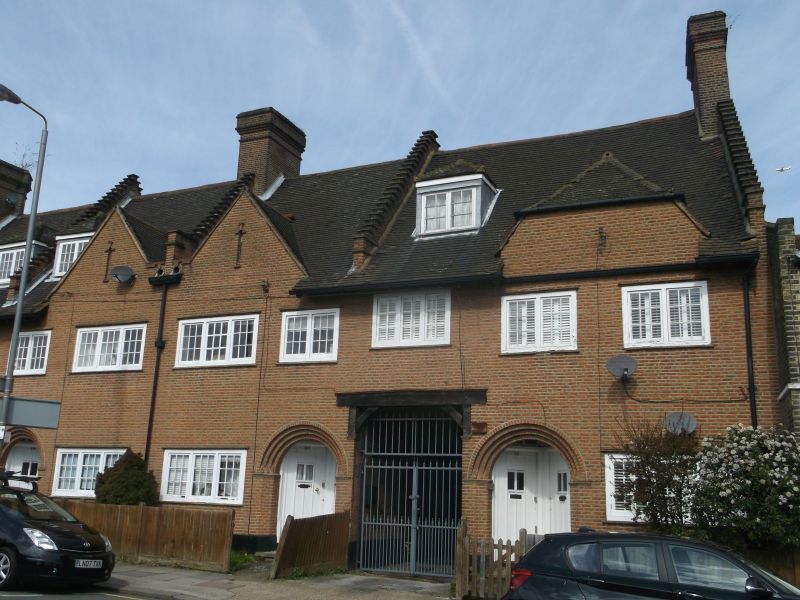 Entry Name: Terrace of Flats, and Former Laundry Block to the Rear

Church of England Parish: Wandsworth St Michael and All Angels with St Stephen

II
Flats, designed as a row of four cottages, and laundry, 1906 by William Hunt; the design is likely to have been the work of his son and partner Edward A Hunt (1877-1963). Minor later alterations, including the subdivision of one of the flats into two.

EXTERIOR: Arts and Crafts-style building of two storeys plus an attic, constructed of red brick with a large pitched tiled roof, and broad brick chimney stacks with brick mouldings. Each cottage has its own front door, these set in pairs at right angles to each other within wide Romanesque-arched brick doorways. The latter have chamfered jambs and imposts of tiles laid flat. The timber doors (the originals) have vertical panels, two small apertures in the upper portion, and fanlights with diamond leaded panes. The windows are nine-pane timber casements painted white and arranged in twos and threes. In the attic are dormer windows under small hipped roofs. To the two central gables there are arrow-loops with tiny tiled keystones. The same round arches with keystones frame the two rainwater pipes where they run from the gutter to an iron hopper. Each gable end is crow-stepped and topped with tiles laid flat, as are the party walls between each pair of cottages, which rise above the pitch of the roof. The carriage arch has a timber lintel with timber posts and braces, resting on tiled imposts and an iron gate.

INTERIOR: the interior of one flat was inspected. An original fireplace (with green tiled reveals), built-in cupboards, doors and architraves, and a staircase with timber handrail and turned balusters were observed.

LAUNDRY: the carriage arch leads to a rear yard and a detached two-storey laundry building with brick walls (rendered white on its south face), timber casement windows (in rows to the south and in a mullion-and-transom arrangement to the north), a pitched roof with splayed eaves, and a brick chimney stack. Inside, the exposed roof structure has curved timber braces with metal tie-beams; the windows have timber lintels; and there is a surviving original vertical-panelled door.

HISTORY: William and Edward Hunt's architectural practice was principally in town houses and commercial premises in London's West End, including No. 44 Old Bond Street of 1906 and No. 93 Mortimer Street of 1910 (qv). After the First World War, the practice built Brettenham House on the north-western approach to Waterloo Bridge and Wandsworth Town Hall (qv). William Hunt was mayor of Wandsworth in 1902-3, which perhaps recommended his practice to the councillors commissioning the town hall in the mid-1930s, and may also explain the firm's designing of these cottages on the fringes of Wandsworth Town. They were commissioned by a James L Purdy and would have originally housed working families.

The row originally comprised four cottages facing Oakhill Road, each with a two-bedroom flats on the ground floor, and a three-bedroom flat above) and a two-storey detached laundry building in the yard to the rear, accessed via the carriage arch between Nos. 163/165 and 169/171. No. 157 has since been subdivided into two flats, but overall the original plan survives. Each flat had roughly the same arrangement of rooms: a sitting room at the front, a bedroom behind, and a kitchen, scullery, WC and additional bedroom in the range to the rear.

The laundry building to the rear of the cottages was a commercial premises rather than for the domestic use of the tenants. The post office street directory for 1908 lists No. 155 Oakhill Road as 'Mrs Sophia Corke, laundry'. On the original plans, the downstairs rooms are allocated for sorting and packing, for washing, and as the manager's office; presumably the upstairs was for drying, pressing and folding. In the C19 and early C20, Wandsworth was the home of many commercial laundries, which served the homes and hotels of the growing metropolis.

REASONS FOR DESIGNATION:
Nos. 155-171 Oakhill Road, including the former laundry building to the rear, is designated at Grade II for the following principal reasons:
* Architectural quality: a sophisticated design which shows the influence of the emerging LCC cottage estates and of the experiments at Letchworth Garden City in the Edwardian period
* Authorship: by Edward A Hunt, who went on to design Wandsworth's town hall in the 1930s, and whose father was also a prominent local architect and politician
* Historic interest: built in the tradition of 'model housing' and evidencing progressive ideas in the inclusion of a commercial laundry to the rear of the cottages