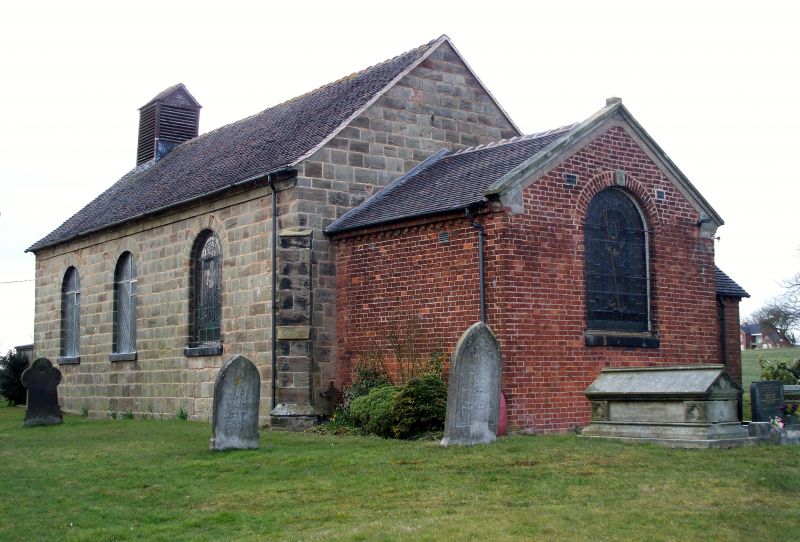 MATERIALS: Ashlar local grey sandstone, chancel of hand-moulded brick, tile roofs. Some of the masonry has been re-used.

EXTERIOR: The nave has 3 large round-headed south windows, and blank north side with a single buttress. The brick porch has diagonal buttresses and a 4-centred arch to a ribbed door. A simple gabled timber bellcote has louvres in each face. The chancel has a round-headed east window. On the north side the vestry has a 2-light small-pane casement window.

INTERIOR: The plain interior has flat plaster ceilings and plastered round-headed chancel arch. Walls are plastered. The floor is laid with tiles, with parquet floors below benches.

PRINCIPAL FIXTURES: The alabaster font and lectern form a pair, dated 1933. Other fixtures are also probably earlier C20, including plain benches, pulpit with open Gothic tracery, and communion rail with a frieze of quatrefoils. The east and one south window are by William Pearce of Birmingham of the early C20; the former depicts the Good Shepherd.

SUBSIDIARY FEATURES: A tub font with C19 tool marks survives in the churchyard.

HISTORY: The church was built in 1794 by William Dudley, possibly re-using older masonry for the nave. The brick porch and chancel have pecked surfaces, suggesting that they were intended to be rendered. A vestry was added in the late C19 or early C20. Fittings belong to the early C20.

REASONS FOR DESIGNATION:
The church of St Leonard, Marston, is listed Grade II for the following principal reasons:
* For the architectural interest of a well-preserved small, simple late C18 village church.