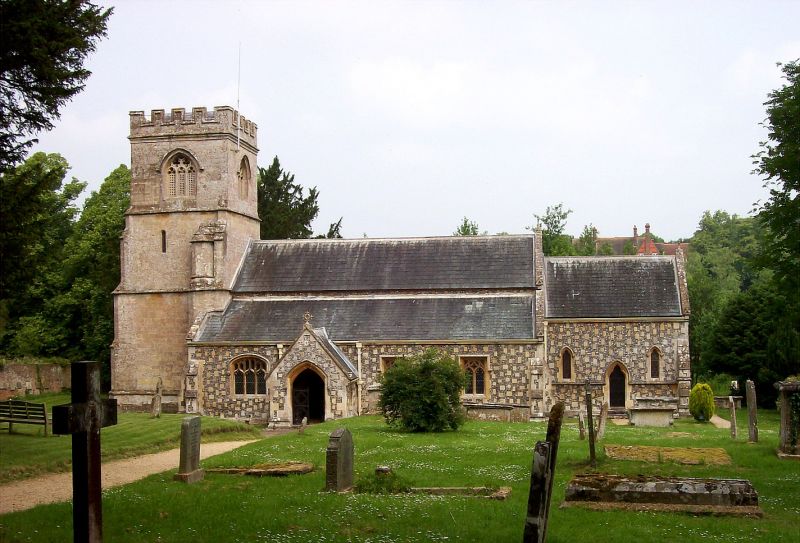 Materials: Yellow ashlar and coursed flint. The medieval interior of the tower, and the 19th century outer walls of the nave and chancel etc., are of flint with ashlar chequerwork, a traditional Wiltshire finish. Slate roofs.

Exterior: Short, squat 15th century tower, of three stages. Diagonal buttresses with setoffs, and a small polygonal stair turret on the south, rising to the second stage only. Bell-openings of three lights, with simple Perp tracery. The main lights have pierced stone panels known as Somerset tracery, rather than louvres. The battlements have a continuous moulding around the merlons, a typically 15th century form. Four-light west window. The west door is four-centred, with decorated spandrels under a square label. There are two medieval stone shields in the wall, one with an Agnus Dei, the other with initials (M.?) and a rose; also some 14th century corbel heads. The rest of the exterior is of 1854: low nave, lower, chancel, and a south aisle of the lean-to type. No clerestory. Broad south porch. The tracery is varied deliberately to give the impression of an evolved medieval church: 14th century reticulated east window, 13th century-style trefoil-headed lancet openings on the south side of the chancel, a free late Perp window under segmental head at the west end of the aisle, two square-headed lights of uncertain parentage east of the porch.

Interior: Embedded in the porch wall are one side of a square font bowl with blank arcading and a lozenge frieze, and a quatrefoil-shaped basin from a piscina. The inside walls of the church are ashlar lined. Original 12th century Norman are the circular piers of the four-bay nave arcade, with scalloped trumpet capitals and octagonal abaci. The eastern respond has a more elaborate capital, with a pretty running leaf design above the scallops, and beneath, a standing leaf (going towards stiff-leaf) at each interval of the scalloping. The arches of the arcade are by Wyatt. The Norman chancel arch was also replaced in 1854 by a moulded two-centred arch. The tower base serves as an organ loft. Open timber roof to the nave, with arch-braced tie-beams, and open traceried arches above.

Principal Fixtures: The font is a `truly amazing piece' (Pevsner), 12th century, of black Tournai marble. Round bowl with heavy mouldings, on a short circular foot. It was in the church by c1600, and is believed to have been brought from St. Nicholas's chapel in Marlborough Castle after 1417. Wrought-iron and brass altar rail, and flanking the altar, painted Commandment boards, mid 19th century in style. Rather routine pulpit, presumably by Wyatt; oak, panelled, with a standing figure of a saint at the corner. The chancel floor has richly patterned encaustic tiles. The stone flagged nave has plain Victorian pews with low doors. Also in the nave, several hatchments, one with naive memento mori symbols, possibly late 17th or 18th century, and a 17th century tablet with painted Gothic script commemorating bequests by John Colman, d. 1619. Stained Glass: Brightly coloured east window c1854, signed C.A.G.; perhaps a designer working for Powell & Sons, who provided the south aisle east window at about the same date. The north aisle first from east, Bleeck memorial, is by Bell & Son of Bristol, 1894. The third from east, Hussey memorial, is c1916, stylistically attributed to Percy Bacon Brothers. Monuments: At the east end of the south aisle is a brass to John Bailey d.1518, with his wife who wears a gabled Tudor headdress. 18-in. figures inset into a slab, with separate inscription and below, their ten children. There is a fancy Baroque oval tablet to Jeffery Daniell, d. 1681 and his son (d. 1697). Perched on the scrolls are two weeping putti `with enormous hankies' (Pevsner). Small memorial to Martha Bleeck, d. 1911; an opus-sectile and mosaic panel with angels holding a scroll. High on the south face of the tower is a sundial, possibly 18th century, with Roman numerals.

Subsidiary Features: The church sits in meadows away from the village, on the south bank of the River Kennett. The large churchyard has many good 18th century chest tombs and headstones.

History: Preshute lies c. 1 mile west of Marlborough. The name, meaning `priest's cell', is first recorded in 1186. The church had the dedication of St George by 1232, although it may be of Saxon foundation. The evolution of the parish of Preshute is complex, as it included land in the eastern part of Marlborough. That area was served by a chapel of ease, St Martin, Coldharbour Lane, built c1252-4. This is long demolished, but a decorative carved stone from St Martin was placed in the porch at St George in 1950. The part of the parish in which St George lies was absorbed into Marlborough in 1934.

Thomas Henry Wyatt (1807-1880) was a member of an architecturally prolific family. Born in Ireland, he was a pupil of Philip Hardwick, who had a large and important practice in both classical and Gothic architecture. Wyatt became district surveyor for Hackney in 1832 and from 1838 till 1851 developed a successful partnership with David Brandon. Wyatt was honorary architect to the Salisbury Diocesan Church Building Society, which brought him many commissions, including the building or rebuilding of at least 16 churches in Wiltshire, and restorations at some 30 more. His most famous church is Wilton, Wilts (1841-5). He was elected president of the Royal Institute of British Architects in 1870 and three years later was awarded its Royal Gold Medal.

Reasons for Designation: The church of St George, Marlborough, is designated at Grade II* for the following principal reasons:

* Good 15th century tower with some symbolic and decorative carvings.

* 17th and 18th century hatchments, monuments and charity board.