A Grade I Listed Building in Penshurst, Kent 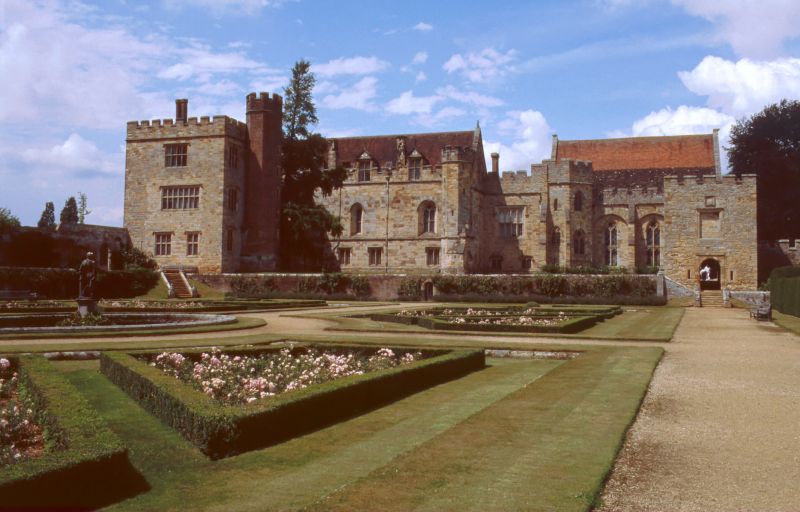 2.
Large, rambling building of various periods built largely of sandstone in differing
colours but with some brickwork and a little Kentish ragstone. Elevations mostly
battlemented, but some steeply-pitched tiled roofs visible.
The oldest part is hall house built by John de Pulteney, license to crenellate
1341. Very large hall with fine timber roof resting on figure corbels. Carved
screen of late C16. Solar end much altered with stone external curved stair
of mid C15. Undercroft below has piers running into arches without capitals.
Further license to crenellate of 1392 produced enclosing outer wall with square
side and angle towers. Only south central gate tower (qv) survives complete
and western stretch of wall. Mid C15 the Buckingham building, to west of old
house, much altered in 1850's. To south of this the Elizabethan wing with long
gallery on 1st floor. Rich plaster ceiling and Jacobean woodwork articulated
by fluted pilasters. Sensitively restored. This links with altered south-west
tower. Other Elizabethan ranges link altered north-west tower with north central
tower and the latter to the original house. Central tower (King's tower) remodelled
at this time. Considerable renewal of these parts aid building of long north-east
section in 1818 by J B Rebecca in Tudor-Gothic style.

Penshurst Place, the South Central Tower and wall, the Southern Wall, the Inner
Garden Wall and the Garden Wall form a group.