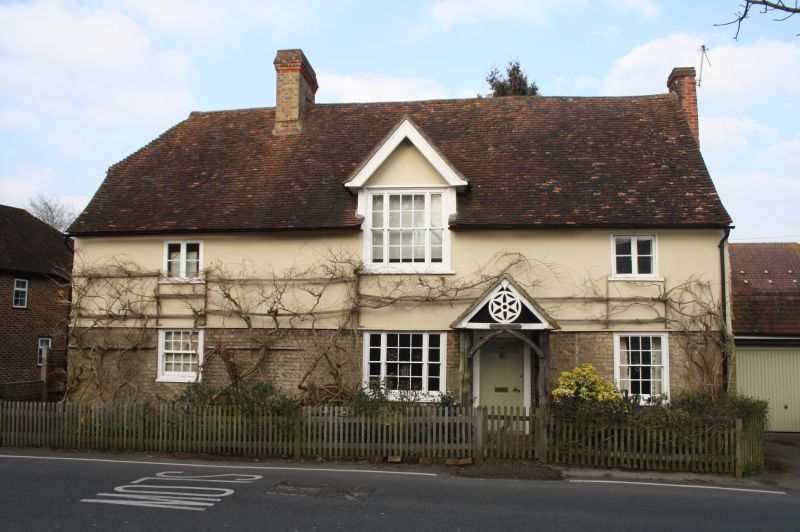 II
House. A circa 1500 former open hall house with C17 inserted chimneystack and rebuilding of service end, C18 staircase and other alterations and refronting in early C19. Timberframed building, refronted in render to first floor and yellow brick to ground floor. High pitched tiled roof, gabled to the north and half-hipped to the south with off central brick chimneystack to the south and external brick chimneystack to the north. Two storeys: three windows. irregular fenestration of C19 sashes and casements
PLAN: Single bay open hall with solar end to north with chamber above, the service end rebuilt and extended probably in the C17.
EXTERIOR: The front or east elevation has a tall central first floor tripartite sash window breaking through eaves with gable above flanked by C19 casement windows. The ground floor has a central C19 gabled porch supported on wooden piers with six-panelled door. The south elevation has a tile-hung upper floor and galleted stone walling to the ground floor, a mixture of sash and casement windows and a doorcase with flat hood on brackets.
INTERIOR: Ground floor central room (original open hall) retains a roll-moulded dais beam, inserted ceiling with chamfered beams and a C17 fireplace with wooden bressumer and stone sides. The northern room, the original parlour, has unchamfered beams, indications of an original partition in the middle. The original access from the parlour to the solar above was by stepladder, the trimming visible on the west side. The south room, formerly the service end has been totally rebuilt and extended westwards and southwards. There is a 1820s iron bread oven door by Higgs of Lambeth. Access to the upper floor is now by an C18 winder staircase with a plank door on pintle hinges below. The upper floor has the early C16 wall frame exposed, including the original west wall with close-studding and original wooden mullioned windows, the partition walls between the hall and solar with crownpost with two downbraces, collar beam and curved braces and original sans-purlin rafters exposed in the north room with marks where there was a later lath and plaster ceiling. The north end is half-hipped internally.

A late medieval single bay former open hall-house with solar and chamber to the north, the service end probably rebuilt in the C17 when a chimneystack was inserted and the hall ceiled over, refronted in the early C19.
[Unpublished report by Alan Dell of 1994.
Similar dendro-dated late medieval features shown in RCHME publication "The House Within.]