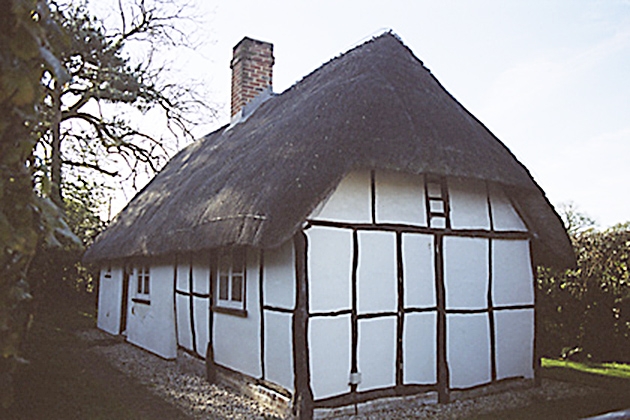 Cottage. Circa late C18 or early C19, partly refaced, rebuilt or extended later in the C19. Plastered timber-frame, extended or refaced in rat-trap bond brick. Straw thatched roof with half-hipped and hipped ends. Brick axial stack off centre. PLAN: 2-room-plan single-storey cottage with a central axial stack; the smaller left room with a narrow unheated room at the left end is probably a later C19 addition. EXTERIOR: Single-storey. Asymmetrical 3-window east front with 2-light casement on right, C20 metal-frame casement to left of centre and plank door and very small single-light window on left. At the right-hand, north, end a corrugated-iron clad outshut. At rear the wall-framing is exposed on left. INTERIOR: The right-hand [north] room has unchamfered ceiling beams and some exposed wall-framing in rear wall. The left [south] room is lined in match-boarding and has a C20 chimneypiece. NOTE: The cottage is situated on a narrow plot of land on the roadside and it reputed to have been built by squatters.