A Grade I Listed Building in Shoreham, Kent 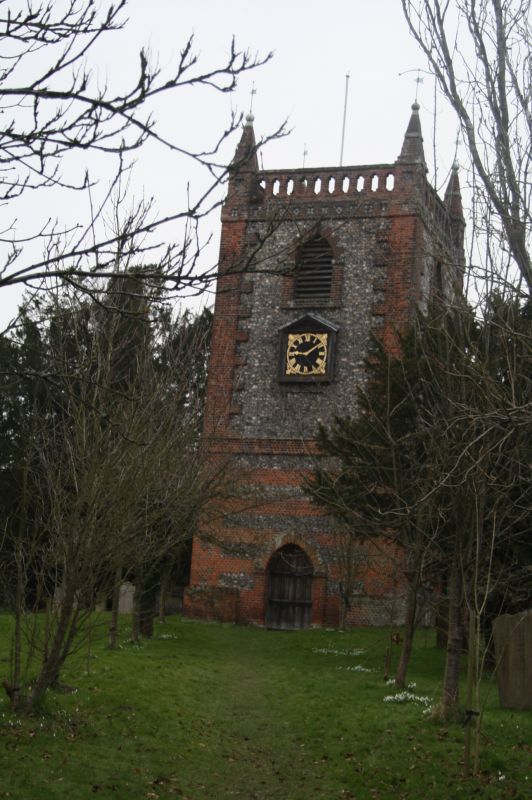 10-SEP-1954
I
Church sited on the edge of a village rich in historic buildings. The foundations of the Norman chancel were found under the nave in 1956-1957. C14 north wall; north chapel early Perpendicular; other features mostly late Perpendicular; c.1775 west tower, rebuilt after a fire. Chancel rebuilt and the north east vestry/organ chamber added in the 1860s restoration by Woodye; restoration in the 1950s.

EXTERIOR: chancel with coped gable, diagonal buttresses with set-offs and three-light east window of 1953 (following war damage) with reticulated tracery. One Decorated and one Perpendicular style window to the nave. The C14 north chapel (now the vestry) has a two-light window (tracery much renewed), Woodyer's eastward extension is largely Decorated style but has a three-light Perpendicular east window. The south aisle is buttressed, one buttress partly rebuilt in red brick with three-light Perpendicular windows (much stonework renewal) with cinquefoil-headed lights and Tudor arched heads. Very lively design to three-stage tower with red brick banding to the lower and clasping toothed pilaster buttresses to the upper stages, above a red brick platband. The tower has a pierced red brick parapet and obelisk pinnacles with ball finals. Windows and doorways in the tower have proud architraves with keyblocks and capitals; pedimented clockface on west face, 1857 clock. The south west porch is remarkable: timber-framed and gabled with renewed cusped and pierced bargeboards. Although it has been extensively repaired the front posts and spandrels each side of the doorway are constructed out of the solid. The spandrels are carved with blind tracery. Much of the construction above the doorway and of the side walls appears to be C19 with ad hoc repairs, but the design of a plain crown post braced to the collar purlin may be original. The timber framed sides of the porch sit on a flint base and the tier of panels below the middle rail have flint infill. Above the rail are, to the front, five-light square-headed timber mullioned openings with traceried heads and, to the rear, panels filled with diagonal boarding.

INTERIOR: The nave has a medieval four bay Perpendicular crownpost roof, the crownposts with moulded capitals and bases and four-way bracing. The south chancel chapel has a probably late medieval boarded, panelled roof with flat carved bosses at the intersections of the ribs and a C19 parclose screen, made locally. Six bay south arcade with engaged shafts with capitals and moulded arches, one and half bays to the chancel. Probably late medieval tie beam and common rafter roof to the south aisle. The chancel roof is 1860s and is boarded and panelled, including one bay of the nave. C19 reredos of stone panels with painted figures under ogee arches, the stone panelling extending across the width of the sanctuary. Octagonal responds to the moulded arch into the north chapel. Stone flag flooring to nave, salvaged from Shoreham Place and laid in 1955-1957. Impressive late medieval (restored) timber screen with rood loft with lierne vaulting extends across the width of the nave and south aisle, the main doorway to the nave off-centre and the south end projecting across one of the aisle windows. This is said to be the only surviving screen in Kent that extends across the full width a church.

The path to the church from the village is planted with Irish yews, said to date from 1867.
SUMMARY OF IMPORTANCE: St Peter and St Paul is a largely medieval church with an outstanding late medieval timber-framed porch and very lively polychromatic C18 tower. The interior includes a late medieval rood screen, late medieval roofs and good quality fittings re-used from Westminster Abbey.