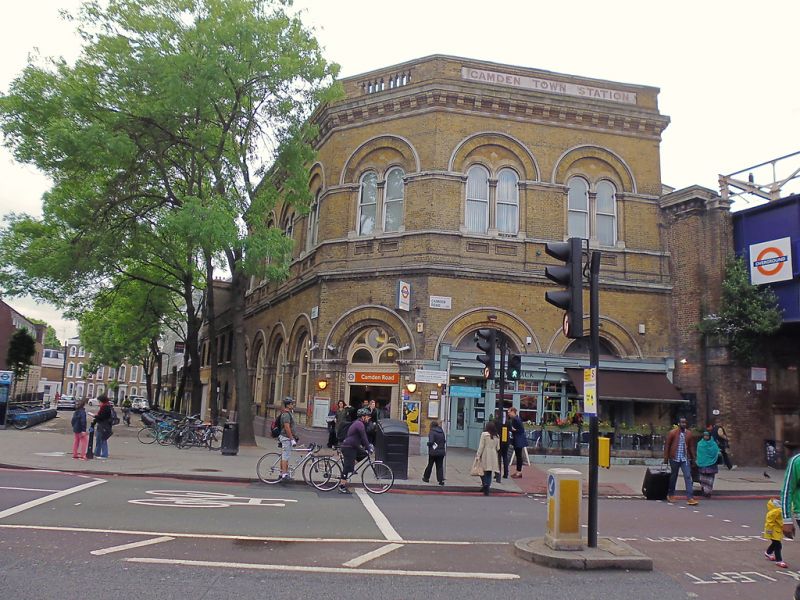 Includes: No.223 Camden Road Station ROYAL COLLEGE STREET.
Includes: Nos.13-23 Camden Road Station BONNY STREET.
Station. 1870. By EH Horne. For the North London Railway.
Yellow stock brick with stone dressings.
EXTERIOR: 3 storeys. Single bay entrance front on angle
between Camden Road and Bonny Street: arched opening with
lunette of circular tracery within gauged arch, dentil
cornices at first and second floor level, parapet. Camden Road
elevation contains shopfront on ground floor set below 2 brick
arches; granite drinking fountain in form of a pylon to north,
below railway bridge; parapet inscribed in sunken letters
CAMDEN TOWN STATION. Bonny Street elevation: 4 arched windows
per floor, with herringbone brick infills to first storey
lunettes over stone mullions; parapet has panel inscribed in
sunken letters NORTH LONDON RAILWAY. The station complex
continues west along Nos 13-19 Bonny Street with offices and
former waiting rooms above goods stores, all faced in the same
yellow brick, with arched windows and stone mouldings. Royal
College Street elevation: projecting Classical arched entrance
with a pair of four-panel doors below fanlight; cornice has
guttae of cut brick.
INTERIOR: triangular booking hall has coffered roof with
central cast-iron column. Booking office inserted 1984
replacing earlier, and of no interest. Original stairs with
cast-iron rails leading up to both platforms. West-bound
platform retains its projecting canopy supported on cast-iron
columns with ornamental spandrels.
HISTORICAL NOTE: this station was opened in December 1870,
replacing an earlier station of 1850 on a different site. It
is the only survivor of the Italianate brick station buildings
erected in the 1870s along the North London Railway to replace
the original wooden buildings of the line, and one of the few
suburban stations of the period to survive in London. The
extent of the ancillary buildings along Bonny Street suggests
that this was a busy station of some prominence. Renamed
Camden Road station in 1950, the station was refurbished in
1984 by British Railways and the Greater London Council.
(Buck G: A Pictorial Survey of Railway Stations: London:
-1992: 154-155; National Railway Museum: North London Railway.
A Pictorial Record: York: -1979).