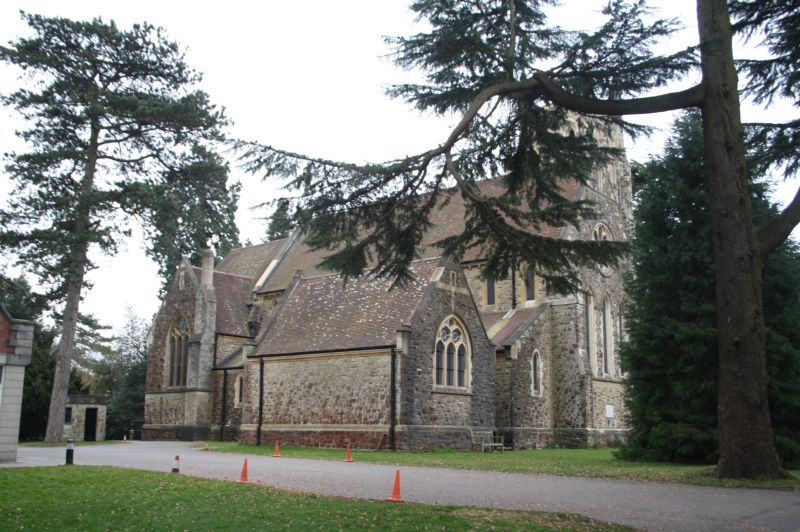 Church. 1877-1880 by John Hooker for James Thompson in Early English Style.
Built of snecked Kentish ragstone with ashlar dressings and tiled roof. Nave with
aisles, lower apsidal-ended chancel, south west tower over porch and south tran-
sept and organ loft and vestry and hall. Massive tower in 3 stages with corner
buttresses. Lower storey has stone niche with Saint. Trefoliated-headed arch to
porch with double colonnettes and double lancet with circular window above to
west. 2nd stage has 2 lancets to each face. 3rd or bell stage has 2 lowered
lancets with 2 sets of columns and 4 small lancets below octagonal stone
crockets. Turret to east. West front of nave has 3 lancets surmounted by a rose
window. South aisle has 3 lancets divided by buttresses and 6 1 cets to clere-
storey. South transept has large traceried window and cross-shaped saddlestone.
Apsidal-ended chancel has double lancet windows with quartrefoil above. Organ
loft and vestry opposite the south transept has a similar traceried window and a
doorcaae with Caernarvon arch. North aisle has 3 lancets but clerestory has 9.
The hall attached to the north aisle is gabled with a traceried window to east and
west and Caernarvon arched door to east and west. Interior has a 4 bay arcade
with clustered columns with foliate decoration and between arches carved roundels
with scenes from the Gospels. Clerestorey above with lancet windows. West end
has 3 lancets surmounted by a rose window which has stained glass by Clayton &
Bell. The marble font is a copy of one in Florence Cathedral. Quatrefoil-shaped
bowl with putti and spiral shaped shaft with foliate base. Nearby is a decorative
bronze tablet to James Thompson who endowed the church. Roof of arched braced
type. Pulpit of Derbyshire alabaster with marble shafts and suspended hexagonal
wooden canopy. South transept has a stained glass window by Clayton & Bell
depicting Faith, Hope and Charity. Chancel has stained glass by heaton, Butler
and Bayne. Painted boarded roof depicting the firmament and angels. Original
pews and organ.