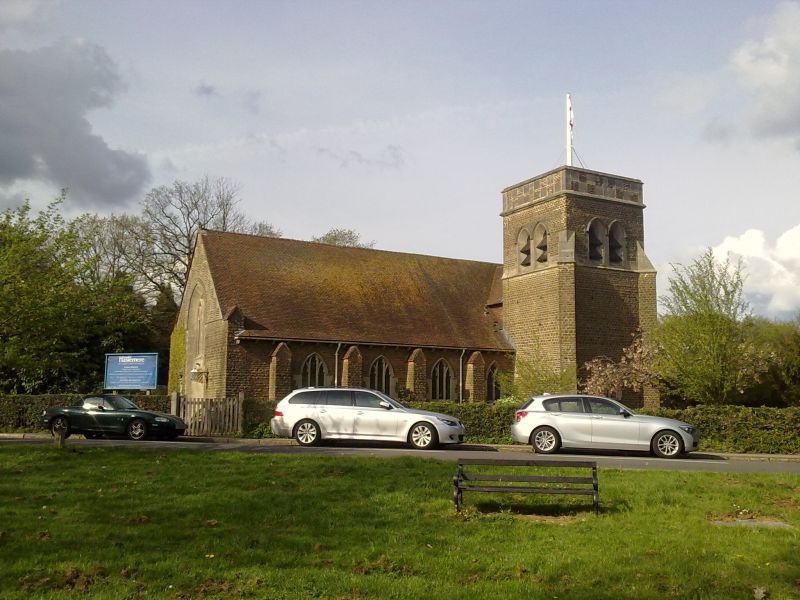 BUILDING MATERIALS: built of coursed Bargate stone rubble with ironstone galleting, freestone dressings and chequerboard decoration to the west gable end and tower parapet. There is a band of zigzag tile on edge decoration and the under floor stone ventilation grilles have the appearance of miniature traceried windows. Tiled pitched roofs.

PLAN: three and a half bay nave and three bay chancel in one with north and south transepts. The south transept contains the organ and an attached south east tower of two stages. The north transept, originally a choir vestry, is now a Lady chapel. In the north east corner is a ground floor vestry and WC and above a parish room.

EXTERIOR: the west end of the nave has a chequerwork gable and large arched window with intersecting tracery above a double door set back in a cambered architrave. To the left of the door is a niche with a bronze copy of Spooner's statue of St Christopher and to the right a copy of the original hexagonal stone lantern on a wall bracket, both items replaced after theft. The north and south walls of the nave have projecting stone corbels to the overhanging eaves and triple arched windows with trefoil heads and dripmoulds separated by gabled buttresses. The south eastern side has a two stage tower with chequerwork parapet, paired lancets to the bellstage with wooden louvres and diagonal buttresses. The south side has a double trefoil window to the lower stage. The eastern side of the north side of the nave has a gabled projection with chapel and vestry to the ground floor and small hall above.

INTERIOR: single barrel-vaulted roof to both nave and chancel. Both roof and walls are painted white. The roof trusses are supported on stone corbels and the nave windows are recessed behind cambered stone arches. Many of the windows have hand blown glass in metal panes. The south side of the nave has a 1934 stained glass window depicting St Christopher. The easternmost window to the north aisle has a stained glass Nativity scene of 1910. The metal pendant lighting is original and Spooner also designed the cast iron lectern in 1904 and oak pulpit with stylised foliage carving. The chancel is approached by a step and the chancel roof has stencil decorations designed by Spooner in 1928. The carved altar rails were re-ordered in 1972 when an altar was placed opposite the transepts and the choir stalls which originally faced inwards were at the same time re-arranged facing west. A hanging painted icon of the Crucifixion between the nave and chancel was designed by Spooner but not erected until 1950 as a memorial to the curate Christopher Tanner, who rescued eighty men during the Battle for Crete in May 1941. The original design for the east window was more elaborate but it was modified so that it did not conflict with the painted reredos. It consists of jewel bright geometric patterns by Christopher Whall of 1928. The reredos is an egg tempera triptych of The Company of Saints which was displayed at the Arts and Crafts Exhibition of 1912. Eight painted panels of saints, to a design by Louis Davis, are attached below the triptych. In the north east corner the vestry has a ceiling with exposed floor joists. A narrow stone spiral stair leads to a parish room which retains the original built-in bookcase and storage cupboards,stone fireplace and oak doors.

HISTORY: St Christopher's Church was built between 1902-1904 for the expanding population of Haslemers after the coming of the railway, and particularly for the inhabitants of the western side of the town who had a long walk to the original parish church in the centre of the town. The rector, George Aitken commissioned Charles Spooner as architect and the church was built at a cost of £4,200. Charles Sidney Spooner (1862-1938) was an Arts and Crafts architect, articled in 1881 to Sir Arthur Blomfield. He joined the Art Workers Guild in 1887 and was also an early member of SPAB and personally influenced by William Morris. He became a fellow of the RIBA in 1907. Spooner married Minnie Dibden Davison, a miniature painter, and he is known for stained glass and furniture, on which his wife collaborated. He taught furniture design at the Central School of Arts and Crafts under W R Lethaby and with A J Penty and Fred Rowntree started a furniture workshop called Elmdon and Co. At St Christopher's Church Spooner personally superintended the designing of the furniture and fittings and the reredos was jointly designed with his wife. Unusually for an Anglican church it was built on co-operative principles. The builder, Hutchison, was a Quaker and his company, Haslemere Builders, was run on a profit share basis. Spooner built five other churches, all listed grade II.

SUMMARY OF IMPORTANCE: a little altered Arts and Crafts Free Late Gothic style church built by the notable Arts and Crafts architect Charles Spooner. It is built of beautifully crafted local materials and has good quality interior fittings of varying dates by Spooner and his wife, the artist, Minnie Dibden Davison. An additional point of interest is that, unusually for a Church of England church, it was built by a Quaker who ran the company on co-operative principles.