A Grade I Listed Building in Bloomsbury, Camden 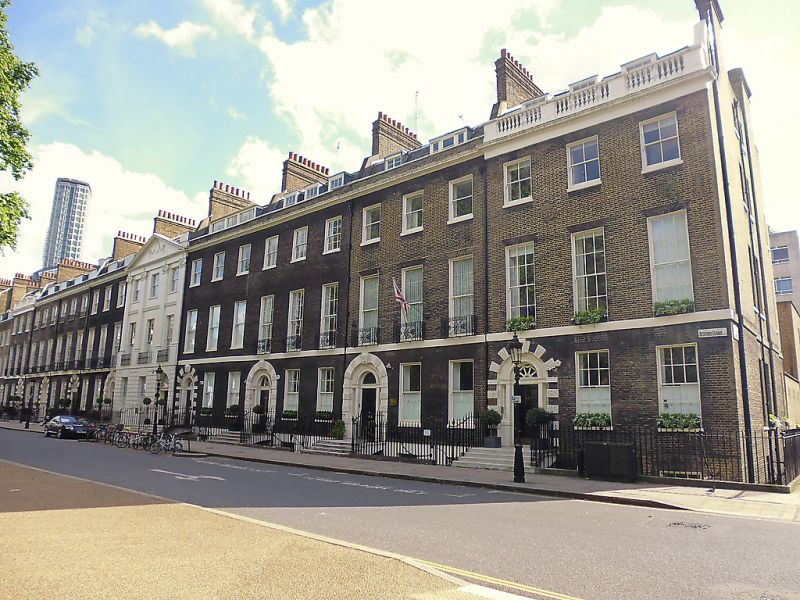 Includes: Nos.26, 26A AND 27 MORWELL STREET.
Terrace of 11 houses forming the west side of a square.
1776-1781. All built by W Scott and R Grews; perhaps designed
either by Thomas Leverton or Robert Palmer; for the Bedford
Estate. Nos 28-36 form a symmetrical terrace. Yellow stock
brick with evidence on most of the houses of tuck pointing.
Plain stucco band at 1st floor level. The centre house, No.32,
is stuccoed. Slate mansard roofs with dormers and tall slab
chimney-stacks.
EXTERIOR: 3 storeys, attics and basements. 3 windows each.
Recessed round-headed entrances with Coade stone vermiculated
intermittent voussoirs and bands; mask keystones. Enriched
impost bands and cornice-heads to doors. Side lights to
panelled doors, some 2-leaf. Fanlights, mostly radial
patterned. Gauged brick flat arches to recessed sashes, most
with glazing bars. The following have cast-iron balconies to
1st floor windows: Nos 29 & 30, 32-36 & 38. Cornice and
parapets, Nos 28 & 36 with balustraded parapets.
INTERIORS not inspected save for Nos 34-36, but noted to
contain original stone stairs with cast and wrought-iron
balusters of various scroll designs, decoration and features;
special features as mentioned:
No.28: 3 window return to Bayley Street, 1 blind. Rear
elevation with full height bow. Major renovation in 1910. 3
plaster ceilings, one dating from the renovation.
No.29: rear elevation with full height canted bay, bowed
internally. A plaster ceiling.
No.30: rear elevation with full height bowed bay. Fine
ceilings, one with painted cameos.
No.31: rear elevation with full height bowed bay. 2 fine
ceilings.
No.32: rusticated ground floor; 4 Ionic pilasters rise through
the 1st and 2nd storeys to support a frieze, with roundels
above each pilaster, and pediment with delicate swag and
roundel enrichment on the tympanum. At 2nd floor level a
continuous enriched band running behind the pilasters.

Entrance of Doric columns supporting an entablature beneath
the fanlight; double panelled doors. Rear elevation with full
height bowed bay. INTERIOR detailing and joinery particularly
good.
No.33: rear elevation with full height bowed bay. Internal
distyle-in-antis screen with capitals derived from the
Athenian Tower of the Winds. Plaster ceiling.
No.37: rear elevation with full height bowed bay. Original
wine cellar in the basement.
No.38: a late C19 timber staircase.
Some houses with original lead rainwater heads and pipes.
Nos 34 and 35 acquired by the Architectural Association -
Britain's first full-time school of architecture - in 1917,
whose Head and, from 1920, Director of Education, was Robert
Atkinson. In 1919-21 he made many alterations and added
studios to the rear, which latter are of very austere design.
Ground floor and first-floor front rooms made into one, now
respectively lecture room and library, with missing mouldings
to No.34 matched up with those surviving in No.35. This
includes first-floor ceiling to No.34. First-floor library is
a war memorial, with fitted bookcases by Atkinson and a
memorial tablet to fallen members, unveiled 1921 and recarved
after 1945 to commemorate both World Wars. No.35 has no
staircase, but retains some fireplaces and original mouldings.
Both houses have rear elevations with full-height bowed bays.
No.36 also with full-height bowed bay to rear.
SUBSIDIARY FEATURES: attached cast-iron railings to areas with
urn or torch flambe finials. Most houses with good
wrought-iron foot scrapers.
HISTORICAL NOTE: the houses in Bedford Square form a most
important and complete example of C18 town planning. Built as
a speculation, it is not clear who designed all the houses.
Leverton was a country house architect and may have been
involved with only the grander houses; he lived at No.13 (qv).
Palmer was the Bedford Estate surveyor and may be responsible
for the vagaries of the square. The majority of the plots
leased by the estate were taken by Robert Grews, a carpenter,
and William Scott, a brickmaker. No.35 was the residence of
Thomas Wakley, reformer & founder of The Lancet, also of
Thomas Hodgkin, physician, reformer & philanthropist (LCC/ GLC
plaques).
No.36 was acquired by the Architectural Association in 1927
and adapted as offices and members' rooms by Atkinson, who
added more studios to the rear - these last again of very
simple design. The presence of the Architectural Association
in one of London's most important squares did much to promote
the special interest and importance of Georgian London,
especially amongst the many international architects and