Numbers 15 and 16 and Attached Railings 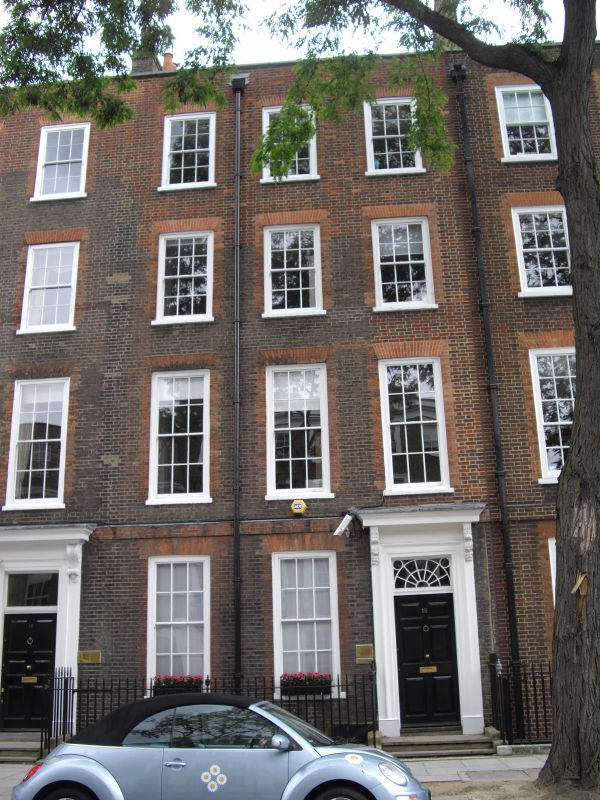 Pair of houses forming part of a terrace. 1717-18 by Robert
Burford, carpenter, on land granted to him and George Devall,
plumber, in 1716 by Dame Margaret Skipwith. Updated c1820.
Brown and yellow stock brick with some refacing of upper
storeys. Roofs not seen behind parapets. 3 windows each.
EXTERIOR: 4 storeys, basement and attic. 2 rooms deep, with
cross passage and closet wing. Brick bands at first floor
level. Gauged red brick arches and dressings to flush frame
sash windows. Wood architraved doorcases with good carved
brackets, panelled soffits to flat hoods, No.15 with patterned
fanlight, both with panelled doors.
INTERIORS: No.15 with panelled entrance and staircase hall.
Open-string staircase with decorated ends and carved turned
balusters, unpainted, with corresponding dado on opposite wall
having Corinthian pilasters at head, foot and turn of flights
rises to first floor. Ground and first floor rooms with raised
and fielded panelling and box cornices. On ground floor a
panelled cross passage between front and rear rooms; in this
space on upper floors a closed string staircase with turned
balusters rises to third floor. Upper floors not inspected.
No.16 with fully panelled entrance and staircase hall, the
former with fluted Corinthian pilasters forming inner arch.
Open-string staircase with decorated ends and twisted
balusters, 3 per tread, rise to first floor with corresponding
dado decorated with Corinthian pilaster strips at head, foot
and turn of flights. Ground and first floors with full-height
raised and fielded panelling and early C19 fireplaces. C20
stair on upper floors.
SUBSIDIARY FEATURES: cast-iron railings to areas, with
decorative finials.
HISTORICAL NOTE: these houses are comparable in quality with
Nos 8, 9, 12 and 13 Bedford Row (qv). They are particularly
interesting in that their ground-floor plan was not modified
in early C19 by the incorporation of the cross-passages into
the front rooms as buffet alcoves. The principal houses of
this group form an exceptional group.