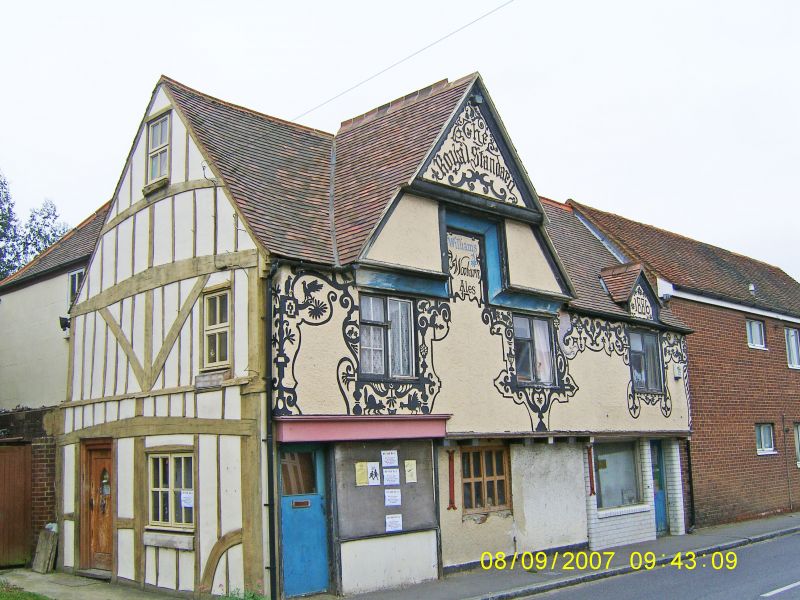 House, formerly public house. Circa early C16, remodelled C17 and extended late C19. Plastered timber frame with pargetting at front, brick-faced end wall and brick extension at rear. Clay plain tile roof . Axial stack, truncated below roof. PLAN: 3-bay Medieval house with central open hall and storeyed end bays. In about mid C17 a floor and axial stack were inserted into the hall and probably at this time the gable and pargetting were added to the front. At the back there is a later outshut and a circa late C19 wing. EXTERIOR: 2 storeys . 3 window north front with jettied first floor and large over sailing gable to left. The ground floor is roughcast, but above the jetty it is pargetted with strap work and foliage decoration in low relief; in the gable the names The Royal Standard and William Wooburn Ales is probably a C19 alteration; the coved gable eaves is raised at the centre and the gable apex over sails above; small gable to right also pargetted. C20 casement windows. C20 shop fronts to left and right. Roof at rear carried down over outshut on left and late C19 brick parallel range to right. INTERIOR: on the ground floor the partition between the hall and left room has been removed, the part has large unchamfered closely-spaced joists; the inserted hall ceiling has roughly chamfered axial beam and thin joists, inserted axial stack has brick fireplace with chamfered timber lintel. The right-hand room has partly raised ceiling and beam supported on post made from reused fireplace bressumer. High up in the back wall of the hall is a 2-light window with diamond section mullions. Medieval 3-bay roof is intact and has two closed tie-beam trusses with cambered collars and clasped purlins with curved wind-braces and common-rafter couples intact; the hall bay is heavily smoke-blackened including the plastered hall sides of the closed trusses, but the end bays are clean.