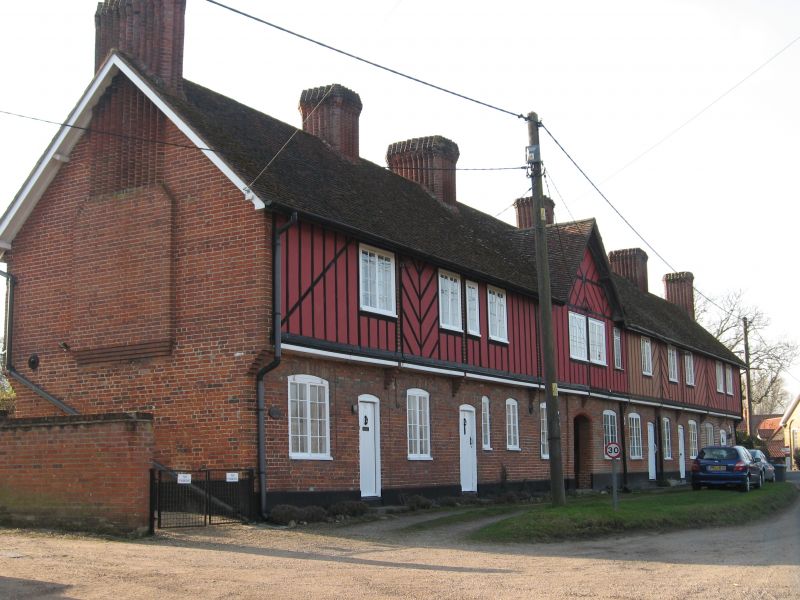 Row of 6 cottages, originally 7. Late C19. Probably by Thomas Cotman for the Cobbold family. Red brick with jettied and timber-framed first floor. Roof of plain tiles to front and pantiles to rear. Massive and elaborate central ridge and end stacks. Vernacular revival style. 2 storeys. 12- window range at first floor of single and 2-light casements with glazing bars. 11 similar windows below, with 2 plank doors to No. 1 (now a single dwelling) to left, Nos. 3 and 4 under a central arch with first floor gable over and Nos.5, 6 and 7 to right. First floor framing of light scanning has the brick partitions expressed on the front at intervals. Pear also has a jettied first floor, similar casements and doors, and a central wing with outshut behind. Interiors are reported as retaining contemporary fireplaces and plank doors. A fine quality row of cottages forming part of a group' h nearby listed buildings. HISTORY. This row is reputed to have been converted from the maltings of a nearby Cobbold brewery, hence the name. The architect was probably Thomas Cotman who designed Cranmer House, Felixstowe (qv) for the same family in 1885. The stacks on both buildings are very similar.