A Grade I Listed Building in Ladywood, Birmingham 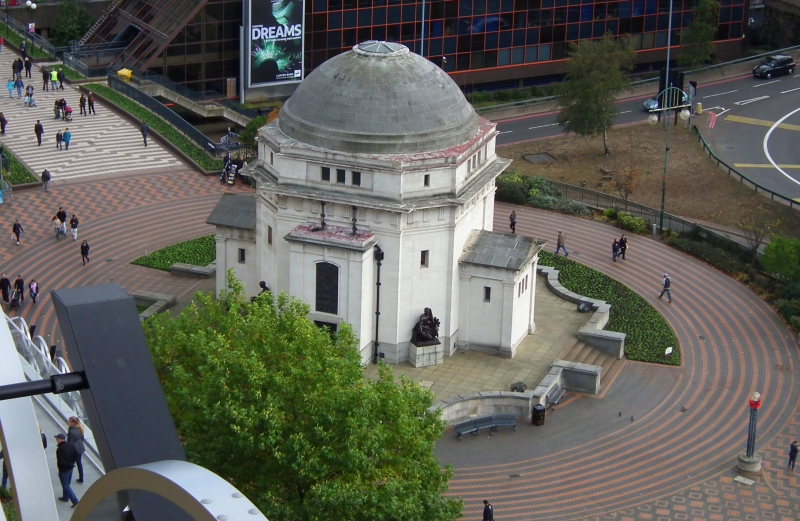 MATERIALS: exterior of Portland stone on a granite base, with bronze statuary and doors. Interior in Beer stone

EXTERIOR: the Hall of Memory, a classical octagon, stands in Centenary Square in the centre of Birmingham. It has a heavy Doric entablature and attic, and a low dome. There are pedimented projections on the four long sides, that to the south-east forming the entrance. The short diagonal faces are set back, framing four bronze seated figures on Cornish granite pedestals by Albert Toft (1862-1949), a native of Handsworth, representing the Services. One, a bare-chested sailor in a crouching position and holding a coil of rope in one hand and a ship's wheel in the other, represents the Navy. Another bare-chested figure is of a soldier, representing the Army. He is also in a crouching position and rests his tin helmet on his left leg with his right hand on the barrel of a machine gun. The Air Force figure, again bare-chested and crouching, holds a blade and aerlions of an aircraft in his left hand. The fourth figure represents the Nursing Service and here a woman crouches down whilst holding a wreath in her left hand.

INTERIOR: visitors enter the Hall of Memory through huge cast bronze doors. Inside the Hall, which has a ribbed and coffered dome set below the outer one and Doric detailing, a sarcophagus-shaped dais or tomb of Siena marble stands in the centre of the marble floor. A glass and bronze casket made by the Birmingham Guild rests on its top containing two books: the First World War and Second World War Rolls of Honour. A third Roll of Honour contains the names of Birmingham citizens who have died in campaigns since the end of the Second World War. Marble paving and seats occupy the angles of the Hall with bronze flambeaux above.
Facing the main entrance is a stained-glass window with a cross designed by Richard Stubington (1885-1966). High on the walls over the three doorways are three carved Art Deco bas-relief plaques by William Bloye (1890-1975), a Birmingham sculptor, depicting scenes from the First World War. ‘Call’ shows men leaving home to join up; ‘Front Line’ represents a party of men in the firing line; ‘Return’ shows men, several badly wounded, returning to their homes. The plaques carry three inscriptions:
Panel 1: OF THE 150,000 WHO ANSWERED THE CALL TO ARMS / 12,320 FELL / 35,000 CAME HOME DISABLED
Panel 2: AT THE GOING DOWN OF THE SUN AND IN / THE MORNING WE WILL REMEMBER THEM
Panel 3: SEE TO IT THAT THEY SHALL NOT HAVE / SUFFERED AND DIED IN VAIN

During the First World War 150,000 men and women from Birmingham served; 12,320 were killed and 35,000 wounded. In 1920 a design competition among Birmingham architects (judged by Sir Reginald Blomfield) for a war memorial was won by S.N. Cooke and W. Norman Twist. Their winning design was The Hall of Memory. They also designed a Portland Stone (a material then new to Birmingham) colonnade which originally stood opposite it. That was moved to the Peace Gardens (formerly St Thomas’s church) in Bath Row when Centenary Square – intended as a grand civic space - began to be laid out soon after. The foundation stone was laid on 12 June 1923 by the Prince of Wales, and the Hall was opened by HRH Prince Arthur of Connaught on 4 July 1925. The overall cost was £60,000 which was raised entirely by public donations, and almost all the design and construction work, along with the memorial fittings, was by Birmingham craftsmen. The Hall was built by John Barnsley and Sons, and John Bowen and Sons.

The Hall of Memory, Birmingham, is listed at Grade I for the following principal reasons:
* Historic interest: as an eloquent witness to the tragic impacts of world events on this community, and the sacrifices it made in the conflicts of the C20;
* Architectural interest: as an unusual and ambitious architectural memorial to the city's war dead
* Sculptural: for the notable bronze figures of service personnel by Albert Toft;
* Setting: as a key element of Centenary Square, one of Birmingham's principal civic spaces.