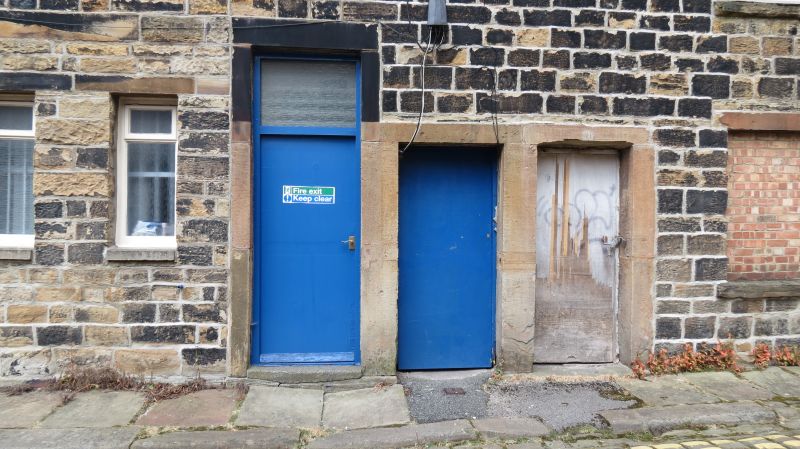 Four small courtyard cottages in row formerly of 5 (No.2 at
west end recently demolished), now partly store and partly
unoccupied at time of survey (1991). Pre-dating 1848, with
later alterations, No.10 remaining the most complete of the
four units. Watershot coursed squared sandstone (roof not
visible but probably stone slate). Single-depth plan, each
cottage single-fronted, built in pairs with doorways of each
pair flanking a lobby entry doorway.
EXTERIOR: 3 low storeys but all remodelled to 2 storeys except
No.10; formerly 4 windows at 1st floor but now 5; with a
square-cut stone gutter cornice. Nos 8 & 10 have triple
doorways with square-cut monolith jambs and lintels, all
formerly of equal height but the lintel of No.8 raised to make
an overlight; No.10 has one window on each floor, the topmost
square, all with raised plain surrounds but all now blocked,
plus a small oblong window at 1st floor over the door (also
blocked); No.8 to the left has the lintel of a formerly
similar small window over the doorway, an altered window at
ground floor and an enlarged window at 1st floor.
Nos 4 & 6 have a lobby entry doorway like Nos 8 & 10, but the
former doorway to No.6 has been altered as a window and the
doorway to No.4 has been raised (the lintel retaining the
painted number "4") and is now blocked with brick; and both
these cottages now have C20 windows.
INTERIOR not inspected.
Unusual survival of a type of dwelling generally outlawed
after the Public Health Act of 1848.