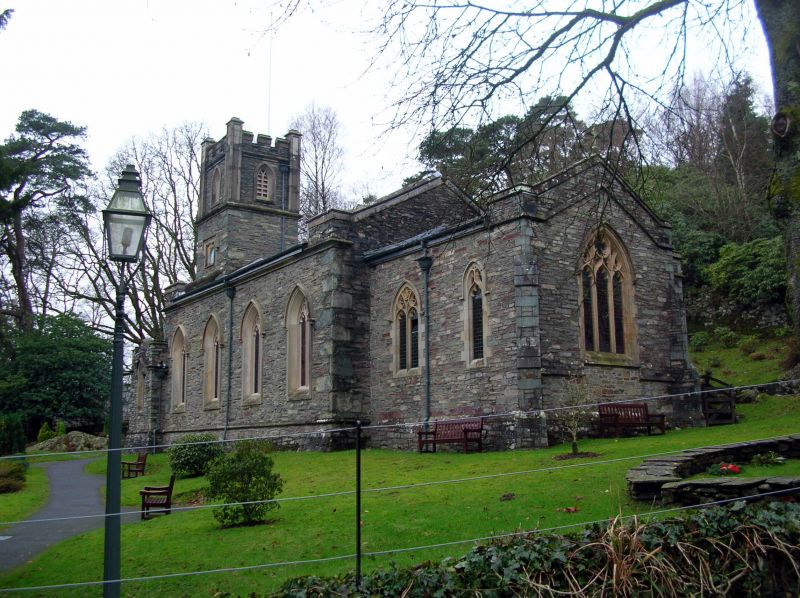 GV II*
DATES OF MAIN PHASES, NAME OF ARCHITECT: Parish church of 1824, by George Webster of Keswick; with chancel added 1884.

PLAN: Nave with lower and narrower chancel, west tower with vestry on its south side, north porch, north organ chamber.

EXTERIOR: The nave is simple Perpendicular in the non-archaeological style of the 1820s. Nave and chancel have moulded cornices and coped gables which return above the eaves as short parapets, and the nave has lead rainwater heads dated 1824. The nave is 4 bays and has 2-light windows with wooden tracery. The 3-stage tower has diagonal buttresses in the lower stage, panelled clasping buttresses in the upper stage rising above the embattled parapet as corner pinnacles. The west doorway is in a deep splay and has a segmental pointed arch, above which is a single pointed window. The second stage has round clock faces in square moulded frames, beneath drip moulds. There are Y-tracery belfry openings with louvres. On the north side of the tower is the embattled porch, now roofless, which has arched east and west entrances with continuous deep splays, and opens directly to the gallery stair. The chancel has diagonal buttresses, 3-light Perpendicular east window, 2-light Decorated and 1-light south windows, and a single-light north window. The organ chamber has a plain parapet and 2-light Decorated east window. The embattled gabled vestry added to the south side of the tower has a south lancet window.

INTERIOR: The interior is plain, with a simple 2-centred chancel arch with roll moulding, flat C20 nave ceiling, and polygonal boarded chancel ceiling with moulded ribs, on a moulded cornice. The nave and gallery retain original doors with vertical panels. Walls are plastered. There is a parquet floor in the nave and decorative tiles in the chancel. Access to the gallery is by a stone stair leading directly from the north porch, which has iron balusters and wooden rail, and leads to a panelled gallery and tower doors.

PRINCIPAL FIXTURES: The west gallery is on 3 Tudor arches with posts, the central bay narrower and with quatrefoils in the spandrels. The gallery front has Gothic panelling, above which is a glazed screen that was added in 1995. The polygonal wooden pulpit, with blind cusped panels, is also one of the original fixtures of the church, as is probably the plain octagonal font. The benches are late C19, with moulded ends incorporating arm rests. Stained-glass windows commemorate, among others, Dr Thomas Arnold (d 1842), headmaster of Rugby School (who holidayed nearby), and the step-daughters of Dora, William Wordsworth's daughter, by Henry Holiday (1891), below which is a memorial brass plaque of some interest.

HISTORY: Built as a chapel-of-ease in 1824. The patron was Lady le Fleming of Rydal Hall. The architect, George Webster of Keswick (1797-1864), was a prominent local architect responsible for over a dozen churches. His original specification for the church is in the Cumbria Record Office, Kendal. William Wordsworth, who lived at nearby Rydal Mount from 1813 until his death in 1850, helped to choose the site and composed 2 poems inspired by the foundation of the church. Wordsworth was chapel warden in 1833, but was not enamoured with the building, expressing his `regret that the architect did not furnish an elevation better suited to the site in a narrow mountain pass, and...better constructed in the interior for the purpose of worship'. An early visitor was the 11-year-old John Ruskin in 1830, who noted the `chasteness & elegance' of the windows and the neatly carved pulpit. The chapel has numerous associations with other literary and cultural figures of the C19 and is the venue for an annual Wordsworth Memorial Lecture. Wordsworth complained that the original church had no chancel or vestry, which was rectified in 1884 when chancel, organ chamber and vestry were added.

REASONS FOR DESIGNATION: The church of St Mary, Rydal, is designated at Grade II* for the following principal reasons:
* It is a well-preserved early C19 church in a simple Perpendicular style, retaining its original character and detail, including the gallery and pulpit, with later extensions that harmonise with the earlier work through use of similar materials.
* The church is of special historical interest for its association with William Wordsworth, who lived nearby, was a regular worshipper and helped choose the site of the church, and other C19 literary and cultural figures.
* The stained glass is of high order.