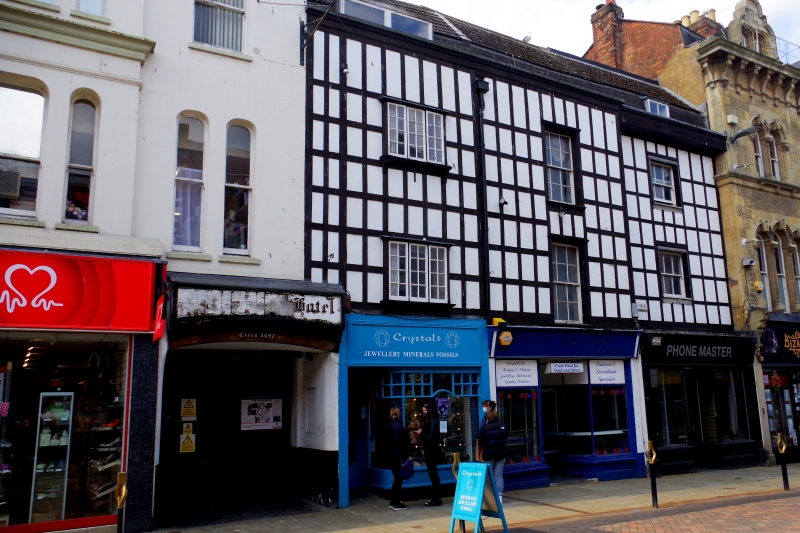 Inn, now part of a hotel. C15 range above late C12 undercroft,
the range altered and extended in late C16, late C18 and in
C19.The undercroft of stone rubble with dressed stone details;
the range above timber-framed with later brick extensions
rendered in part; slate roof.
PLAN: a long C15 range above undercroft at right angles to the
street, with a short cross-gabled wing at the south end, on
the east side of a courtyard set back from Westgate Street and
entered through a carriageway below the west end of No.17
Westgate Street (not included) and from Bull Lane. C18
extensions to the west front of the range and extensive C19
additions at the south end of the range.
EXTERIOR: the range of two storeys and attic, placed at right
angles to the street, is built above the earlier undercroft;
the north gable-end wall abuts the rear wall of No.17 Westgate
Street. Late C18 single-storey extension on ground floor to
front of range facing yard has a large, semicircular bow
window to left lit by a row of four curved sashes with glazing
bars (each 4x4 panes). Entrance doorway to undercroft to right
and entrance doorway to hotel lobby approached by flight of
steps. Further right a large C18 bay in extension with sashes
with glazing bars. The roof of the extension is a balcony with
a timber balustrade of square posts and stick balusters. Above
the extension the front of the gabled wing has exposed
timber-framing of square panels and diagonal braces.
INTERIOR: within the range portions of timber-framing exposed
on both floors; late C19 staircase from entrance lobby to
first floor; large bar to right of lobby opens into C18
extension to front of range, a storey post to the former front
wall of the range, now within the bar, carries a curved brace
which may have supported the former first-floor front jetty.
The fireplace in the rear (east) wall of the bar has moulded
stone jambs of c1500 and a shallow ogee-arched head without
moulding, probably a replacement of the original.
The larger part of undercroft below the southern end of the

range has a segmental barrel vault in five bays defined by
transverse chamfered arches which spring from semicircular
wall piers with concave capitals and square abaci; in the rear
wall a doorway with a flat lintel and a segmental-arched
recess in each of two adjoining bays in the west wall at the
north end. The lateral walls of the vaulted undercroft incline
as though pushed outwards by the thrust of the vault.
Flagstone floor is raised above the original level. Above the
smaller northern part of the undercroft two timber bridging
beams, the northern beam with stopped chamfers. A brick walled
passage from the north-west corner of the undercroft leads to
a brick vaulted cellar below No.19A Westgate Street (qv).
HISTORY: the undercroft, an exceptionally fine and early
surviving example of its type which bears comparison with
examples elsewhere in the country and in Northern Europe, is
the surviving part of a merchant's house in a property which
originally extended westward to Bull Lane, and recorded in the
St Peter's Abbey rental of 1455 as a great tenement that had
belonged to Benedict the Cordwainer in the reign of Henry III.
The property is believed to have been developed as an inn in
c1500 by the abbey, and is first recorded as the Golden Fleece
Inn in 1673. Considerable alterations and repairs were
recorded between 1772 and 1778.
(Transactions of the Bristol & Gloucestershire Arch. Society:
Household HGW: The Fleece in Upper Westgate Street.:
1946-1948: 37-57; BOE: Verey D: Gloucestershire: The Vale and
the Forest of Dean: London: 1976-: 245-6).