Roman Catholic Church of Our Lady Help of Christians, including sign and boundary wall 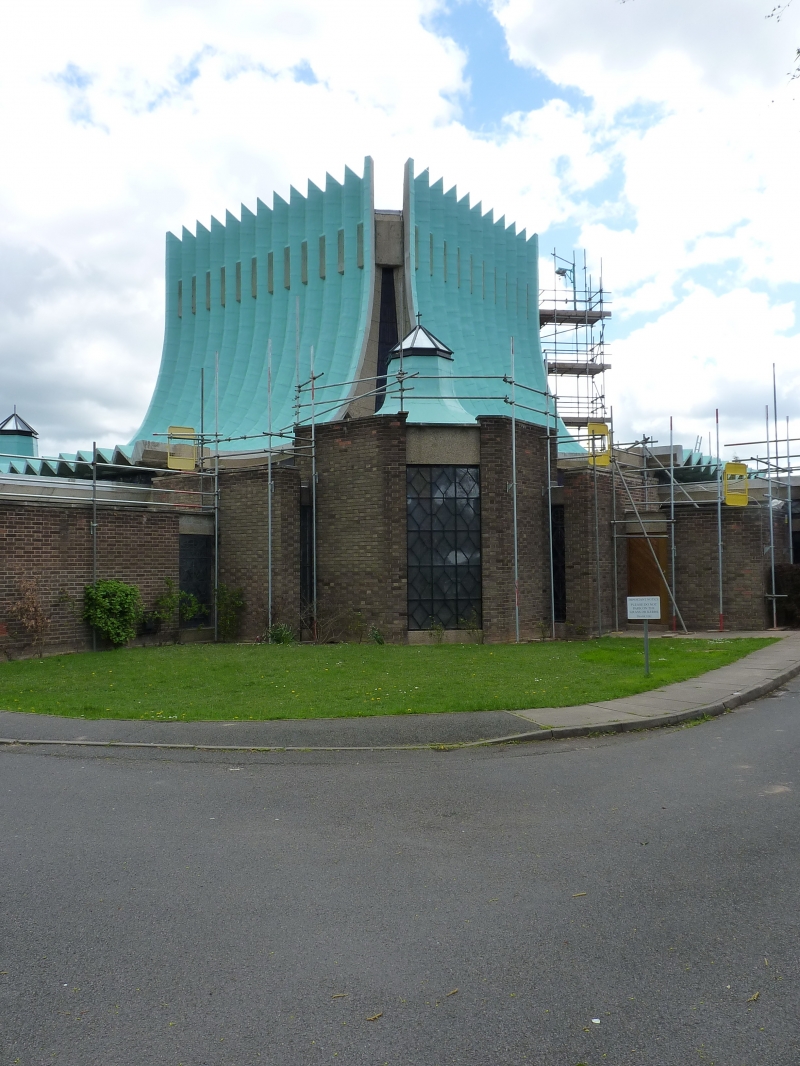 Entry Name: Roman Catholic Church of Our Lady Help of Christians, including sign and boundary wall

A Roman Catholic church of 1966-7 by Richard Gilbert Scott of Giles Scott, Son and Partner with coloured glass windows by John Chrestien.

A Roman Catholic church of 1966-7 by Richard Gilbert Scott of Giles Scott, Son and Partner with coloured glass windows by John Chrestien.

PLAN: a 'T'-shaped plan with octagonal baptistry and Lady Chapel in the angles; central entrance porch and sacristy to rear of the sanctuary.

EXTERIOR: Tte exterior has low brick walls and exposed concrete beams, over-sailed by jagged-edge porch and dominated by a soaring roof with ribs curving upwards forming a broad central tower. The Baptistry and Lady Chapel have identical bell-shaped roofs, with lanterns, that to the Lady Chapel now replaced with uPVC framed glazing. The narrow vertical bands and angles of the church are filled with coloured glass including the baptistry and Lady Chapel, which each have a large, full height coloured glass window. The church has timber (double) doors throughout, their planking set at complementary angles with square bronze handles.

INTERIOR: a foundation stone behind the sanctuary reads: 'This stone was laid by the Right Reverend Joseph F. Cleary, Bishop of Cresima, V.G. on the fifteenth day of September 1966 A.M.D.G.'. The altar is set in the central crossing under the open roof, whose upward curved ribs, resembling swept curtains, dominate the high space, and lead to a central timber framed ceiling at the centre. This is further emphasised by the exposed chunky, angled concrete frame with aggregate panels. The areas between the three main roof vaults have clerestory glazing filled with panels of bright coloured glass made by the artist John Chrestien. His glass also fills the baptistry and Lady Chapel. The nave and chapels contain bespoke timber bench seating and frontals. The stepped, white marble sanctuary, with a carved marble altar, ambo and reserved sacrament. Suspended in the air above the sanctuary, is a crucifix in metal and timber (artist unknown) framed by the narrow vertical coloured glass windows in shades of deep scarlet.

The octagonal Baptistery and Lady Chapel have an exposed timber and steel framed roof with central lantern. The Baptistry has an octagonal, cone shaped marble font placed the centre of a decorative marble floor surround. The large coloured glass window by Chestien, in red and blue mainly, depicts the Christian symbol of the fish with an abstract motif above. The Lady Chapel has bronze and timber glazed doors. It has a white marble altar of similar design to the main altar. Behind it is a large plain marble reredos with a figure of Our Lady set on a small plinth. The large coloured glass window by Chrestien, depicting the lion of St Mark, symbolises the Christian victory over the Mohammedan Turks at the Battle of Lepanto in 1571 in whose memory Pope Pius V established the Feast of Our Lady Help of Christians.

The walls to the nave and transepts contain the stations of the cross in bronze framed coloured mosaic, with large Roman numerics in bronze to the corners (artist unknown). The confessionals in the side transept have coloured glass and timber doors (as before).

A low, concrete sign on a brick base (approximately 0.3m high and 5m long) to the right of the entrance is as shown on Scott's plans, though the original lettering has been covered by a new sign. The church is set back from the road and screened from it by a red brick wall (approximately 2m high and 45m long) with integrated sections of railings and entrances at either end, probably also built as part of the scheme in the late 1960s.

The Roman Catholic church of Our Lady Help of Christians was built in 1966-7 to a design by the architect Richard Gilbert Scott of Sir Giles Gilbert Scott, Son and Partner. The stained glass windows are by the painter John Chrestien, a friend of Richard Gilbert Scott, who had studied in Paris and lived in India. The foundation stone, inside the church, was laid on 15 September 1966 by the Right Reverend Joseph Cleary, Bishop of Cresima.

The church of Our Lady is one of a number of churches commissioned in the 1960s by the Diocese, built in order to serve the newly created suburbs of Birmingham, and to accommodate the new liturgical thinking that was emerging. The church in Tile Cross was to be built adjacent to the existing Roman Catholic Archbishop Williams Secondary School (now no longer there) and the Roman Catholic Our Lady Help of Christians Primary School. Timothy Dinan, then parish priest, had first commissioned drawings from Adrian Gilbert Scott of Sir Giles Gilbert Scott, Son and Partner in 1962, but these were rejected by the Diocese who felt they were too costly and over-ambitious. In 1965, after raising further funds, the Diocese tried again, and Richard Gilbert Scott, who by then had taken over the practice following the death of his uncle Adrian, drew up new plans. After lengthy negotiations and despite severe cost restrictions, the church was eventually built.

The church of Our Lady was Richard Gilbert Scott's second church, and the first he built entirely to his own designs and to a central plan. Richard Gilbert Scott was educated at Harrow, Charterhouse School, Bartlett School of Architecture London University, and Regent Street Polytechnic School of Architecture. Two further churches by him are also listed: The C of E church of St Mark, Biggin Hill, Kent (1957-9) and the Roman Catholic church of St Thomas More, Sheldon, Birmingham, also with windows by John Chrestien (1968-9). The architectural drawings for the Church of Our Lady Help of Christians are held by the RIBA/VandA (who hold the archive of Sir Giles Gilbert Scott, Son and Partner).

The Roman Catholic church of Our Lady Help of Christians, of 1966-7 by Richard Gilbert Scott of Giles Scott, Son and Partner with coloured glass windows by John Chrestien, is listed at Grade II* for the following principle reasons:
* Architectural interest: it is a particularly good example of a 1960s church displaying an innovative design successfully integrating architecture, engineering and art;
* Historic interest: it is a particularly important example of a post-Vatican II church that reflects the subsequent liturgical changes, both in its design and plan form, and reflects the growing Roman Catholic community in the Midlands during the post-war period;
* Quality of fixtures and fittings: it contains bespoke fixtures and fittings of a very good quality, especially the coloured glass windows by John Chrestien, a rare and particularly fine example of his work in England.