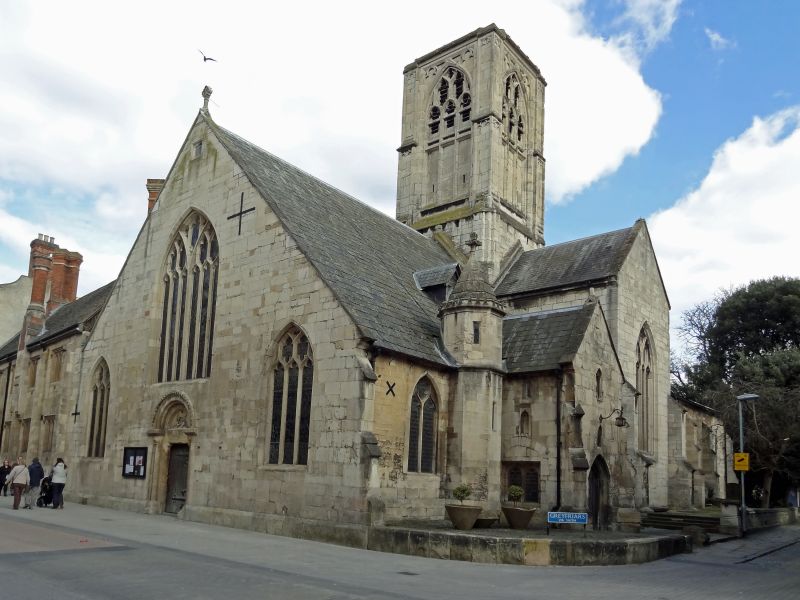 Parish church. First recorded c1140. Mainly C14, late C15 and
early C16 incorporating some C12 and C13 structure and
features. Extensive restoration, 1844-5, by S. W. Daukes and J. R.
Hamilton, further restoration in 1866, 1876, 1903, and 1908
when the tower battlements and pinnacles were removed as
unsafe. Ashlar, dressed stone in courses, slate roofs.
PLAN: cruciform; with aisled nave of three bays, south porch,
crossing with tall central tower, transepts of one-bay, and
chancel of three bays with slightly shorter north and south
chapels, a crypt below the west end of the nave and vaults
below the chancel.

EXTERIOR: the west front facing street has a steeply pitched
gable-end wall to nave and aisles, a renewed or re-cut
central, semicircular arched doorway, C12 but mostly renewed
or re-cut in C19, with nook-shafts and moulded arch with
billet hoodmould enclosing a tympanum carved with Agnus Dei in
bas-relief above a lintel carved with diaper; above the
doorway a large, inserted, late C14, six-light window with
foiled panel tracery; on each side, lighting the aisles, a
late C14 three-light window with similar tracery; coped gable
with cross at the apex.
On the south side of nave is C14, two-storey, end-gabled porch
with diagonal corner buttresses with offsets, arched doorway,
and a single-light window above to the upper room; in the
re-entrant angle with the nave on the west side of the porch
an octagonal stair turret with a moulded string course at nave
eaves level, a crenellated cornice and capped by a stone spire
surmounted by a foliated finial; in the gable-end of each
transept is a tall, C14, four-light window with foiled panel
tracery.
C14 central tower of two stages with slightly projecting,
panelled corner buttresses; on each face of the tower a full-height three-light window divided at mid-height by a transom,
with infilled panels below the transom and open tracery panels
above to the belfry stage; crowning moulding formerly
surmounted by crenellated parapets with tracery panels and
pinnacles.
The chancel: a clerestory window to each bay and flanking
the east gable-end wall diagonal corner buttresses with three
offsets each surmounted by a pinnacle with gablets and a
crocketed spirelet; in the east wall a very tall C15
four-light window with Perpendicular tracery and hoodmould; in
the apex of the gable above the window a niche and a cross on
the apex. Set back from the east gable wall on both sides, the
chapels, each of two bays, with lean-to roofs flanking the
chancel; in the short projection of the chancel on each side a
two-light window with a central transom and foiled lights;
diagonal buttresses with two offsets at the corners of the
chapels and in the east wall of each chapel an early C14
four-light window with reticulated tracery in the south chapel
and a C15 window with Perpendicular tracery in the north
chapel.

INTERIOR: C13 semicircular west responds to the nave arcades
with moulded capitals and water-holding bases, otherwise the
arcades, with slender cruciform chamfered piers, rebuilt in
late C14; in the porch a ribbed vault; above the crossing a
stone lierne vault; in the chancel late C14 arcades with
clerestory added in early C15; in both arcades the western
piers rise from the crowns of the ogee arches over the
doorways set in the stone; arcaded screens separate the
chancel from the chapels and in early C20 similar screens
inserted at the west end of both chapels.
In the east bay of the chancel on the south side a triple
sedilia and a piscina, and in the east bay on the north side a
single sedilia and an Easter sepulchre, all with elaborate
ogee canopies set against panels of niches with canopies and
with crowning string courses on both sides which continue to
the east and form central transoms in the two-light windows in
the east sides of the eastern bays.
On the east wall on each side of the altar a restored statue
niche with an elaborate polygonal, gabled and crested canopy;
the reredos installed 1889 is a triple arcade of carved Caen
stone arcade with gablets and crocketed pinnacles enclosing
panels of Venetian mosaic with figures of Christ and apostles;
in the altar a medieval stone mensa was replaced during
restoration of 1844-5; on the wall surfaces vestiges of early
C16 wall paintings.
Above the chancel the early C16 timber roof has carved wooden
bosses and angels playing musical instruments; in the south
chapel a C15 piscina, refitted c1930, with panelling by H
Stratton Davis, as a memorial to Robart Raikes; timber boarded
roofs above both chapels.
STAINED GLASS: includes the east window and a south window in
the south chapel by Rogers of Worcester, c1857: and in the
chancel the east window, said to be a copy of the medieval
glass in Drayton Beauchamp church, Buckinghamshire.
FITTINGS: include early to mid C16 pulpit carved with
renaissance ornament and a sounding board; C17 communion table
in south transept, early C18 stone baluster form font, and
early C18 civic mace rest.

MONUMENTS: include in the south chapel a recessed wall tomb
reputed to be for Richard Manchester, d.1460, with an ogee
arch and Perpendicular panels; tomb chest with effigies
removed of Sir Thomas and Lady Bell, d.1567, with shields in
lozenges and a moulded top; wall monument to Dorothy Snell,
d.1746, by Peter Scheemakers, a mourning female figure with a
portrait medallion on which leans a weeping putto with
overturned cornucopia and torch; in the north chapel a Baroque
monument to Daniel Lysons, d.1681, with frontal kneeling
figure in a segmental-arched recess framed by barleysugar
columns supporting an entablature, with broken segmental
pediment enclosing an achievement of arms, by Reeve of
Gloucester; on a window sill the sculpted bust from a former
monument to Richard Lane, Mayor of Gloucester, d.1667; in the
north transept restored brasses to John and Joan Cooke,
d.1544, founders of the Crypt Grammar School; in the north
aisle brasses of William Henshawe, d.1519, and his two wives,
taken from St Michael's Church, Westgate Street, in 1959; late
C15 grave-slab with incised cross and inscription to Isabel
Pole, wife of a mayor of Gloucester.
The late perpendicular work is particularly fine, and its
patronage is attributed to Henry Dene, Prior of Llanthony from
1461 to 1501.

A fine example of a town church, prominent in views down
Southgate Street.