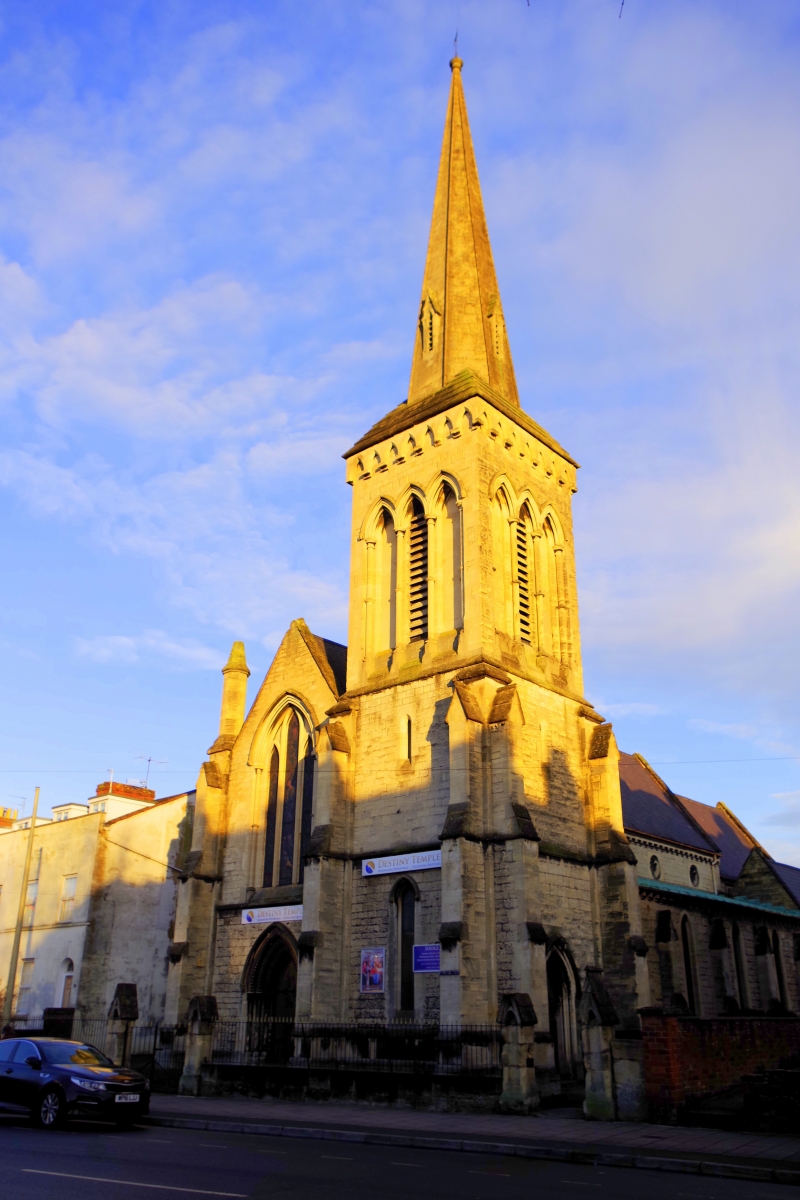 Parish church, 1846-7. In Early English Gothic style by Francis Niblett for the Diocesan Church Building Association; altered in 1863-4 and 1888-90, the latter by R W Drew.

Parish church, 1846-7. In Early English Gothic style by Francis Niblett for the Diocesan Church Building Association; altered in 1863-4 and 1888-90, the latter by R W Drew.

MATERIALS: it is built of snecked freestone with ashlar dressings under slate roofs; those to the aisles are clad in sheeting, with a stone spire.

PLAN: it consists of a five-bay nave with wide aisles which stop one bay short of the west end, a south-west tower and spire, and a three-bay chancel with south chapel and north vestry and organ chamber.

EXTERIOR: the west front facing onto Kingsholm Road consists of three parts: the aisle on the north, the gabled nave, and the tower on the south side. The aisle has gabled buttresses set back from the angle and a two-light Geometrical window with a quatrefoil in plate tracery and a hoodmould. The nave has a pointed doorway with shafts at each side and a moulded arch with a hoodmould. Above the stringcourse is a tall window of three lancet lights, the middle light broader and taller than the flanking pair. The window is framed by nook shafts and a moulded arch and a hoodmould. At the north-west angle of the nave, which projects forwards of the aisle, are set-back gabled buttresses between the tops of which rises a plain octagonal pinnacle. The tower also breaks forwards and its three stages are each defined by a string course. The two lower stages have buttresses setback at the top of the first stage, and gablets below the offsets at the top of the second stage. The lower stage has a tall lancet in the west wall and a doorway in the south wall which forms the principal entrance to the building. The middle stage has a small lancet in each of the exposed faces. Each face of the top stage is arcaded with ringed shafts carrying the moulded arches. The outer arcades are blind and there is a central light with timber louvre. There is an arcaded corbel table below the splay-footed spire, and a gabled lucarne on each cardinal face of the spire. At the apex is a weathercock.

The north and south walls of the aisles have plain lancets in each bay, except for the westernmost on the north elevation, where there is a second doorway. The bays are marked by gabled buttresses. There is a clerestory with quatrefoil openings to each bay and an arcaded corbel table above. The north wall of the chancel is abutted by the vestry and organ chamber, both with gabled roofs running northwards at right-angles to the main body of the church. The east wall of the vestry has small lancet windows, arranged as a single light and two pairs of lights, and a doorway, and the organ chamber has a window in the north gable to the same design as the west window of the north aisle. Set high in the east wall of the chancel are three stepped lancets under a continuous hoodmould, and a quatrefoil to the apex of the gable. On the south side of the chancel is a parallel, gabled chapel. It has a doorway and two pairs of lancets with trefoiled heads in the south wall and a two-light window in the east wall.

INTERIOR: the walls are plastered with exposed stone dressings, and the windows have plain, plastered reveals. The nave arcades comprise eight circular and four octagonal piers (not alternating) with boldly moulded octagonal capitals and bases, and double-chamfered arches with hoodmoulds. There are arched embrasures to the clerestory windows, and between the windows are stone corbels which carry the arch-braced principals of the open timber roof. At the east end of each aisle is an arch, that on the north side has a two-light unglazed window with stone tracery opening into the organ chamber, while that on the south opens onto the south chapel. The two-bay arcade between the chapel and the chancel has an oak screen with ogee-headed cusped lights. The chancel arch is pointed and moulded, with plain abaci and corbelled shafts with moulded caps. Within the arch is a carved rood designed by John Coates Carter, installed in 1921. The chancel is two steps above the level of the nave, closed by a low oak screen and iron gates erected in 1898, and its floor is carpeted. The altar is set high on several steps paved with red and buff patterned tiles; the walls are oak panelled, installed in 1927, with a trefoiled arch on the north side framing the aumbry. The roof has moulded arch-braces carried on corbels carved with King and Bishop heads, the east bay enriched with carved tracery and colour.

FITTINGS: include an oak hexagonal PULPIT with carved tracery to each face and a stone base, and a tripartite oak REREDOS with panels of brocade to the chancel, all of c 1890. The octagonal FONT of Painswick stone, donated by Niblett in 1848, has projecting heads of a king, queen, prince, and princess to the stem and an oak cover with an iron cross. It has been moved to the west end of the south chapel. The pipe ORGAN was built by Hill & Son in 1907; its stencilled case may be by C E Kempe & Co. The south chapel has an early-C20 oak chest ALTAR.

STAINED GLASS: the church has a varied collection including: east window dated 1895 by CE Kempe; south chapel east window of c 1865, restored 1977, possibly by Heaton Butler & Bayne, and the west window in the nave has seven scenes from the life of Moses, c 1870, by William Holland & sons of Warwick. The aisle windows depict various saints: two in the north aisle of c 1920 by George G Hunt, two in the south aisle, 1902-5, by Burlison & Grylls, one each in the western bays by E R Payne, 1948, and Leonard Walker (and Assistants), 1947. The west window in the south aisle, of 1847 by Thomas Willement, has the only remaining glass of a set of windows designed for the church by him. One window has decorative floral motifs and panel marking the 100th anniversary of the church in 1947.

MEMORIALS: the tile mosaic World War One memorial of 1920 is by George G Hunt, and beneath this is a plain tablet World War Two memorial. A white marble tablet commemorates Sgt Thomas Durrent of the Gloucester Regiment, killed in France in 1916.

The site for the Church of St Mark was purchased for £300 by the Diocesan Church Building Association and the church itself was paid for by grants from church building funds and voluntary contributions. Construction begun in 1846 and the church was consecrated on 31st August 1847. It was designed by local architect Francis Niblett (1814-83). The stone was supplied from three quarries, including Hampton Common and Box, near Bath.

St Mark's was built to serve a densely populated and predominately poor district of Gloucester. The church was designed to hold 600 people (plus 200 children), all of the sittings to be entirely free. In 1869 the incumbent, Revd. W H Girdlestone, made the suggestion (innovative for its time) that the church should be open during the week for private prayer, a feature of the church that continued well into the C20.

The south chapel was rebuilt in 1863-4 and new floors, seating and a vestry were added in 1886-7. Restoration and alteration works were carried out by R W Drew of Torquay, a nephew and pupil of William Butterfield, in 1888-90, including the enlargement and heightening of the chancel. In 1900 the south chancel aisle was fitted out as a Lady Chapel; it was restored in 1977. Some re-ordering was carried out in the late C20 including the relocation of the font to the entrance to the Lady Chapel and the removal of some pews.

From the early 1880s until 1932 the vicarage was a villa on London Road, and from 1952 it was a house on Tewkesbury Road. St Mark's was declared redundant and was closed for worship on 3rd November 2006. It was then leased by the Pentecostal church, the Redeemed Christian Church of God, who remain (2014) in the building. In the early C21 the remaining pews and the brass lectern were removed.

The Church of St Mark of 1846-7 designed by Francis Niblett is listed at Grade II for the following principal reasons:
* Architectural interest: a successful and early example of the ecclesiological style, showing skill in its proportions and spatial qualities;
Architect: an early example of a complete new church by a well-renowned and prolific local architect;
* Interior: the high arch-braced nave roof combines with the tall chancel arch and wide aisles to give the internal space a strong vertical emphasis;
* Fittings: a good collection of stained glass by well-respected artists, which are illustrative of the evolution of glass design and styles during the second half of the C19.