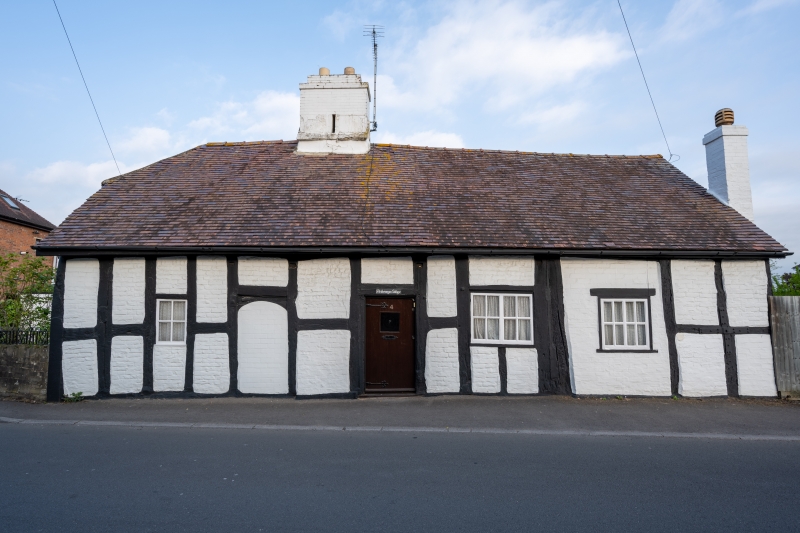 Cottage. Probably mid/late C16, in early C17 extended and
divided into 2 dwellings, in 1890 altered and converted to one
dwelling, C20 alterations. Timber box frame with large panels
infilled with brick painted white; plain tile roof half-hipped
at left end and gabled at right end; a central, axial, stone
stack with a pair of later brick shafts, the crease moulding
on the stack suggests roof originally thatched, a C19 brick
stack added against right hand gable-end wall.
PLAN: a lateral range of three rooms of which the right hand
and central rooms are the original house; both rooms heated by
back-to-back fireplaces in the axial stack which was possibly
inserted into a central smoke bay; to front of stack a lobby
with blocked doorway onto street; right-hand end room added in
C17 originally unheated, later converted to kitchen with added
fireplace; at rear a straight flight staircase.
EXTERIOR: single storey and attic; asymmetrical front, to left
of centre the blocked original entrance doorway with
segmental-arched head; in centre a later doorway with vertical
plank door; to left of doorways a single casement and to right
of doorways two double casements, all with glazing bars and
C20 renewals of originals; at left hand end of range an early
C20 canted bay window and in the half-gable above a C20 metal
casement; at right hand end a small projecting brick stack; at
rear a gabled dormer, C20 brick porch and C20 casements.
INTERIOR: in left hand room later exposed joists and a large
stone fireplace with the lintel removed; in the central room a
chamfered bridging beam with straight cut stops, broad
chamfered joists with diagonal stops and an ashlar fireplace
with chamfered jambs and lintel with circles incised on the
face of the lintel, the right-hand wall has a deeply chamfered
rail and a jowelled post at rear; the small right-hand room
has rough exposed joists and is partitioned at rear for
staircase and bathroom; in the roof very large purlins; the
principal rafter in the putative smoke-bay was cut short when
the stack was inserted and appears smoke-blackened.
An early example of the lobby-entrance plan for this area.