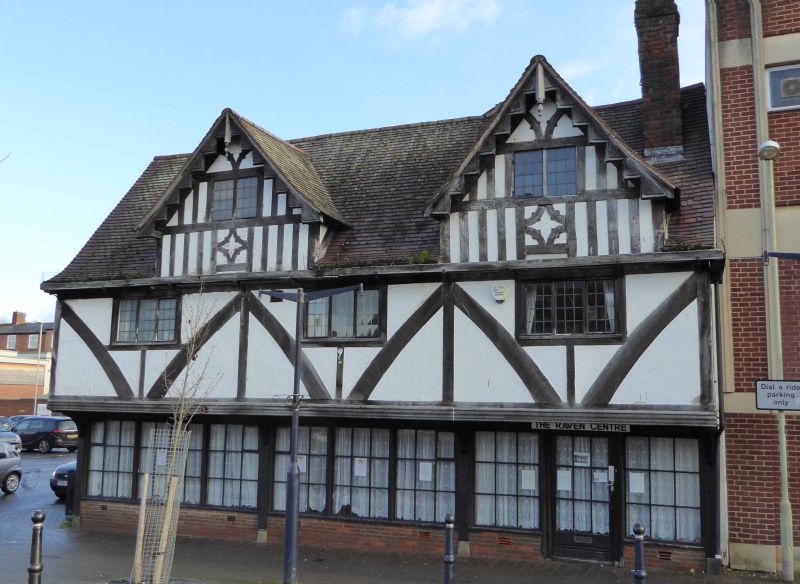 Formerly known as: The Old Raven Tavern HARE LANE.
Merchant's house, now old peoples centre. c1520 with late C16
additions and alterations; from the later C17 a tavern;
extensively restored with some alterations for trustees of the
Raven Fund by HF Trew, with support from the Society for the
Protection of Ancient Buildings, c1950; altered 1964 for use
as old people's centre, later single storey extensions in yard
at rear. Timber frame with rendered infill panels, tiled roof
with two large cross-gabled dormers, brick stack. Front range
and one-bay of the former long rear wing to right, large brick
stack between the front range and the wing.
EXTERIOR: two storeys and attic; the front range of three
structural bays, the left-hand bay largely rebuilt and in the
front on the ground floor large windows with glazing bars
inserted c1950 between the bay posts with entrance doorway in
the framing of right hand window; at first-floor level a
continuous jetty supported on knee brackets off the posts;
above the bressumer a pair of massive, slightly curved tension
braces in each bay with a three-light leadlight casement
inserted c1950 in the centre of each bay between the braces
replacing a C18 sash; two gabled dormers added in the late
C16, the fronts with close studding and a central quatrefoil
below the middle rail, above the middle rail a three-light
leadlight casement and in the apex of each gable a quatrefoil
panel; the barge boards are cut in a stepped pattern with a
drop finial at each apex; the left-hand dormer was rebuilt
c1950.
INTERIOR: mostly refitted c1950 including staircase to first
floor, on the first floor some exposed framing and bridging
beams with stopped chamfers.
HISTORY: the house is popularly associated with the Hoare
family. Wrongly called the Raven Tavern; the Raven actually
stood in Southgate Street.