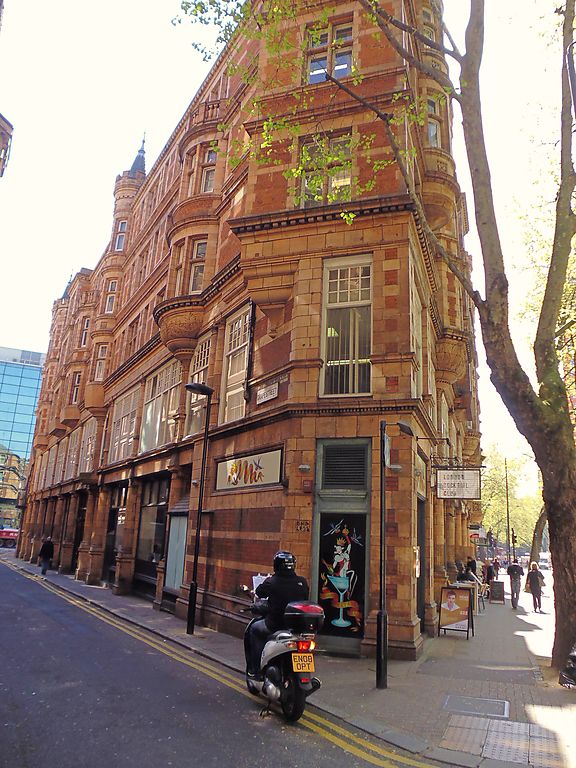 Brick with exuberant terracotta dressings and decorations, slate roofs with high stacks dressed in terracotta. Angled plan of two intersecting ranges with central courtyard serving flats reached under No.210 Shaftesbury Avenue.
EXTERIOR: five storeys and attics. Profoundly asymmetrical composition. Angled two-bay range with projecting two-storey oriel adjoins Shaftesbury Theatre (qv), then thirteen-window range to Shaftesbury Avenue. Corner bartizans with projecting turrets, that and its adjoining bay to Grape Street with machicolations, as has a similar turret to right of centre of main composition and two three-storey oriels. These and oriel set over entrance to chambers at right of composition are all mounted on fat columns set between shopfronts and first-floor former showrooms, and with undersides embellished with organic decoration. The other shops separated by fluted Roman Doric engaged columns with dentil cornice, over which are first-floor former showrooms separated by engaged Ionic columns. The shopfronts largely renewed in sympathetic fashion: that to No. 218 may be original; first-floor showrooms, now offices, with large plate glass windows under small-paned toplights, little altered. All windows to upper floors mullion and transom casements in terracotta surrounds, with notched lintels linked as bands across composition, and with many projecting bands, moulded cornice and parapets. Attic dormers inserted mid-C20 and not of interest. Balcony over entrance to offices.
Return to Grape Street (King Edward Mansions) similarly treated though with higher stacks, with broad, square bartizan on corner, a round one in the middle and one of each at far end, all with machicolations. Three oriels inbetween, one round on moulded plinth, one canted (both with balustraded tops) and one square which rises to the line of a heavy modillion cornice. Shop fronts to ground floor, some with cast-iron grilles, have simple mouldings and tripartite toplights. First floor former showrooms with small top lights in broad mullion and transom casements. Flats served by courtyard to rear of No. 210 Shaftesbury Avenue, with stone access balconies on cast-iron brackets, sash windows and part-glazed doors.

Included primarily for the quality of its street facades, an exceptionally powerful example of Doll's work for the Bedford Estate using fine terracotta.