Remains of the Church of the Greyfriars 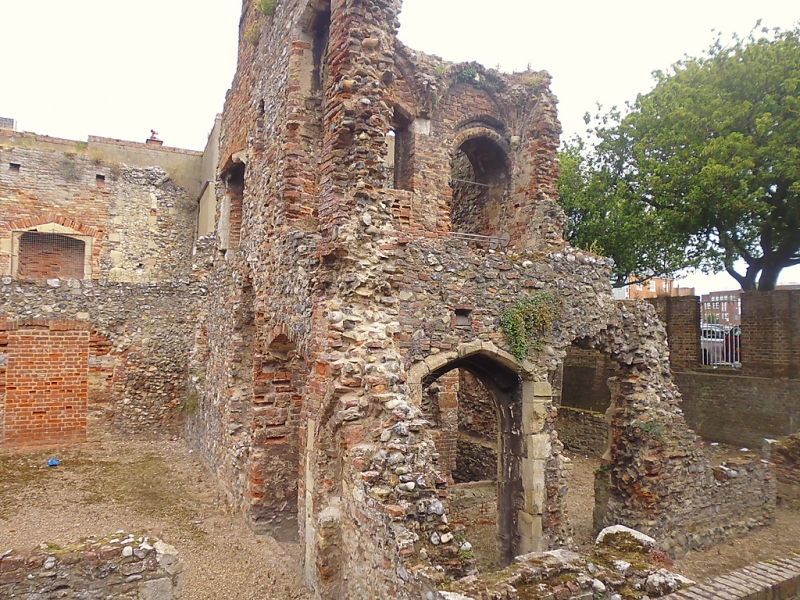 Entry Name: Remains of the Church of the Greyfriars

Ruins of the monastic church of the Franciscans comprising the
west range of the cloisters and fragments of the south wall of
the church. Founded c1226, enlarged 1285 and 1290, dissolved
1538. Present fragments of cloister early C14. Brick with
ashlar dressings and some flint.
4 bays of the west walk of the cloister remain of which 2 have
full vaulting: quadripartite rib vaults with longitudinal and
transverse ribs and subsidiary tierceron ribs, all meeting at
head bosses. The ribs drop to triple clustered colonnettes
with mushroom capitals. The cloister internal windows are
arched and separated by stepped side buttresses. 3 doorways
opened from the cloister to the west: north one blocked and
robbed, the middle one has a double wave-moulded arch (i.e. an
addition of post 1320-30), the south one has a hollow
chamfered arch. Abutting the west of the cloister are
fragments of a 2-storey apartment with the remains of the
springers of brick tierceron vaults at the upper level. West
of this are remains of a house added after 1538. The south
wall of the church has a prominent C16 fireplace to the first
floor with an ashlar surround, and west of this is a 2 plus
4-light mullioned window with an acanthus console to the king
mullion looking into a small yard to its west. In the church
south wall a door leads to an excavated room containing 2
cusped and sub-cusped mid C14 wall tombs with ogee heads and
remains of painting: standing and kneeling female figures
under painted tracery. A third tomb was set to the east.
Scheduled Ancient Monument.