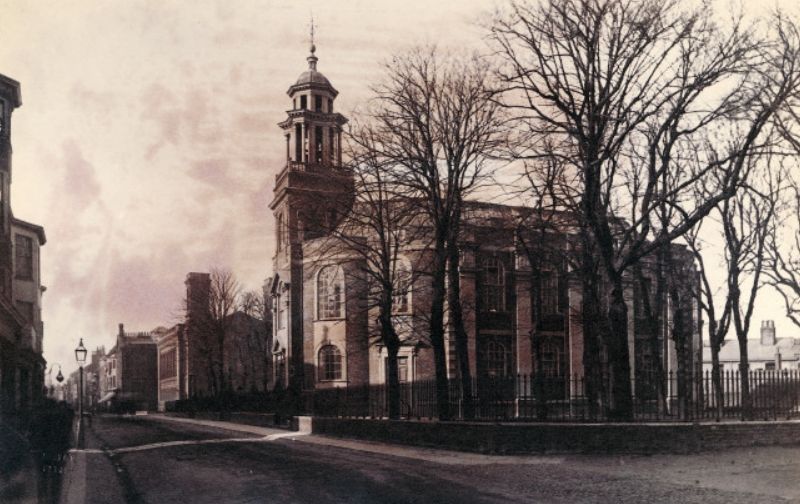 Church, now theatre. Built 1714 as a chapel of ease to St
Nicholas by John Price of Wandsworth. Redundant in 1959,
restored 1974 and opened as a theatre 1979. The ground plan is
based on St Clement Danes, London. Red brick with ashlar
dressings on a stone plinth course. The brick is laid in
Flemish bond but is of header bond in the quadrants. Copper
roof.
EXTERIOR: 2 storeys; 4-window range. The north and south sides
are of 4 bays each, with giant pilasters supporting a Doric
block entablature below a rebuilt parapet. 8/8 lower sashes
and 12/12 upper ones, all round-headed. There is one
6-panelled door to each front, requiring the shortening of one
window. The east and west ends are joined to the sides by
means of double quadrants, each of which has a pair of sashes
as before set within a broad ashlar band. One quadrant bay on
north and south sides has a pedimented doorway. The church is
entered from the west through a double-leaf door under a
pediment. Pilasters rise up either side to a broken pediment
containing a round-headed sash with glazing bars. Above the
parapet is a tower of square section lit through a small sash
to the west and with a clock face under a pediment to the
north and south. There is a low open balustrade and then an
open cupola with paired columns to the projections. On top of
this is a polygonal lantern under an ogeed dome. Ball finial
and weathervane. The east end has the same double quadrants as
the west except they do not have doorways. The upper east
window is the only one to retain C18 glazing bars, though not
of 1718. The east end has a pair of giant Corinthian pilasters
supporting an open pediment on block entablatures. Panelled
door with an arched overlight. The roof is low and hipped.
INTERIOR: the entrance narthex has a staircase right and left:
turned balusters, ramped and wreathed moulded handrail, open
string. The interior was formerly of 6 bays of panelled timber
piers supporting a gallery. On the gallery were 6 Doric
columns rising to a barrel-vaulted ceiling with subsidiary
domes at the east end. These elements remain, but the lower

pier panelling and the plaster vault has gone, leaving the
roof timbers exposed. Roof of principal studs, curved tension
braces to the upper wall plate and flat purlins. The
barrel-vault formers remain. The east and west ends have a
pair of Corinthian upper columns. The north side under the
gallery has been partly partitioned off as a bar and the south
side has been partitioned off to provide for changing rooms
and other offices. The furnishings have been moved to the
Church of St Nicholas (qv).