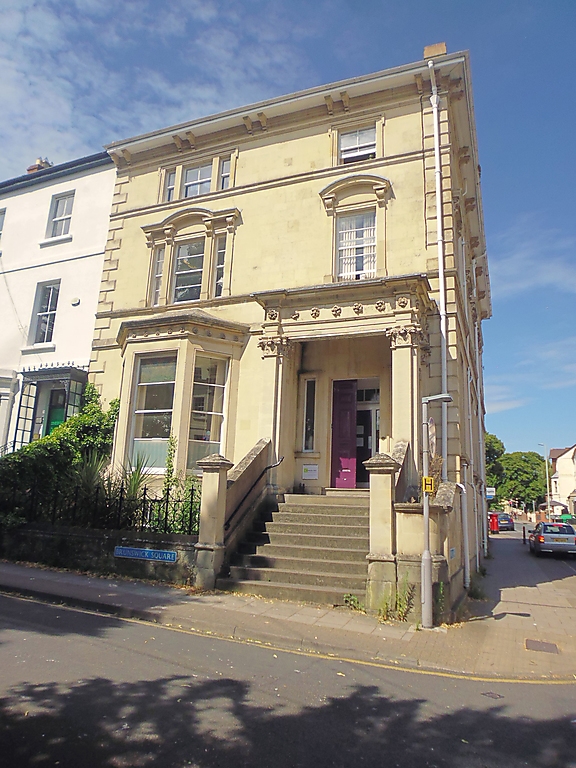 House, now flats. c1860. Brick, faced in ashlar on front and
on the east side facing Brunswick Road, hipped slate roof with
boxed eaves, ashlar stacks. Italianate style. A large
rectangular block set back behind front area.
EXTERIOR: three storeys and full basement. On the front and
east elevations a raised band at first-floor level, a moulded
string at first-floor sill level, and a moulded band at
second-floor sill level; on all sides a crowning, ashlar,
frieze band with pairs of shaped brackets supporting the
eaves; at the corners of the block raised and chamfered
quoins; the front of two asymmetrical bays, on the ground
floor to right, a projecting, single storey entrance porch
approached by a long flight of stone steps, the opening to
porch flanked by antae and with a crowning entablature to
front and sides with paterae on the frieze, to left of porch a
canted bay window to basement and ground floor with crowning
cornice and sashes to both floors in each face; on the first
floor to right, a sash in opening with architrave frame and a
floating, open segmental pediment supported on consoles;
further to right a tripartite window with sashes framed by
pilasters and a floating cornice supported on consoles above
each side sash and an open segmental pediment above the wide
central sash; on the low second floor a single sash to right
and a tri-partite sash to left in openings with eared
architrave frames.
On the east side facing Brunswsick Road plain irregular
openings to the basement; on the ground floor five sashes in
irregularly spaced openings, all with architrave frames and
moulded sills supported on shaped brackets; on the first-floor
sashes spaced at intervals to ground floor but the central
window of two lights with sashes, all in architrave frames
with floating cornices supported on consoles; on the second
floor short sashes spaced at same intervals as floor below in
openings with eared architrave frames.
On brick garden front at rear an ashlar, canted bay window to
basement and ground floor, with crowning entablature and
blocking course; on the ground floor a pair of French doors
with fanlight and a narrow sash in each canted side, to left

of the bay a single sash and on the first floor two sashes,
all in openings with flat arched heads of five
raised-and-stepped stone voussoirs and projecting stone sills;
on the second floor two casements with glazing bars. Generally
on all elevations the sashes on the ground and first floors
have a single horizontal glazing bar in each sash frame,
sashes on the second floor on the front and sides have
central, vertical glazing bars.
INTERIOR: not inspected.
SUBSIDIARY FEATURES: on the street front the basement area
fence to left has an ashlar plinth below a decorative
wrought-iron railing set between tall, square, ashlar piers;
to right a third pier flanking the entrance steps, all the
piers with moulded bases and caps.