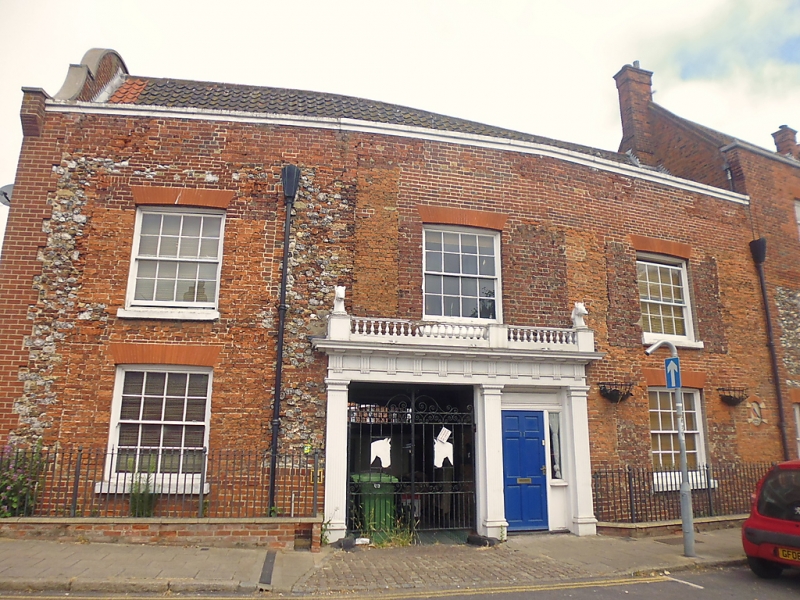 Public house in 2 distinct builds. Early and mid C18 with
subsequent alterations and renovations. Red brick and flint
under pantiled roofs.
EXTERIOR: No.12 is in 2 storeys and 3-window range having been
truncated in late C20. Slightly curved facade. Central
passageway to rear yard has a timber facade added in later
C19: 3 fluted pilasters supporting a metope frieze under a
mutulated cornice on which stands a low balustraded parapet.
The pilasters frame a pair of iron gates and a fixed window.
Right and left is an 8/8 sash window under finely-gauged
skewback arches fitted into reduced window openings made for
horizontal mullioned windows. 3 similar windows to the first
floor, also in reduced openings. Low parapet below the gabled
roof. Internal gable-end stack to north. The south return
rebuilt under a shaped gable in late C20. The rear has a
segmental relieving arch over the carriageway and there is a
storeroom door and a one-light window to the ground floor,
both late C20. Late C19 rear extension abuts to the north.
No.13 was added mid C18, is of 3 storeys in 2 bays and is
separated by a butt join from No.12. The ground floor and
first floor with a combined timber door and window case
extending through 2 storeys and rebuilt mid C20: metope frieze
to the ground floor and a broken pediment over the 6/6
first-floor sash. One 6/6 recessed sash each floor left, with
an additional narrow 2/2 sash to the left at the ground floor,
and two 3/3 segmental sashes to the second floor. Low parapet
with a gabled roof. Internal gable-end stack to north. There
is a parallel rear block of the C19: red brick, gabled
pantiled roof, sash windows.
INTERIOR: not inspected.