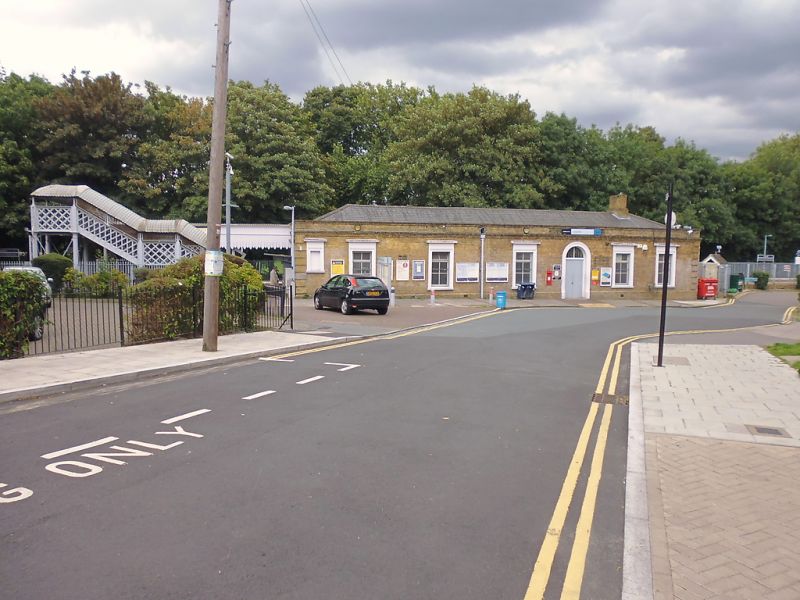 Railway station, with a main (upside) building, a subsidiary (downside) building and a footbridge. 1857, extended c1880, for the South Eastern Railway. Yellow slock brick with rendered dressings and a slate roof. Single storey single depth buildings with platform canopies. The street elevation has six unequal bays of which the left hand two are the extension of c1880. The fourth bay from the left is the entrance door, the others have windows. The openings have moulded architraves, the windows with flat corniced heads, the door with an arched head. Moulded brick quoins to the original build. Parapet with moulded brick string, low pitched hipped slate roof behind and chimney stack at right hand end (it originally had three, one at each end of the ridge of the original building and one to the extension). The platform elevation is similar but with door: window: door:window:window:door :window, again the arched doorway is to the booking hall, the others to waiting rooms. Timber canopy on square timber posts, saw tooth valance, all complete. Covered wrought iron lattice girder footbridge. Shelter on down platform has plain brick walls to the waiting room and a hipped roof. Three bay platform canopy as before. History: Opened in 1857 for the Mid Kent and north west kent Railway, taken over by the South eastern railway in 1864. The building was extended in c1880 and the canopies, footbridge and down platform shelter probably date from then. It is a good example of a South Eastern Railway station of the 1850s which was extended sensitively in c1880 and has been little altered since.