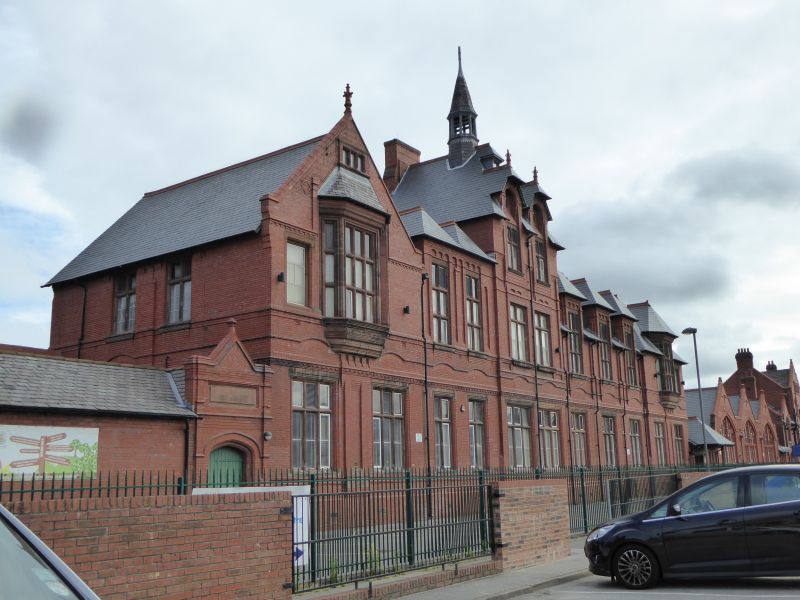 School, formerly Board School. 1883-91, with C20 alterations and extensions. By Edmund Kirby, architect, and constructed by Joshua Henshaw and Sons, builders, both of Liverpool. Built for the Walton -On-The -Hill School Board. Red Ruabon and brown brickwork, with cut and moulded brick, ashlar sandstone and terracotta dressings and detailing, coped gables, tall brick chimneys with corbelled caps and Welsh slate roof coverings.

PLAN: The school has developed on a triangular site between Arnot Street and the cutting for the former London and North-Western Railway. The principal ranges, developed in several closely-spaced phases along almost the full length of Arnot Street, with wings extending northwards enclosing three yard/playground areas.

EXTERIOR: ARNOT STREET ELEVATION: Phase development aligned east west, with long single storeyed link to former school board office at west end of street, and incorporating arched entrance below gablet at east end. To its right, the principal 11-bay range of two and three storeys , arranged 2:2:2:3:2, the central bays 5 and 6 of three storeys, with a hipped roof end carrying twin attic dormers which extend through the eaves. Behind these rises a tall fleche or bell-tower. A west end gable and and east end hipped gable both incorporate canted oriels with mullioned and transomed lights. To either side of the 3-storey bays are tall hipped dormers which extend through the eaves, a pair to the west and three separate windows to the east. 2 and 3-light windows to all levels of mullion and transom form, with moulded brick strings to heads and cills. Further east, a short single-storey link leads to a single storey, triple gabled central range of 1891,each gable with a wide 7-light transomed window beneath a shallow pointed arch, each light with a segmental- arched head. Terracotta hood moulds to arches, and above, raised diaper work to gable apexes, and to upper parts of walling between gables. A further low linking range connects with the main entrance contained within a 2-storey range, formerly the headmasters office, of two bays, with a gablet to the left, incorporating a 3-light transomed window above a shallow pointed- doorway with a planked door. To the right, a 2-storeyed, 11-bay east range with wide gables to each end, and shallow pilasters defining the bays. Shallow segmental arched window openings throughout, with stone cills on moulded brick strings, and with moulded brick storey band. Tall pointed arch to entrance at east end. Gable apexes with blind triple lights.

INTERIORS: Interior spaces throughout the school have been incrementally altered, but much original fabric remains as evidence of original functions of different parts of the complex, including staircases, hearths and ceiling beams to carry moveable partitions by means of which classrooms could be sub-divided or enlarged according to need.

HISTORY: The complex of buildings at Arnot Street is one of the largest surviving examples of Board school provision in Liverpool. The original plans for the site show separate provision for boys and girls, and what appears to be a creche facility adjacent to a sewing classroom and cloakroom for girl pupils. The school appears to have been the principal site of the Walton Board, being also the location of the Board's office building at the west end of Arnott Street.
Forms a group with Rainbow House, formerly the Walton-On-The-Hill School Board Office (item 4/10158).

An architecturally distinguished and spatially complex Board School developed between 1883 and 1891. Designed by one of Liverpool's most important C19 architects, and one of the largest surviving Board Schools in the city, the Arnot Street School demonstrates the very high quality of the school buildings provided for Liverpool's rapidly-expanding population in the late C19.