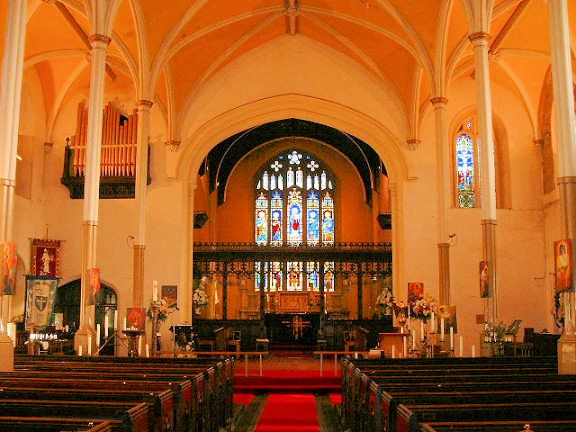 Church. 1814-15, enlarged 1844 and chancel added 1880.
Sandstone ashlar (roof concealed). Gothick style. Nave with
north and south aisles, west tower flanked by stair-turrets,
chancel. The tower, divided into 2 stages by a mid-level band
of blank arcading, has polygonal corner turrets with embattled
tops and an embattled parapet; a moulded 2-centred arched west
doorway with hoodmould and recessed door, a 2-centred arched
2-light west window with tracery, and at the upper level a
small square-headed belfry window in each side with 2 arched
louvred lights and a clockface immediately above with
drip-band arched over. The flanking stair-turrets are
2-storeyed with chamfered corners, 1st floor bands, embattled
parapets, and 2 traceried single-light windows to the upper
level. The side walls are buttressed and have 2 tiers of
4-centred arched 2-light windows, those in the upper tier
taller, all with hoodmoulds. Chancel has 5-light east window
with transom and Perpendicular tracery. Interior: narthex
(enlarged in 1960s); galleries on 3 sides carried on cast-iron
columns (north and south galleries shortened at east end).