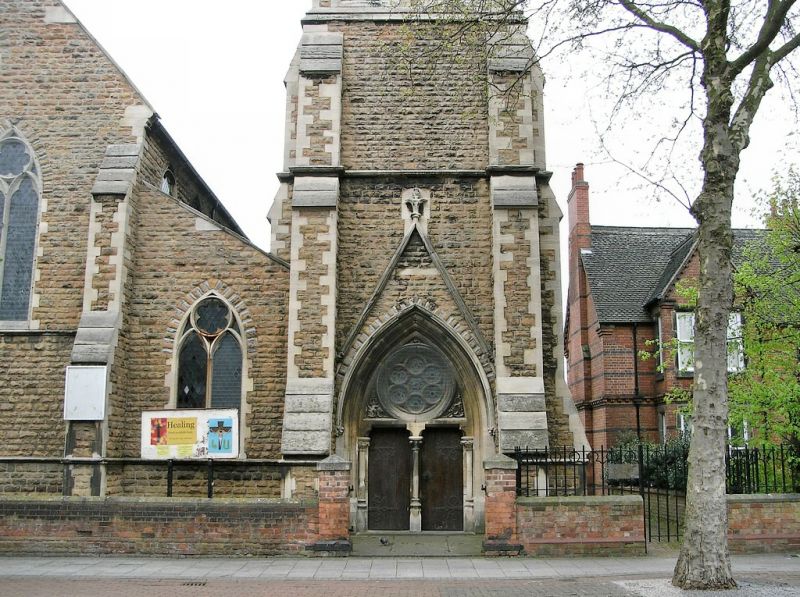 Parish church. 1863-64. By RC Sutton of Nottingham. Spire
rebuilt, 1955. Rockfaced stone with ashlar dressings and slate
roofs. Gothic Revival Style.
PLAN: chancel, vestry, nave with aisles, south-west tower and
spire.
EXTERIOR: plinth, string course, buttresses, coped gables.
Pointed arched windows, mainly 2-lights, with geometrical
tracery. Chancel, single bay, has a 5-light east window, and a
single window each side. Vestry, to north-east, has a single
window.
Nave clerestory has on each side 10 round windows in spherical
triangles. West end has 2 windows, with a central round window
above. Aisles have 4 windows and single windows in west ends.
North aisle has to west a pointed arched doorway under a coped
gable. South-west tower, 3 stages, has a slated broach spire
with a tier of lucarnes. To west, a pointed arched recess
under a gable, containing a pair of doors with a central
shaft, and above them, a traceried round window. Bell stage
has quoins. On each side, 2 segment-arched recesses with
single pointed arched bell openings.
INTERIOR: chancel has moulded arch with blue brick band and
hood mould, and responds. Arch braced roof on corbels. East
end has traceried panelling and reredos, 1913, and stained
glass window, 1904. North side has arch with organ case, south
side has doorway. Nave has 5 bay arcades with round piers and
chamfered arches with polychrome brick bands and hood moulds.
Hammer beam roof with shaft corbels. Blind arcade at west end,
with commandment boards. Aisles have lean-to roofs, pointed
arches at east end, doors to west, and patterned stained glass
windows, 1896. South-east window c1864.
Fittings include original stalls, desks, benches, communion
rail, round ashlar pulpit and octagonal font with spire cover.
Brass eagle lectern, 1880. Memorials include 3-panel alabaster
war memorial, 1921.
(The Buildings of England: Pevsner N: Nottinghamshire: London:
1979-: 247; St Saviours centenary booklet: Rev. RG Hoye:
Nottingham: 1964-).