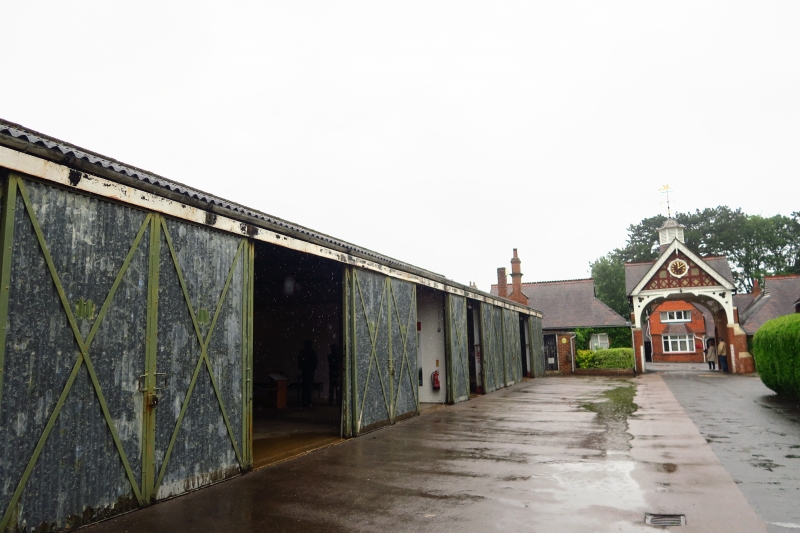 GV
II
The south side of the stable yard consists of the gateway, flanked by single storey ranges to the east and west, that to the west originally slightly detached, each having a half-hipped roof and forming the south return of the west stable range (q.v.). Built in c.1883-88 for H.S Leon following his purchase of the property in 1883, as a store for apples, pears and plums produced on the estate. Altered and extended by Edward Swinfen Harris in c.1890. Converted in 1938-39 to provide accommodation for Government Code and Cypher School (CG&CS) by Hubert Faulkner, a local builder.

PLAN: a long range, aligned east-west and enclosing the south side of the stable yard; it adjoins the south end of the west range, now The Bungalow and attached stables range (qv).

EXTERIOR: One and a half storeys. The gatehouse, which faces across the rear of Bletchley Park (qv), is built of timber, raised on four-in brick pilasters on flanking walls, the posts rising from stone pads, and having trefoil-pierced arched braces to a high horizontal lintel each side. Boarded soffit with access trap for a vertical iron stair. The superstructure containing the clock mechanism is gabled on the north and south faces. Framed with square panel decorative framing, and having pebbledashed infill. Two keyed bronze clocks face the yard and rear of the house. Bargeboards carved with stepped arcading rise to meet at a dropped pendant. Plain tile roof with crested ridge tiles. Two smaller gables of similar construction face east and west over the linked buildings. At the centre of the roof, standing on a tiled octagonal base below ridge level, is an octagonal louvred belltower with a lead-covered ogee cap carrying a wind vane with a wyvern crest.

Running east from the gatehouse, a single storey range of eight bays with three single bay two-storey gables facing south, with deep bargeboarded eaves, plain Dreadnaught nib-tiled roof (probably dating from a re-roofing), half-hipped at the gatehouse end, with crested ridges. The first and third gables from the gatehouse originally had wide brick-arched openings and double doors for access to the fruit stores, now infilled. Two original two-light timber casement windows survive in the gables. Also a single door and various replaced paned timber windows on the ground floor. The eighth bay was apparently added in the late 1880s or early 1890s by E.S Harris, and has a door and windows in the gable end.

The yard elevation, facing north, has a high chamfered plinth, later rendered and colourwashed, and various replaced windows, with the added end bay returned by 1/2 bay under a hipped roof carried on four chamfered posts. This covers an entrance and window from the yard at the east end. Two small side windows with coloured leaded glass. Beyond the end gable, a short crenellated wall running east from the south face of the building has a two-centred gateway arch with a framed and panelled door with decorative ironwork on the south face.

West of the gatehouse. is a two-bay single-storey returned end of the west range of the former garage, the front now infilled with wire-cut Flettons when the building was converted to a dwelling for the site surveyor[ PW1]. Similar tiled roof half-hipped against the gatehouse. It appears to have been built independently of the gatehouse and linked later.

INTERIOR: The range east of the gatehouse is subdivided by plastered brick partitions, with a stud wall forming a corridor on the south side. Boarded floors. Two chimney stacks, with stepped tile, and brick fireplaces. The single purlin roof is on king-post trusses and intermediate studs above and below the collar.

HISTORICAL NOTE: during the Second World War, the section east of the gatehouse, known then as the 'bungalow' was re-partitioned to accommodate the [PW2] Enigma Attack section of CG&CS.

The group of buildings intimately associated with. and lying to the north of the listed Bletchley Park consists of two ranges of buildings forming the south and west side of the former stable yard, a row of three cottages. now forming the north side of the yard. and two estate buildings, now private dwelling houses known as The Bungalow and Fenella (not included), continuing the west range further to the north beyond the north gate. The range of eight loose boxes enclosing the stable yard on the east was demolished in 1937.

Bletchley Park is the successor to Water Hall, a fine mansion built in 1711 by the eminent historian Dr Browne Willis. co-founder of the Society of Antiquaries of London. on land purchased by his ancestor from the second Duke of Buckingham in 1694. The house was demolished in 1798 by Thomas Harrison. steward to Earl Spencer, the then owner. The estate was split up and was bought in 1865 by a descendent. Spencer Harrison, who sold it in 1870s to a Mr Coleman, who erected a new house, which now forms the rear part of the house now known as Bletchley Park. This was enlarged by a succeeding owner, Samuel Beckham in 1881 who had bought it with 430 acres. The estate however was again sold in 1883 to Herbert Samuel Leon. an eminent stockbroker. financier, company director, later a county councillor, liberal MP for North Division of Buckinghamshire (1891-1895), newspaper proprietor, successful farmer and a good friend of the Prime Minister David Lloyd George, who frequently stayed at the house. He was created baronet in 1911, and through his local interest and beneficence, the town benefited considerably. Sir Herbert considerably enlarged the house immediately following his purchase, adding an opulent new south front range. The identity of his architect is not known. He also developed ancillary accommodation to the north around a stable yard and his extensive nursery gardens, which included a walled garden and orchid houses. Further buildings on the estate, which at one time had about 200 staff, including the Lodge, built in 1886, Dauphin House (for M & E engineer) 1886. the Laundry 1888. Lodge and Pavilion on Buckingham Road. 1896-7, a house in School Lane, 1899 and the eight Noel Cottages on Church Green Road, of 1904. He died in 1926 and Lady Fanny Leon continued to live there and actively support the community until her death in 1938. The estate was then further split up and sold.

After March 1938. with the tensions in Europe rising fast following the Austrian Anschluss, the property. then vacant, was identified from a list of available properties by 'Commander' Alastair [PW3] Denniston of the Ministry of Works as a new dispersal location for the Foreign Office's Code and Cypher School, GC & CS, later renamed GCHQ. The first elements of the organisation, known flippantly as Capt. Ridley's Shooting Party', moved in in August 1939. The accommodation in the house was soon insufficient for the rapidly growing organisation, and personnel spilled over into all outbuildings, and a range of hastily erected prefabricated huts.

The organisation, under Rear-Admiral Sinclair, who was later referred to simply as 'C', was equipped with and developed the Enigma electro-mechanical deciphering machines originally designed in the 1920s. The enemy coded messages deciphered here by the 7,000-plus staff were greatly instrumental in the prosecution and successful outcome of the Second World War. The accommodation was soon expanded into a series of huts, a further expansion occurring in response to German expansion into the Balkans and North Africa. The Station was responsible for developing methods to penetrate up to 58 German Enigma codes, and to sift the intelligence, termed top secret ULTRA, for direct transmission to the Prime Minister, Whitehall and to operational field stations, the special liason Units. One of its most significant early successes was the interception of the German Knickebein beam guidance system in June 1940. later, it became the hub of the Battle of the Atlantic and was able to forewarn accurately the disposition of German defences prior to Operation Overlord. It also identified secret work at Peenemunde and forewarned the V-weapon attacks.