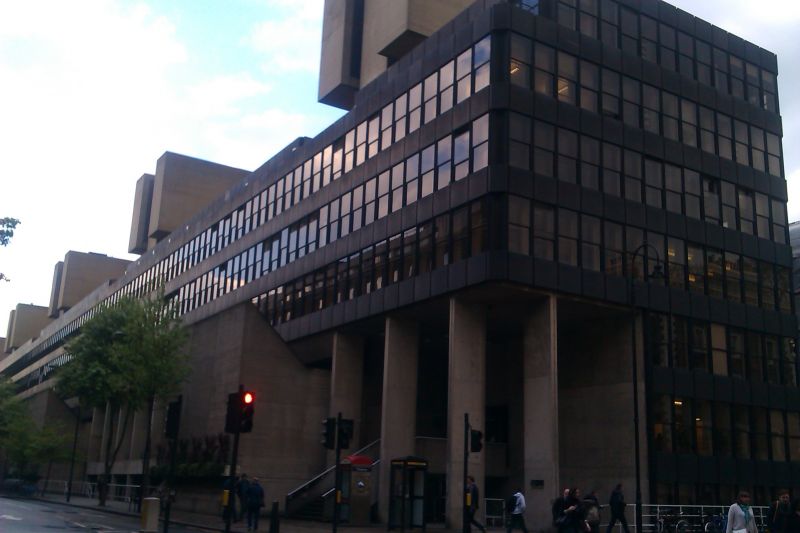 University teaching building, 1970-6 by Denys Lasdun and Partners, extended 1990-3, also by Sir Denys Lasdun and Partners. In situ reinforced concrete and precast mullions with a cladding of prefabricated bronze-anodised aluminium panels and window sections. In plan the building makes a strong barrier to the traffic of Bedford Way while extending the concept of flexible teaching space already explored at the University of East Anglia, Norwich. Six storeys above ground, with three basement storeys, in 1999 numbered 1-9. Flat, paved roof. Long spinal range, with wing to rear, and footings for a second incorporated in 1990-3 library extension. Large basement includes lecture theatre, the Logan Hall, under forecourt facing Lasdun's extension to the School of Oriental and African Studies opposite; conference facilities, students' union and service entrance. Split-level entrance hall gives on to library, drama studio and bookshop, with flexible teaching areas above, mainly facing street, and tutorial rooms, mainly facing courtyard and in wing.

The elevational treatment is in Lasdun's mature language of strata and towers, a grid of aluminium panels and glazing set over concrete plinth on western elevation, with massively over-scaled concrete staircase towers. On the eastern elevation to Bedford Way, the entrance floors are set back behind exposed frame, and has cut-back corners which demonstrate the smooth, sharp concrete particularly forcefully. The quality of finishes is exceptional, and the contrasting texture of materials unique in Lasdun's surviving work. The single spur that was built is highly sculptural, with a striking silhouette of angular concrete escape stairs rising above the floor levels and curtain walling. A similar system of anodised aluminium and glass was adopted by Lasdun for his extension, but with more pronounced glazing bars, and with three pyramidal roof lights that are the clearest indication of the new work. Entrance doors in anodised aluminium surrounds. New entrance on Bedford Way, reached up steps, installed by Lasdun in 1993.

INTERIORS. The interiors are simple, but the quality of concrete finishes is exemplary throughout. The upper teaching spaces were designed to be flexible, and continue to be altered regularly - a tribute to the success of the original concept. The areas of special interest are the lift lobbies, where Lasdun's finishes can be seen at their best, and the entrance hall and principal stair to the lecture theatre. This staircase, in a deep well in which are set giant columns, is a version in smooth concrete with brick treds of his earlier ceremonial stair at the Royal College of Physicians in Regent's Park (LB Camden, grade I), with concrete walls and balustrade. The entrance hall, with pavioured floors, is on two main levels, corresponding to the different level of Bedford Way and the square behind. Separate stairs lead to bookshop on lower level.

While the University of London was discouraged from further expansion in the post-war years it was appreciated that certain departments such as Education, Law and the School of Oriental and African Studies required enlarged facilities. Lasdun was commissioned by the University of London in 1960 to develop the concept of a spinal range along Bedford Way and to its north which had been published by Sir Leslie Martin and Trevor Dannatt the year before. His task was to integrate the new buildings within an existing urban fabric, whose pattern of Georgian squares was belatedly being appreciated. Lasdun's scheme preserved more terraces than had the earlier proposals, and created a new square between his two buildings, much of it formed over the basement lecture theatre. For him, the relationship between the spine building and the SOAS pavilion is paramount.

The building was formally opened by the Queen in 1977. `Lasdun's architecture carries absolute conviction', Architectural Review, March 1980, p.148. Although a building constructed to a grid, it is Lasdun's interest in planes and interpenetrating masses and belief in pure form and modelling. His synthesis of the modern movement of the 1930s, inspired by working with Wells Coates and Berthold Lubetkin, and his unique understanding of the formalism of the later generation of the New Brutalists makes him a comparable figure with Louis Kahn and is demonstrated particularly well here. This building forms a contrasting mass to the square pavilion of Lasdun's extension to the School of Oriental and African Studies, with which it forms an exceptionally strong group.