Pall Mall Court, Including Raised Piazza and Podium to the West Side 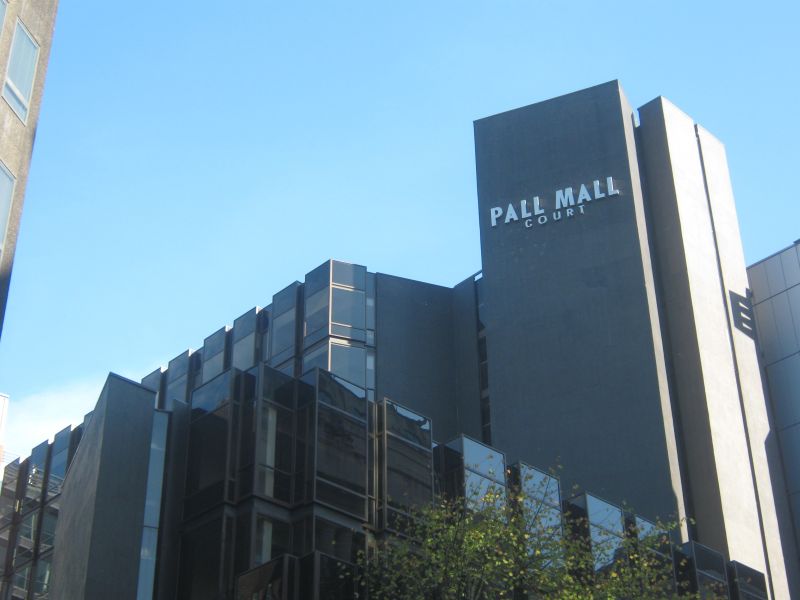 Entry Name: Pall Mall Court, Including Raised Piazza and Podium to the West Side

Commercial office building, 1966-8 by Harry Teggin of Brett, Pollen & Teggin in association with A H Brotherton and Partners, and the engineers, Cyril Blumfield and Partners. Reinforced concrete frame with grey-bronze ceramic-mosaic cladding to the service towers, and Staffordshire blue-brickwork and bronze painted-aluminium cladding to the rest of the building with bronze glass. Flat roofs with parapets. 6-storeys and 12-storeys.

PLAN: Pall Mall Court occupies a plot bordered by King Street to the south, Marsden Street to the north, Brown Street to the east, and the former Pall Mall to the west, which is now closed at this point and the road space occupied by the unlisted no.35 King Street. The plot is set upon sloping ground with the highest point being on the eastern side and the lowest on the western side.

Pall Mall Court has a 'Z'-shaped plan formed by a 6-storey block fronting King Street, a 12-storey spine block attached at a right angle to the rear, and a 6-storey block fronting Marsden Street. Attached to the eastern end of the King Street block is 73-79 King Street, which does not form part of Pall Mall Court and is not listed. Two service-core towers containing lifts and stairs are located at each change in axis, along with further stair towers at each splayed end of the building.

Occupying the infill space to the west side of the building is a raised, paved public piazza called Pall Mall Court. At the northern end of the piazza is a massive brick planter podium located over a basement garage. Set to the east side of the building and surrounded by Pall Mall Court's spine block, Marsden Street block and the neighbouring 73-79 King Street is a service yard accessed from Brown Street.

EXTERIOR: Pall Mall Court has a raised ground floor with a lower ground floor level (visible on the King Street and spine blocks) clad in blue brick. On the piazza side of the building this lower level appears sunken due to the raised nature of the piazza, and the floors above project out, creating a covered walkway to allow pedestrians to pass through the square under cover. The lower ground floor was originally intended to be blank, but changes in occupancy prior to the building's completion meant that windows were inserted.

The rest of the building's external elevations are composed of a series of fully-glazed square bays, stepped in tiers in places, and separated by narrow glazed recesses that give the appearance of oriel windows. The bays contain sash windows (now sealed shut) that originally enabled natural ventilation in sheltered conditions, and are of a repetitive pattern on a 6ft-2ft-6ft-4ft grid so that they are paired. The service-core towers, containing lifts and stairs, have blank facades clad with small ceramic mosaic tiles that were specially made to have a bronze flash on a gun-metal colour. The stairs are lit by narrow, vertical glazed bands that run up the full height of the towers, and the main service tower also incorporates windows on the west side facing into Pall Mall Court, which light the lift lobbies. Air-conditioning plants are located on the building's flat roofs.

KING STREET BLOCK: This 6-storey, 6-bay block, fronting south onto King Street is set-back from the street line on this side, due to objections raised during the design process from the owners of the neighbouring building at nos.73-79 who were concerned about the new building masking theirs. The top 2-storeys of the King Street block are set back from the main face on both the north and south sides behind a parapet; a design feature intended to reduce the scale and impact of the building upon its Victorian neighbours. As the block's west end is splayed the elevation is of 8-bays on the south side and 6-bays on the north side, facing into the piazza. Set back and attached to the far right of the south elevation is the building's main service-core tower, which is of 12-storeys and has an irregular angled shape that articulates the main spine and King Street blocks, and has later signage lettering attached to the west side. Attached in front of the service tower is the building's 2-storey, flat-roofed main entrance, which is fully glazed and has a raised ground floor entrance accessed by a flight of steps. Early-C21 revolving doors have been installed, along with new signage to a flat canopy above. A very narrow, gated alleyway to the left of the main entrance passes through the lower ground floor level and links King Street with the piazza. A further glazed entrance exists to the south-west corner of the lower ground floor. The roof of the main entrance projection is slightly angled with a drainage channel at the northern end, which was designed to allow rainwater to fall on to a stepped roof at the rear below, where another channel then flowed on to a further stepped roof below and then into a drain in the rear service yard. Unfortunately the roofs are not sufficiently angled to enable this process to take place successfully.

PIAZZA-FACING SPINE BLOCK: This block, which fronts into the Pall Mall Court piazza, is of 12-storeys and 11-bays with the upper 8-storeys projecting outwards. The northern end of the block faces onto Marsden Street and the upper 10-storeys project outwards over the street's pavement with angled sides. A service-core tower lies to the east side of the block and incorporates a secondary entrance to the raised ground floor, accessed by a flight of steps.

MARSDEN STREET BLOCK: This block is of 6-storeys and 6-bays with a stepped elevation to both north and south sides. Later signage lettering in the same style as that to the main service tower adorns the blank stair tower at the east end of the block. Attached to the western end of the Marsden Street block is the north end return of the spine block and attached service-core tower, as described above.

PIAZZA: Set to the western side of the building is a raised piazza that was originally accessed via flights of steps from both King Street and Marsden Street; the stair off King Street has since been replaced by a ramped access, and the stair off Marsden Street has been altered, reduced in width and a ramp inserted alongside. The piazza is paved in Staffordshire blue-brick and stone, and the northern end is occupied by a very large and high, blue-brick podium planter containing trees and tall plants. The planter occupies approximately one third of the overall piazza space and located underneath is a car park, which is accessed via a roller-shuttered entrance in the north side of the planter off Marsden Street. The far western side of the piazza, beyond the podium, has lost its original Staffordshire blue-brick and stone paving, and is not considered to be of special interest.

INTERIOR: Internally screed and board floors can be found throughout, except in the stairwells and lift lobbies, which have blue-brick floors (many of the floors are hidden under later coverings). The service-core towers contain original painted-brick and concrete, dog-leg stairs with simple timber and metal rail balustrades, and stairwells incorporating original smoke chutes to enable smoke to escape out of the building and aid evacuation. Both the stairwells and upper lift lobbies retain their original mosaic-clad walls, which are in the same style as those to the exterior; the lifts themselves have replaced cabs and machinery.

The remaining areas of the interior have been altered and/or modernised and are not considered to be of special interest. These include the office floors, which are largely plain and open plan, and have been modernised and refurbished, including replaced lighting, modern suspended ceilings, new radiators in the window bays, and the installation of new services in the north-east corner of the King Street block. The principal communal areas have also been altered, including the main ground-floor lift lobby, entrance foyer and toilets on each floor. The main entrance foyer is double-height and originally had a blue-brick floor, but this has since been replaced by a tiled floor. The walls were also originally clad with mosaic tiles in the same style as those to the exterior, but these have been removed, along with a small mosaic sculpture by Josephine Reid, which originally adorned one of the entrance foyer's walls and incorporated Sun Alliance's corporate logo of three interlocked hexagons (depicted on a photograph dating to 1969). A derelict principal ground-floor and lower-ground floor space in the King Street block contains a large, central open well overlooking the lower-ground floor, which is accessed by a stair located at the eastern end of the well. The basement below contains a reinforced concrete vault (retained from the space's previous use as a building society) and a small goods lift, which travels between the lower-ground and ground-floor levels.

Pall Mall Court was constructed in 1966-8 to the designs of Harry Teggin of Brett, Pollen & Teggin in association with A H Brotherton and Partners; the engineers for the project were Cyril Blumfield and Partners. The building was commissioned as a prestige headquarters office building for London Assurance Ltd. London Assurance was taken over by the Sun Alliance Group as work on the building began, resulting in the building being in multi-occupation upon its completion instead of its originally intended sole use.

Teggin conceived the building 'to have the impact of a jet stone by the use of bronze glass, sharp angles and opaque facets', although the cleaning of the surrounding stone buildings has subsequently tempered its illusional effect. Pall Mall Court won a Civic Trust Award and the RIBA Regional Award in 1970. In c2003 the building underwent a programme of refurbishment, including some alteration works.

Pall Mall Court is listed at Grade II for the following principal reasons:

* Architectural interest: it is a good example of a high-quality post-war office building with a striking design that is resolutely of its time, but which respects, and responds well to, its site and Victorian streetscape

* Design interest: its unusual Z-shaped plan and stepped elevations form a strong massing and composition, with rows of oriel-style windows creating a rhythmic pattern and movement across the principal facades. This strong level of stylistic detailing is enhanced by the building's use of bronze painted-aluminium and glass, and grey-bronze mosaic cladding, which create a dramatic contrast to the other buildings on King Street