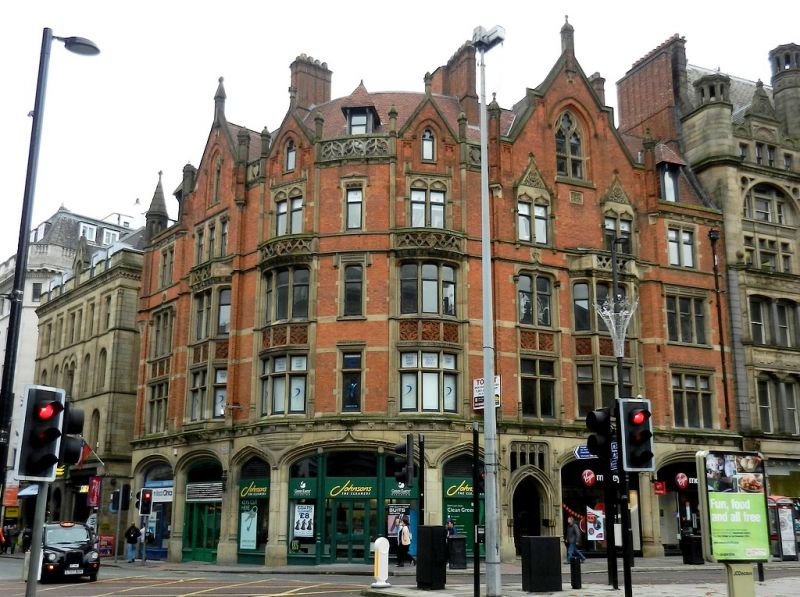 Includes: Nos.59 AND 61 CROSS STREET.
Shops and offices. 1877, by Pennington and Bridgen; altered.
Red brick with sandstone dressings, red tiled roof. Curved
trapeziform plan on end-of-block site. Gothic style. Four
storeys and attic, eight windows including corner and Cross Street
side; stone ground floor and frieze with Tudor-flower and
grotesque ornament; slender chamfered shafts of brick and
stone rising to a large gable in each main facade and two small
gables over the corner, all with tourelles and finials and
linked by open-work parapets, stone spirelet to end of Cross
Street facade, steeply-pitched roof with small hipped dormers
and large clustered chimneys. Ground floor of each facade has
two wide elliptical-arched windows with moulded heads, a
2-centred arched doorway to the left of the Princess Street
facade, with carved enrichment and traceried overlight (C20
shopfronts inserted in corner); 1st and 2nd floors have tiered
mullion-and transom windows to the gabled bays, those in the
main facades canted and those at the corner bowed, all with
terracotta traceried panels between the floors and elaborately
traceried open-work parapets, and various other transomed
windows; 3rd floor has mostly 2-light windows with Gothic
enrichment, including 2 in the Princess Street facade with
carved stone gablets; gables have 2-centred arched windows
with tracery.